Rosberg X Racing was victorious in the Extreme E semi-final in Saudi Arabia and will face Lewis Hamilton’s X44 team and the Andretti United concern in the inaugural event finale.

Johan Kristoffersson took the race start from the far right of the starting gate, on paper the least desired slot, having had the last pick for qualifying third following a time penalty on Saturday.

Alongside polesitter Sebastien Loeb for X44 and second-starting Carlos Sainz Sr, all three made comparable full-throttle launches to run side-by-side on the approach to Turn 1.

Kristoffersson used the so called ‘hyperdrive’ power boost off the line, the cars’ power wound down from 400kW to 225kW to manage battery temperatures in the AlUla desert.

Sainz squeezed Loeb on the inside of the 5.48-mile course, the two making contact, with the Acciona Sainz vehicle sustaining damage on its rear-right quarter panel.

That allowed Kristoffersson to hold the wide line and sweep across the front of his rivals into the lead, with Sainz and Loeb at an early disadvantage due to the dust kicked up by the RXR car.

From there, Kristoffersson stretched his lead over Loeb and Sainz before coming in for his driver change to hand over to 2016 Australian rally champion team-mate Molly Taylor.

After the pair lost pole position on Saturday for a 60-second time penalty for exceeding the 30km/h pit speed limit when the standardised software failed to engage, Kristoffersson slowed the car himself to hand over to Taylor.

Taylor then resumed in clean air and with good visibility to manage the lead to the finish, claiming the spoils and the first spot in the afternoon final by 28.91 seconds.

Cristina Gutierrez, who swapped for Loeb in the Prodrive-run X44 machine, consolidated second place to also progress through to the final.

Meanwhile, Acciona Sainz’s weekend ended early after Laia Sanz took over from Sainz to hold third position to the finish, a further 37.9s behind Gutierrez. 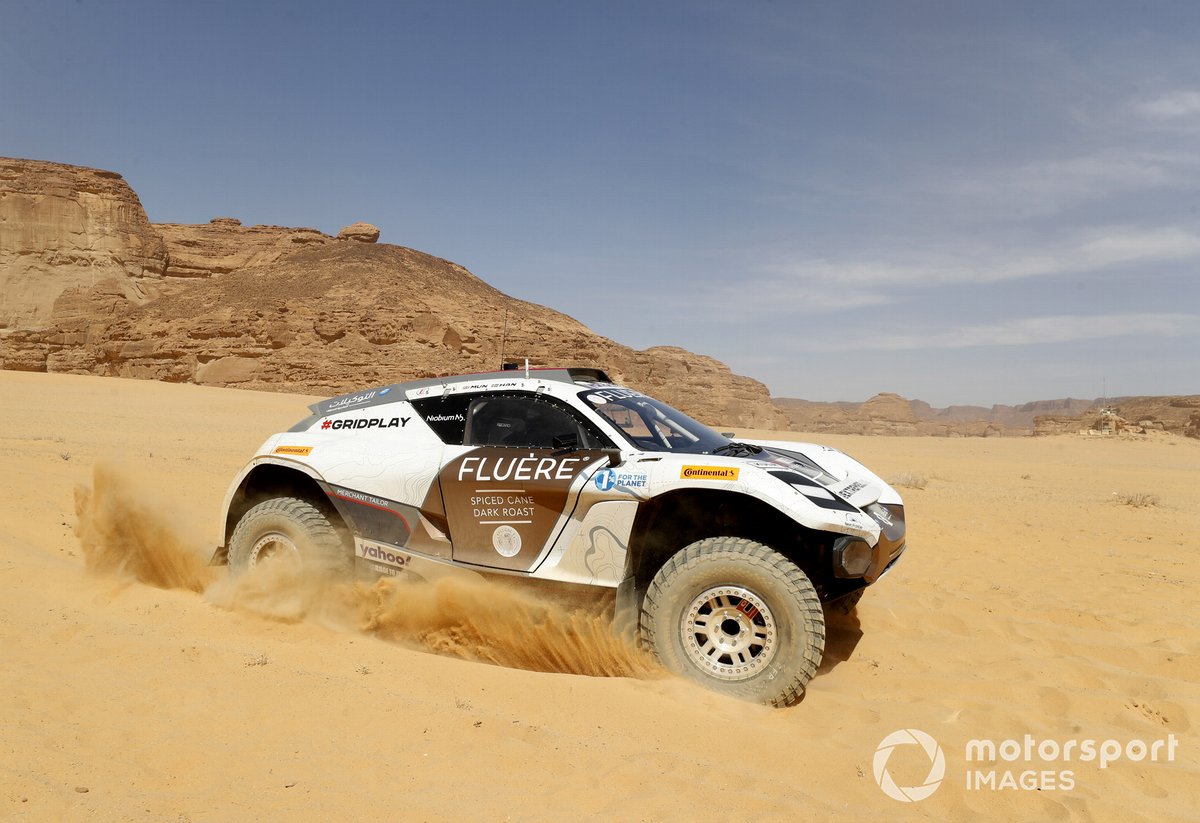 RXR and X44 will be joined in the final, for which the grid positions will be decided by a fan vote, by the Andretti United squad after its victory in the so called ‘Crazy Race’.

The 2019 World Rallycross champion Timmy Hansen took the start from the effective pole position on the inside, made a sound getaway to steam into an unrivalled lead.

Hispano Suiza starter Oliver Bennett was sluggish off the line but recovered well to run alongside Jenson Button’s JBXE machine on the entry into Turn 1.

To avoid the dust, Button opted for a wide line but left himself with further to travel and to run over the unused rutted surface, which meant he returned to the racing line in third.

Bennett could not make inroads on Hansen’s advantage, the Swede pulling in for a clean driver change with co-driver Catie Munnings, with the pair already resuming the race as JBXE finally pitted.

Munnings’ clean run to the finish assured Andretti United of the last slot in the final, while Hispano Suiza will finish the event in fifth - with Acciona Sainz classifying fourth overall.

Mikaela Ahlin-Kottulinsky traded places with Button aboard the JXBE machine.

Despite her impressive qualifying pace, her deficit to Hispano Suiza doubled come the finish, ending up 36s adrift of the second-place squad.