Catie Munnings and team-mate Timmy Hansen put an end to Rosberg X Racing’s 100% record in the third round of the fledgling championship thanks to a 4.159s victory.

The Andretti United car, which won the second semi-final to progress to a first-ever five-way decider, lined up on the far-right side of the grid with Munnings electing to take the start.

Munnings enjoyed the smoothest launch initially as the JBXE and Acciona Sainz machines, started by Kevin Hansen and Laia Sanz, traded paint, while Sebastien Loeb in the X44 machine and Molly Taylor for Rosberg X Racing also collided over the early crests.

Sanz was flicked wide by one of the jumps to fall back to last place as Munnings ran down the inside of the first corner and pinned the 400kW hyperdrive boost to nab the advantage.

Nine-time World rally champion Loeb then activated his power hike to squeeze into the gap between Taylor and Munnings to make it a three-way sprint to the following tight left-hander.

Munnings backed off as Loeb took the position with Taylor in second, while the JBXE car ran very close to the inside waypoint flag to cutback into the leading train as the course moved for a single file run around the shrubland sector.

With Loeb in prime position for X44, he was able to soon pull away, extending his lead from 2s up to an eventual 18s when he completed his lap and ran into the driver swap zone. 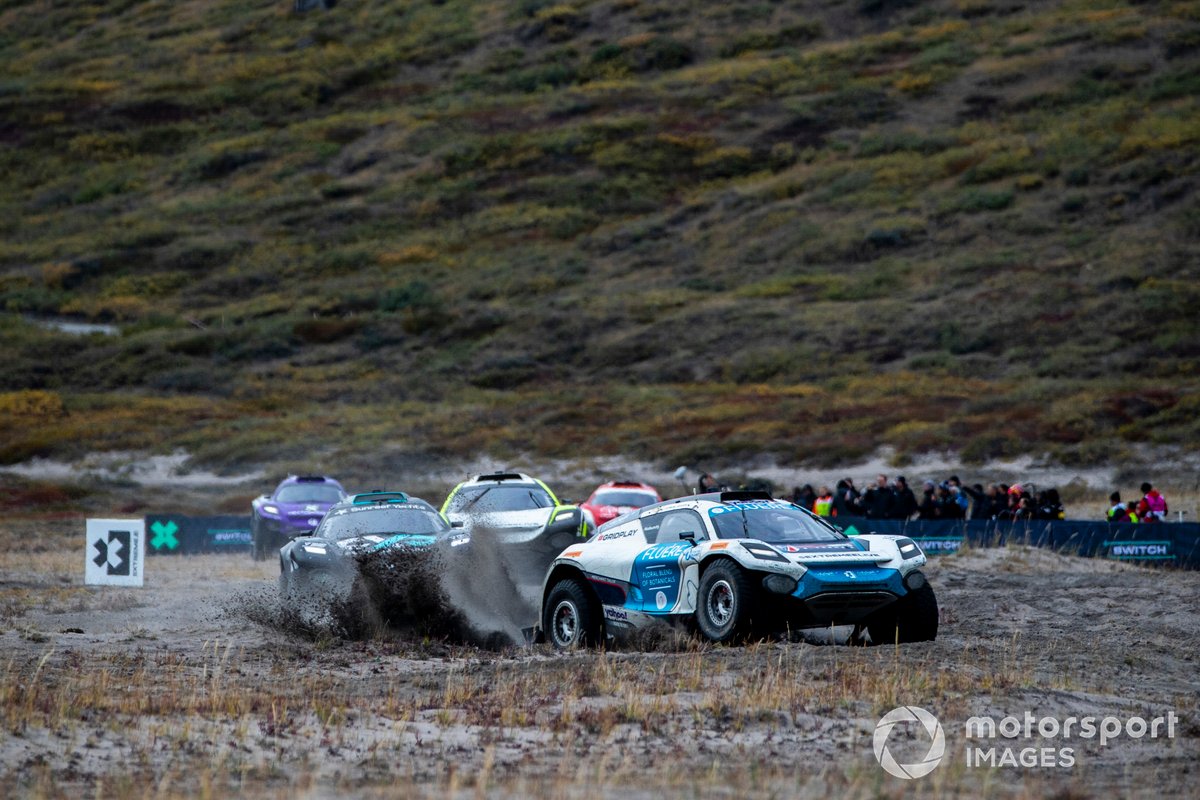 Taylor held second as Hansen hit a couple of sand banks to give Munnings some respite.

While Loeb appeared to be checking out in front, Munnings, Hansen and Taylor ran in a train over the ‘rock garden’ and then arrived nose-to-tail to the driver changeover area.

However, the X44 run was blunted by a right-rear puncture sustained late in the lap.

Loeb and one crew member began the tyre change, which allowed Timmy Hansen to take over from Munnings and grab the lead ahead of Johan Kristoffersson, who replaced Taylor.

He effectively leapt into the lead momentarily with huge air over a crest, but the massive impact on landing forced yet another car shutdown.

That earned Hansen a healthy 2.6s cushion over Mikaela Ahlin-Kottulinsky, aboard the JBXE car, and he then thumbed hyperdrive to build his advantage before snaring the victory.

Ahlin-Kottulinsky delivered second to earn Jenson Button’s team its best result to date while third place was settled in a near photo finish. 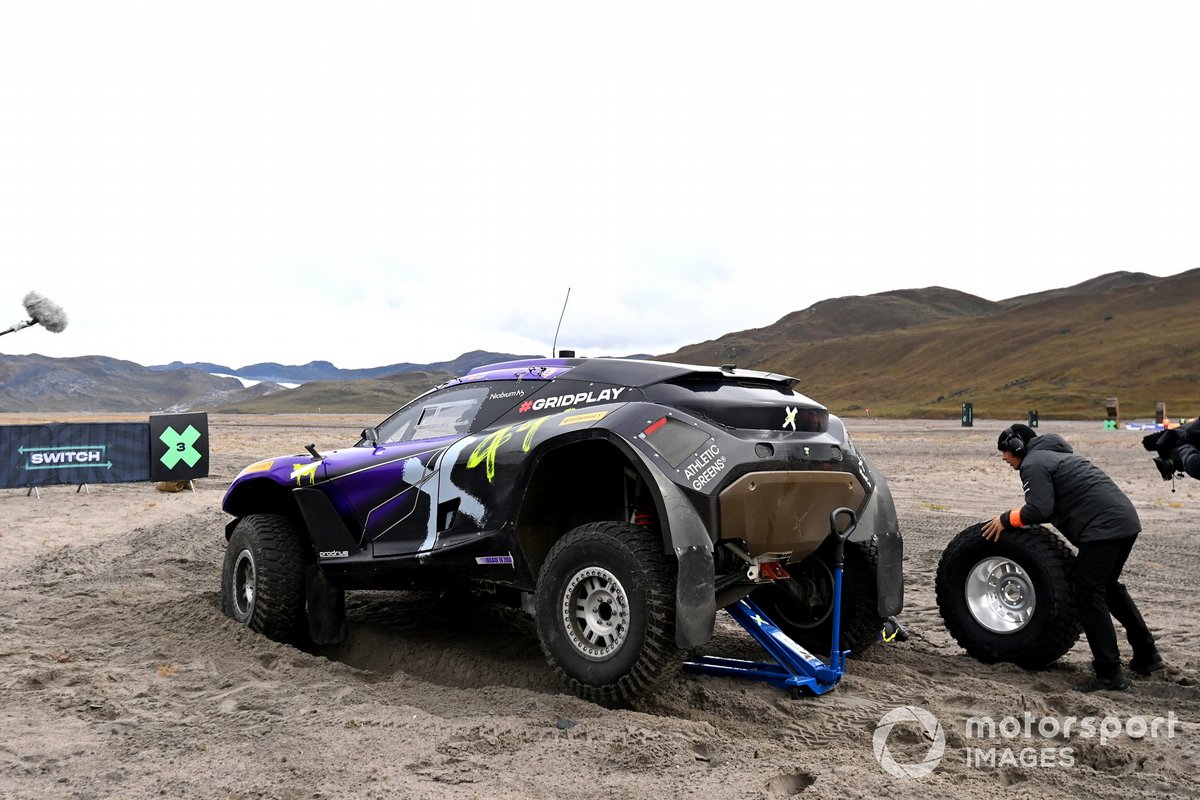 Carlos Sainz Sr and Cristina Gutierrez, swapping for Loeb, had exited the driver swap zone side-by-side and even appeared to make contact.

While Sainz could pull away over the lap, Gutierrez cut the last waypoint flag to close on the two-time World Rally champion and they crossed the line only five hundredths apart.

The final place on the podium eventually fell to the Acciona Sainz squad, however, with X44 earning a suspected 5s penalty for missing the checkpoint.

Kristoffersson managed to finally restart his car and would finish the final more than a minute behind Andretti United. However, Rosberg X Racing still retains the standings lead by nine points over X44.

The JBXE team had earned the last grid slot available for the final after winning the so called ‘Crazy Race’ shootout despite a 30s penalty when their rivals hit mechanical maladies.

Button’s driver Ahlin-Kottulinsky took the race start from the far-left side and led over Chip Ganassi Racing’s Sara Price and the Xite Energy Racing car from a solid launch.

The Xite machine of Christine Giampaoli Zonca initially dropped back through the first defined corner but was soon able to catchup to Price through the narrow shrubland section.

She then dived for second place as the course ran down to the riverbed with Price retiring shortly after when the front-right steering arm failed, and the wheel towed inwards.

Price did manage to drag the car off line and sat aboard for the remainder of the heat. 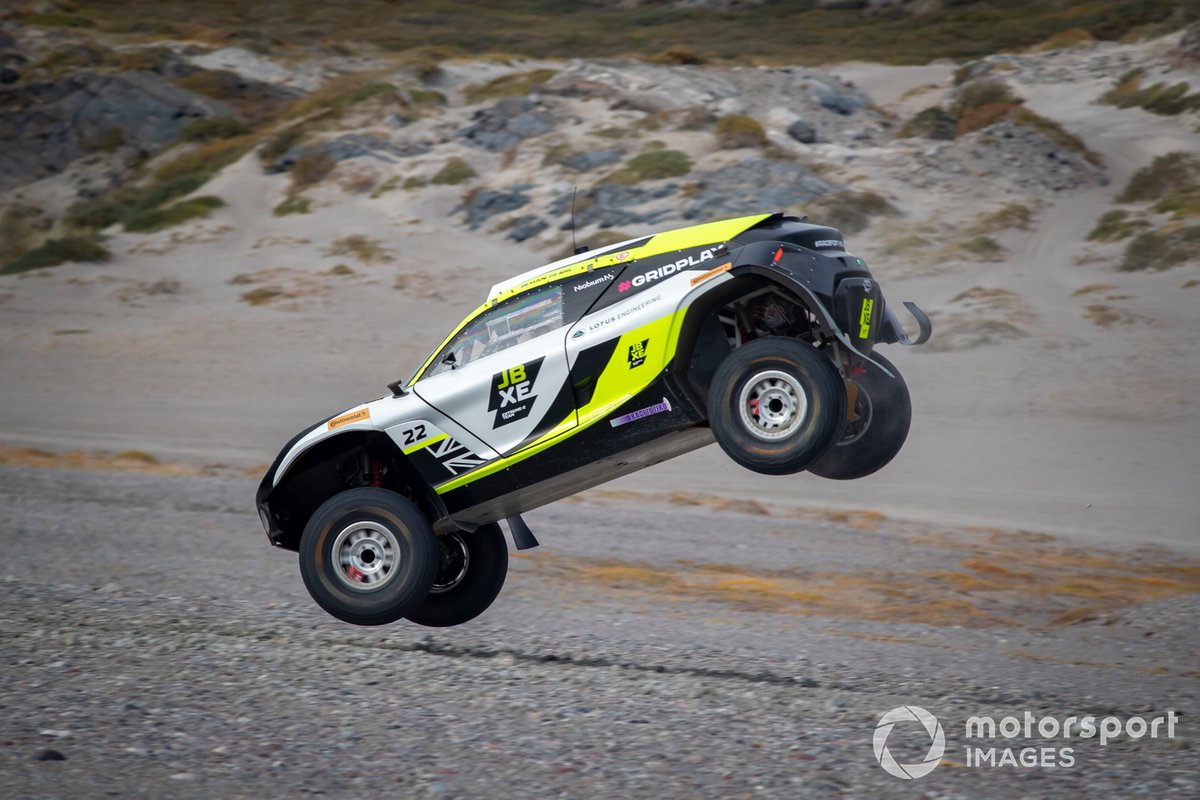 Ahlin-Kottulinsky brought the JBXE machine into the driver change zone with a 4s lead but the team was delayed by a 30s penalty for using a seventh tyre after a string of punctures throughout the event.

It meant Bennett could escape in the Xite car with a 23s lead as Kevin Hansen closed rapidly for JBXE, which including hitting a flag but avoiding a reprimand as it was not knocked over.

The difference was down to 10s come the halfway point of the lap, but Bennett’s chances of reaching the final were scuppered when he landed heavily on the front axle after a crest.

His car soon slowed and while he attempted to reset it, Hansen screamed his way over the line.