Simon Pagenaud used a clever fuel strategy to win the third round of IndyCar's iRacing Challenge at a virtual Michigan International Speedway, while a guesting Dale Earnhardt Jr finished third

Pagenaud, the 2016 IndyCar Series champion, was followed home by Team Penske team-mate Scott McLaughlin and retired NASCAR driver Earnhardt, all of whom reached the finish of the 85-lap race with only one pitstop under green.

Defending Indianapolis 500 winner Pagenaud only inherited the lead with four laps to go when Zach Veach ran out of fuel and won by 13s, having rarely featured at the front on the two-mile Superspeedway track - which hasn't been part of the real IndyCar schedule since 2007.

Pagenad thus becomes the third different winner in as many rounds of the virtual series created to replace real IndyCar racing amid the coronavirus pandemic, after Sage Karam (Dreyer and Reinbold Racing) and Supercars champion McLaughlin won the opening rounds at Watkins Glen and Barber Motorsports Park.

Karam was involved in the battle for the lead for much of the race with the third Team Penske entry of Will Power (below) and Formula 1 convert Felipe Nasr, who has been racing in the virtual championship after his planned IndyCar debut with Carlin at St. Petersburg was cancelled. 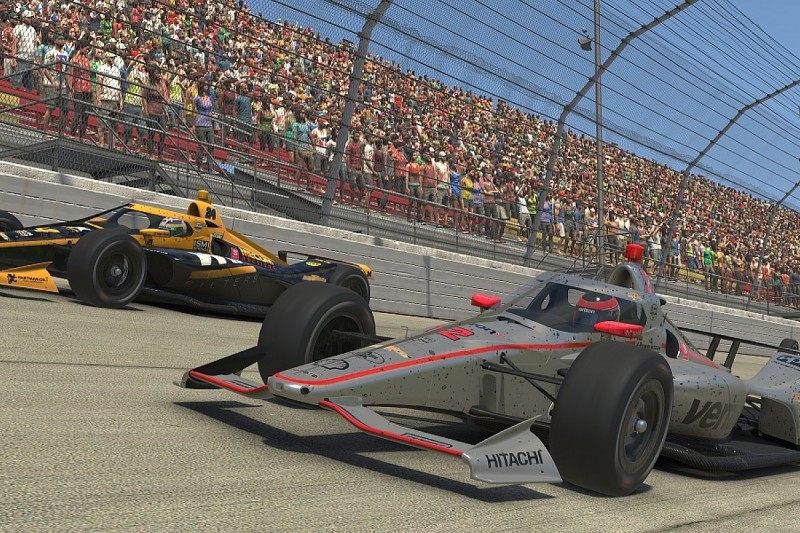 Chip Ganassi Racing polesitter Marcus Ericsson led from Power and Nasr at the start, before a caution for an incident involving Marco Andretti, Felix Rosenqvist and Robert Wickens brought a temporary halt to the race, allowing drivers to stretch their fuel mileage.

When racing resumed, 2012 series champion Power, Karam and Nasr led the chasing pack headed by Graham Rahal, before Karam began the first round of pitstops on lap 40.

He was followed one lap later by Power, but oval racing rookie Nasr dropped out of contention as he lost control while braking down to the pitlane speed limit and was collected by Juncos Racing's Kyle Kaiser.

Rahal was the first to commence the second round of stops on lap 70, and as the rest of the lead group including Karam and Power followed suit, Pagenaud began his climb up the order.

Earnhardt Jr admitted before the race that he was focused on staying out of trouble and avoided the early carnage to run second until McLaughlin passed him in the closing stages.

Power and Rahal completed the top five ahead of Jack Harvey (Meyer Shank Racing) and Alexander Rossi (Andretti Autosport), while Karam faded to 14th at the finish.