Realteam Hydrogen Redline has won the 4 Hours of Monza, the opening round of the Le Mans Virtual Series, as Jeffrey Rietveld, Dani Juncadella and Michal Smidl held off GPX Rebellion Williams and Floyd ByKolles-Burst. In GTE, the Porsche Esports Team car driven by Mitchell deJong, Mack Bakkum and Martin Kronke was dominant.

The opening round of the inaugural Le Mans Virtual Series took to the venerated Autodromo Nazionale Monza for four hours of live multi-class racing.

The RE8G Esports ORECA 07 of Erhan Jajovski clinched pole position a day earlier at the head of the field with Esports stalwart Kevin Siggy leading GTE class for BMW Team Redline after placing the car in first during qualifying.

No one was sure how the grid of 38 cars would manage racing down to the Variante del Rettifilo on the first lap. With four hours of racing ahead, and three drivers per car, caution should have been the priority on the early laps. 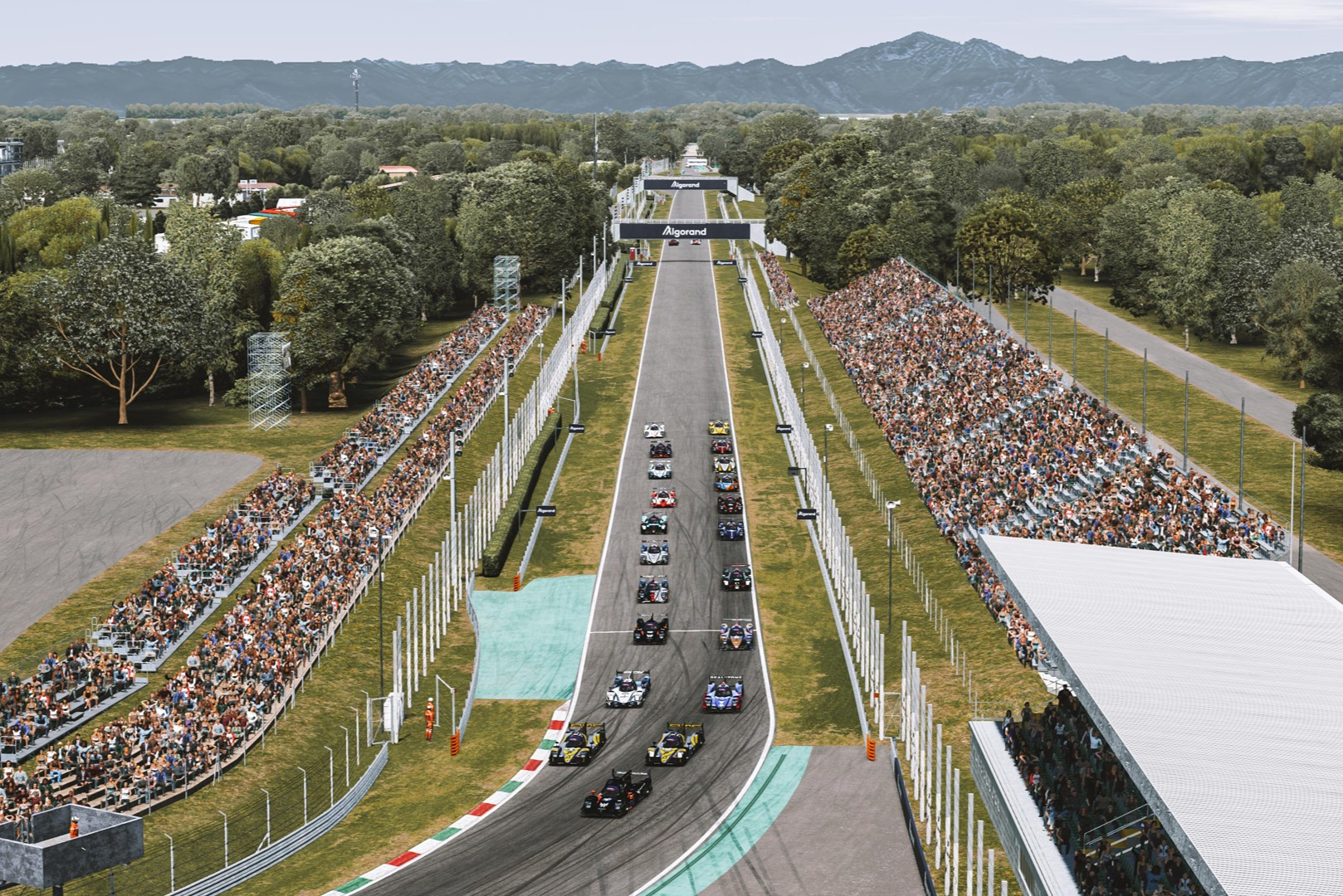 The LMP2 class was a model of good behaviour, with Jajovski controlling the field when the lights went green. In GTE, starting a few moments later, Joonas Raivio shot out from fourth to snatch the lead before the first corner, with Timotej Andonovski for TESLA R8G Esports pulling a similar move to take second from eighth on the grid.

That battle would also result in frustration minutes later, as the #77 Porsche Proton Competition piloted by Kevin van Dooren and the fast-stating Andonovski tangled at the Variante della Roggia, sending them down the order and resulting in a drive-through penalty for the TESLA R8G driver. 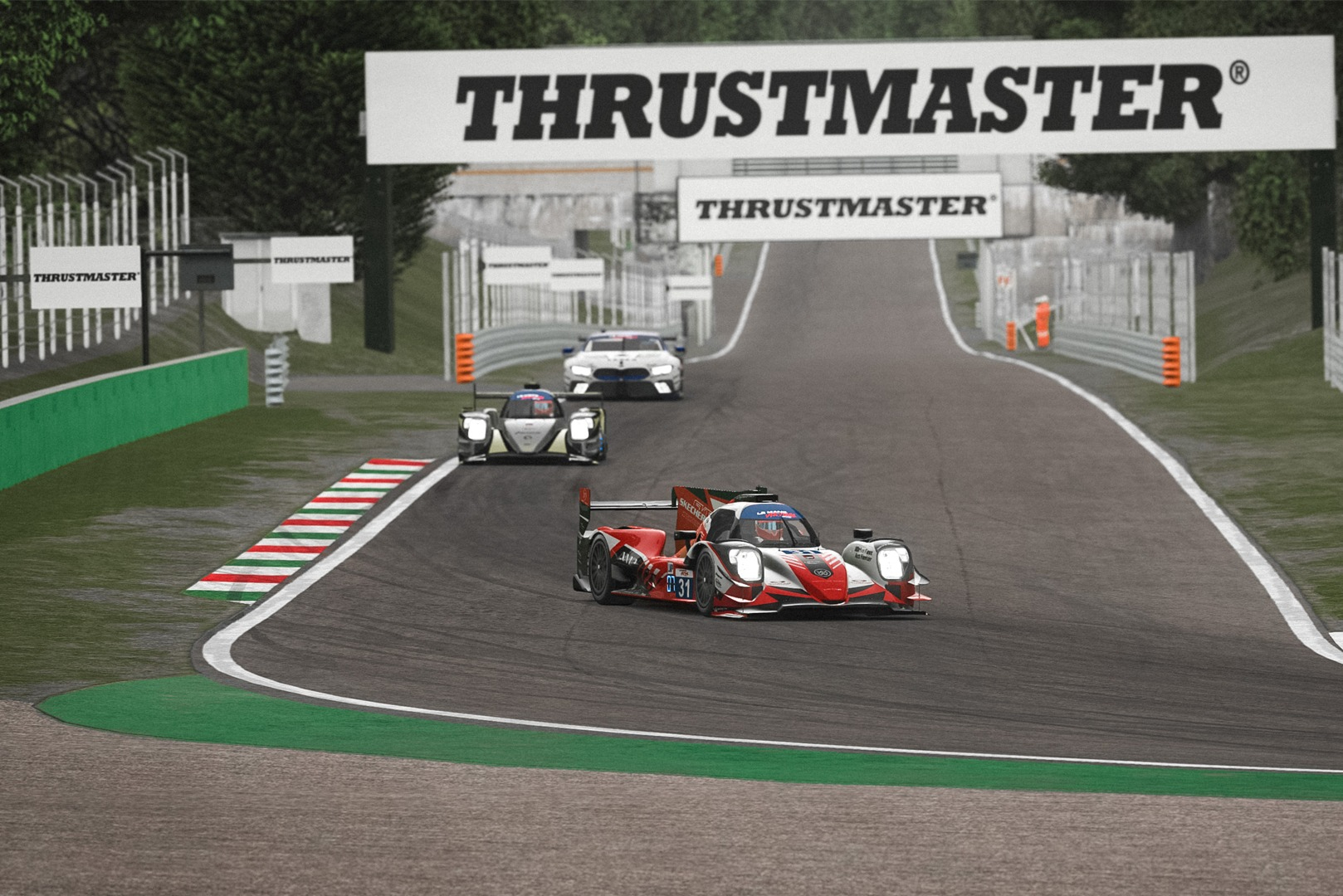 Nuno Pinto in the Team Fordzilla LMP2 car also received a drivethrough for a false start.

At the front of the pack, Jesper Pedersen for Floyd ByKolles-Burst was hunting down Jajovski, closing to well within half a second. In the fight, the top two went wide into the opening corner allowing GPX Rebellion Williams driver Marcell Csincsik to make it a three-way fight at the half-hour mark.

The first round of LMP2 pitlane visits started at 34 minutes, with Jajovski extending his advantage out front. 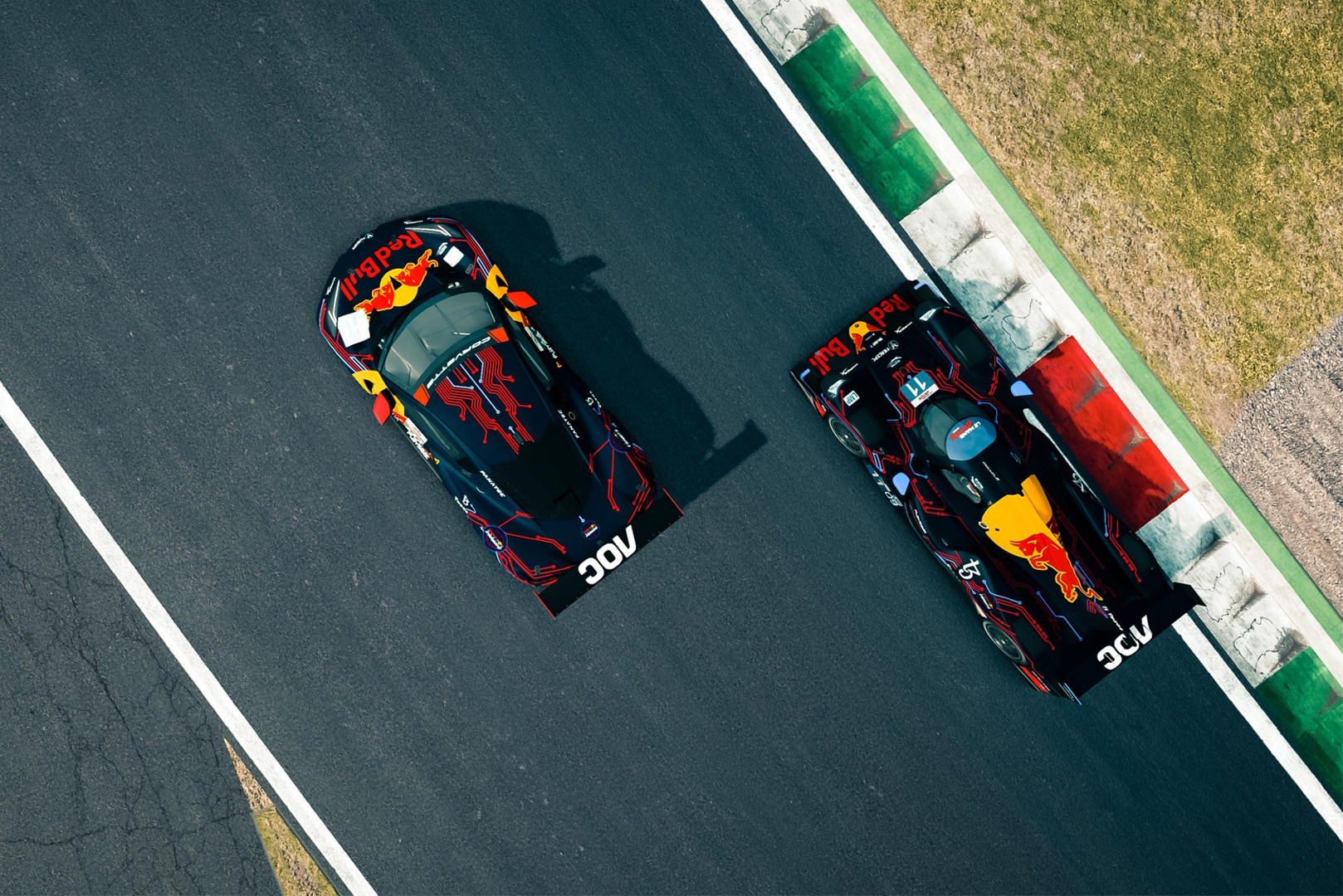 The GTE class continued to deliver close battles, with Porsche Esports Team driver deJong making his way to the head of the field after a tentative start. The first pitstops didn’t arrive until the one-hour mark.

R8G Esports then switched drivers, Gordon Mutch taking the wheel of the leading #8 machine. Sadly, after a visit to the gravel on the exit of the Variante della Roggia, he spun and while parked across the track, was hit by the #61 Porsche of Alister Yoong and the #38 JOTA car of Ferris Stanley.

Jonathan Aberdein, now taking over the #44 from Michi Hoyer, avoided the chaos and took the lead, while Mutch and Stanley returned to the pits with heavy damage.

Aberdein didn’t have it easy though, as Jeffrey Rietveld was all over the South African racing driver. The Realteam Hydrogen Redline driver eventually took the lead on the inside of Turn 1 after several attempts around the outside of the Curva Alboreto. 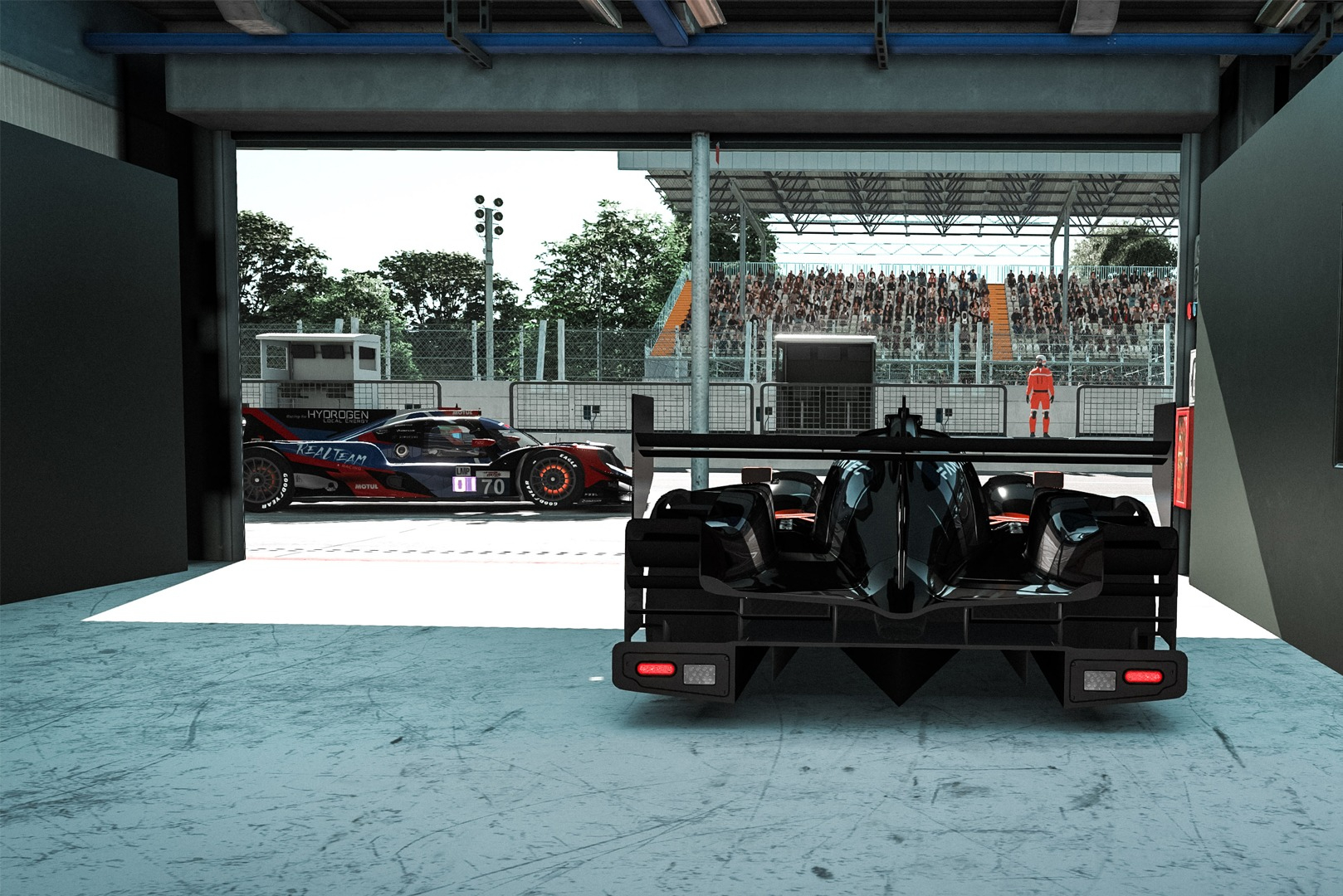 As the race progressed, disaster struck Marco Saupe in the Team WRT SIMTAG Esports car as he was hit from behind while stationary in his pit box by the Team Fordzilla entry driven by Luke Browning, damaging both vehicles.

The drama continued for the Team WRT SIMTAG Esports, later setting on fire around the Curva Grande and into retirement.

With 100 minutes left on the clock, the race-leading #70 car pitted ahead of a frantic three-car battle for second, at this time headed by 2021 ELMS champion Yifei Ye.

Soon after, race director Eduardo Freitas issued a stern reminder that blue flags need to be respected, as cars within each class started lapping each other. The eighth-placed Beitske Visser in the Mahle Racing Team entry was the last car on the lead lap approaching the final quarter of the race.

In the final hour, the GTE leading Porsche had checked out with a 30-second advantage, putting the focus on the two duelling BMWs for second position. The BMW Team GB M8 driven by Sami-Matti Trogen was ahead of BMW Team Redline’s Enzo Bonito, but after a flash of the headlights, Bonito made it through under brakes at the first corner. 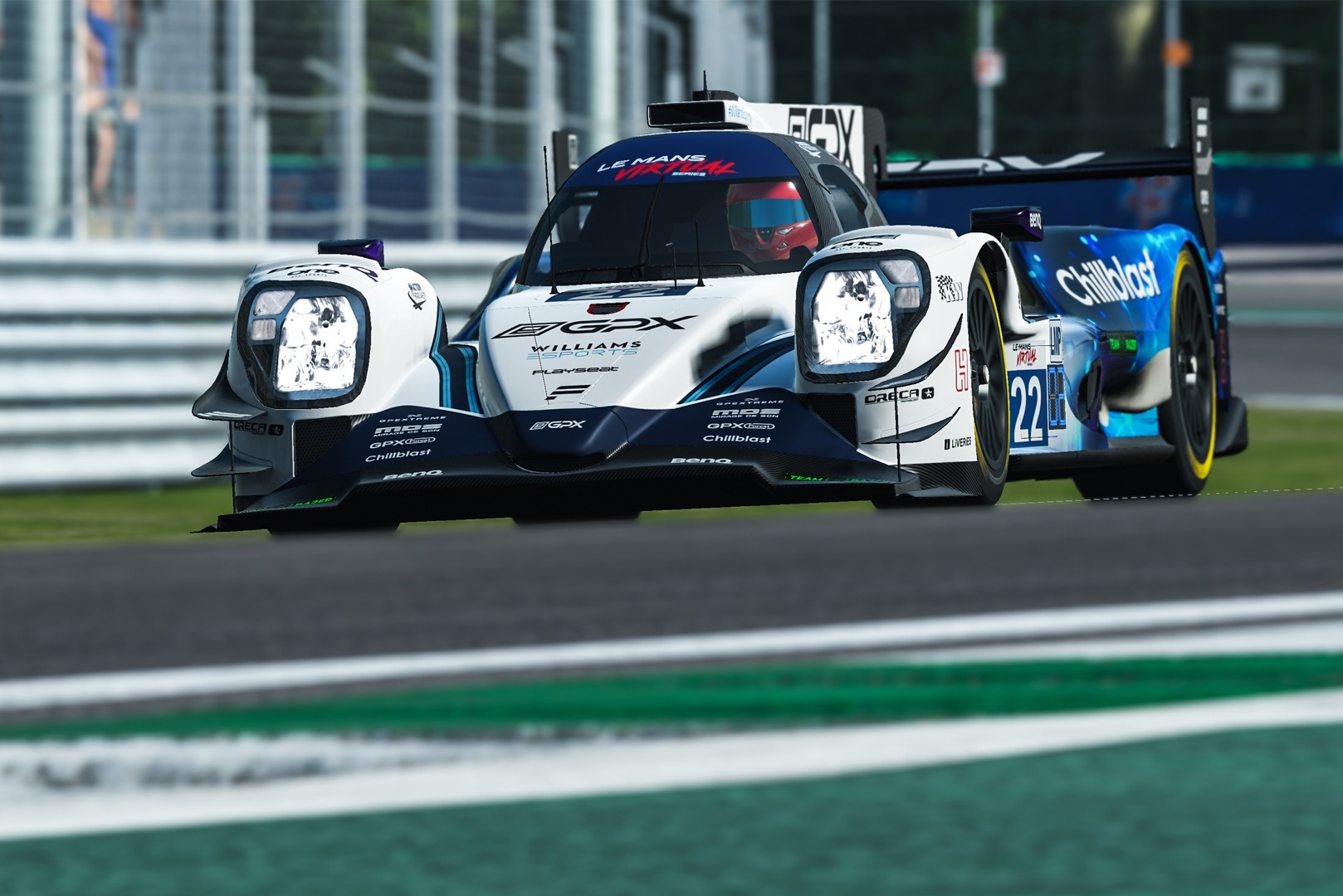 With the race in its final hour, Juncadella was now in the leading Realteam Hydrogen LMP2 car and kept the gap to the chasing pack to 17 seconds – the hard-charging Jiri Toman, a race winner in GT Pro Series this year, in second at this stage for GPX Rebellion Williams. The leading GTE Porsche pitted one lap earlier than the chasing BMWs but regained the lead once they had taken their fourth stop.

With just under 30 minutes left, the final stop for Toman was queued up. Pitting later than the leader meant that his pitstop was shorter and saw Juncadella’s lead cut to just over eight seconds.

This set up a unique proposition for the final stint, as the race was led by a pro motorsport driver, defending against an on-form Esports expert. Similarly, in GTE, BMW Team Redline had opted for longer stints than its rivals throughout the race, exiting the pits for the final time in second, just two seconds behind the leading Porsche driven by Mack Bakkum.

Juncadella was more than up to the task, however, winning with his team-mates Rietveld and Smidl for Realteam Hydrogen Redline by 7.8 seconds. Second-placed Toman ultimately came under pressure from the current GT Pro Series championship leader Jernej Simoncic, but an untimely lapped GTE car dissolved the battle. 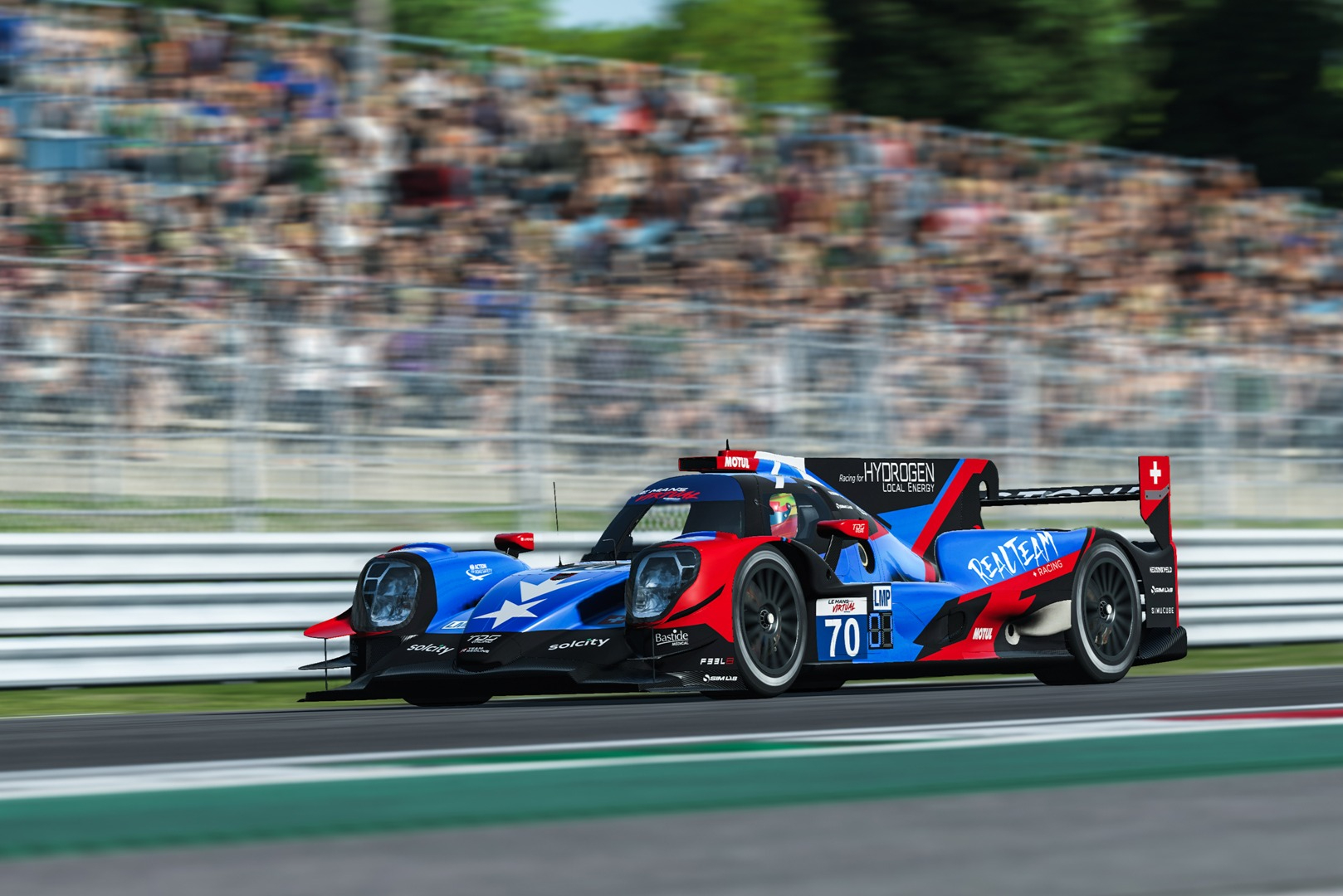 “We had a really, really smooth race. That was the key,” said the current DTM driver Juncadella.

“Jeffrey did an amazing first stint and Michal took over his tyres, which is never easy. Towards the end, I just had to drive it home. A lovely race.”

Meanwhile, in the GTE class, it was a masterful performance by the manufacturer-backed Porsche team, balancing the lead from the opening 30 minutes until the end.

“Mitchell and Martin did such a great job before I took over the car, in the end, it was really about bringing it home,” explained Mack Bakkum.

“We did get a surprise in the end with BMW Team Redline when they skipped tyre changes, but we knew that even if they came out slightly ahead we would have had a big pace advantage.” 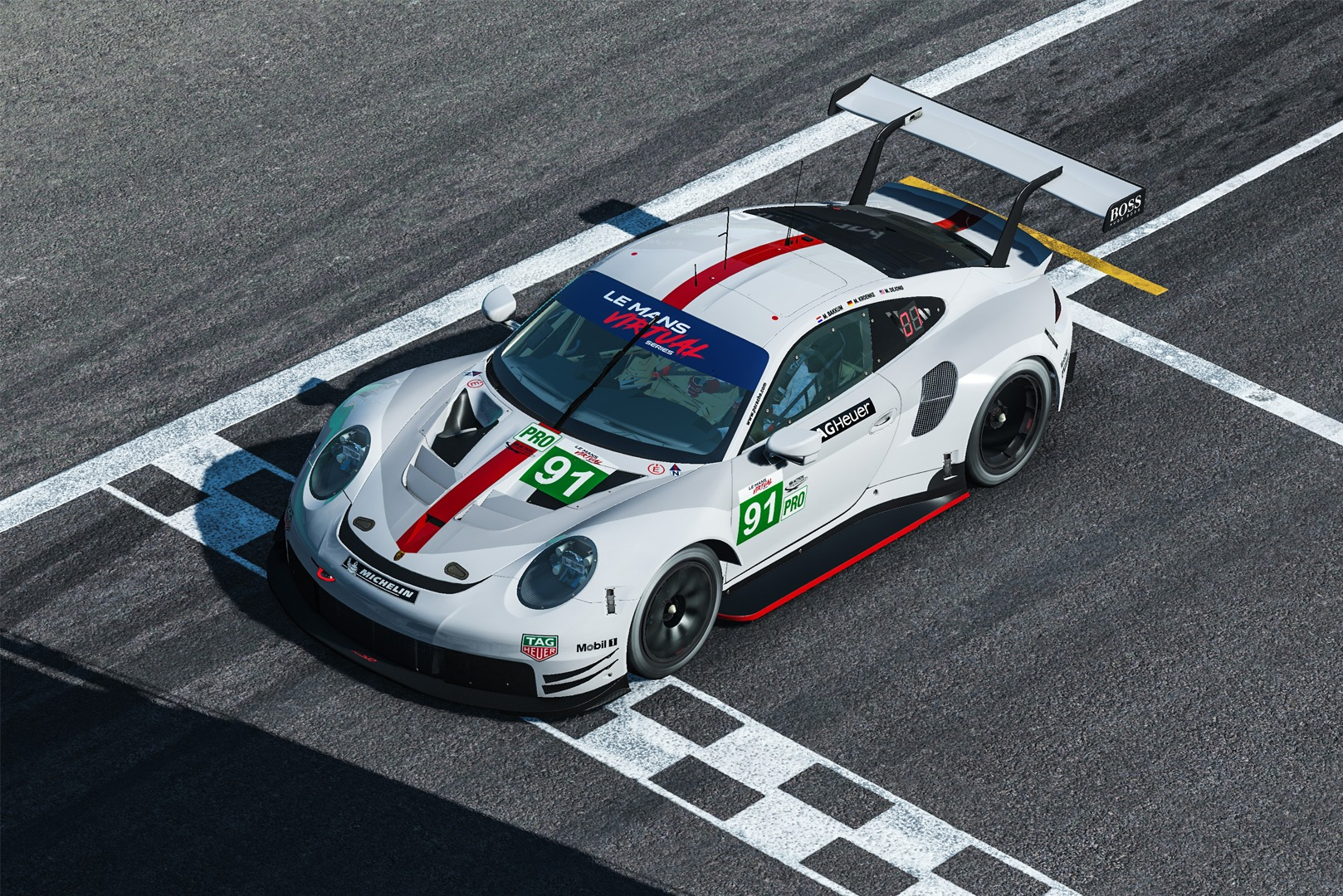