Jack Keithley and Florian Hasse claimed the Sprint and Feature race wins respectively in the second round of the 2021 ADAC GT Masters Esports Championship.

Nikodem Wisniewski was the one to pounce on these errors most successfully and thus was the German’s closest challenger in the points standings heading into round two at the Red Bull Ring.

There was perhaps some oversight as to just how impressive Marko Pejic was on his debut in the championship. A front-row start in the Sprint and a podium in the Feature. The only blot on his copybook was the poor launch that crippled his first race hopes. 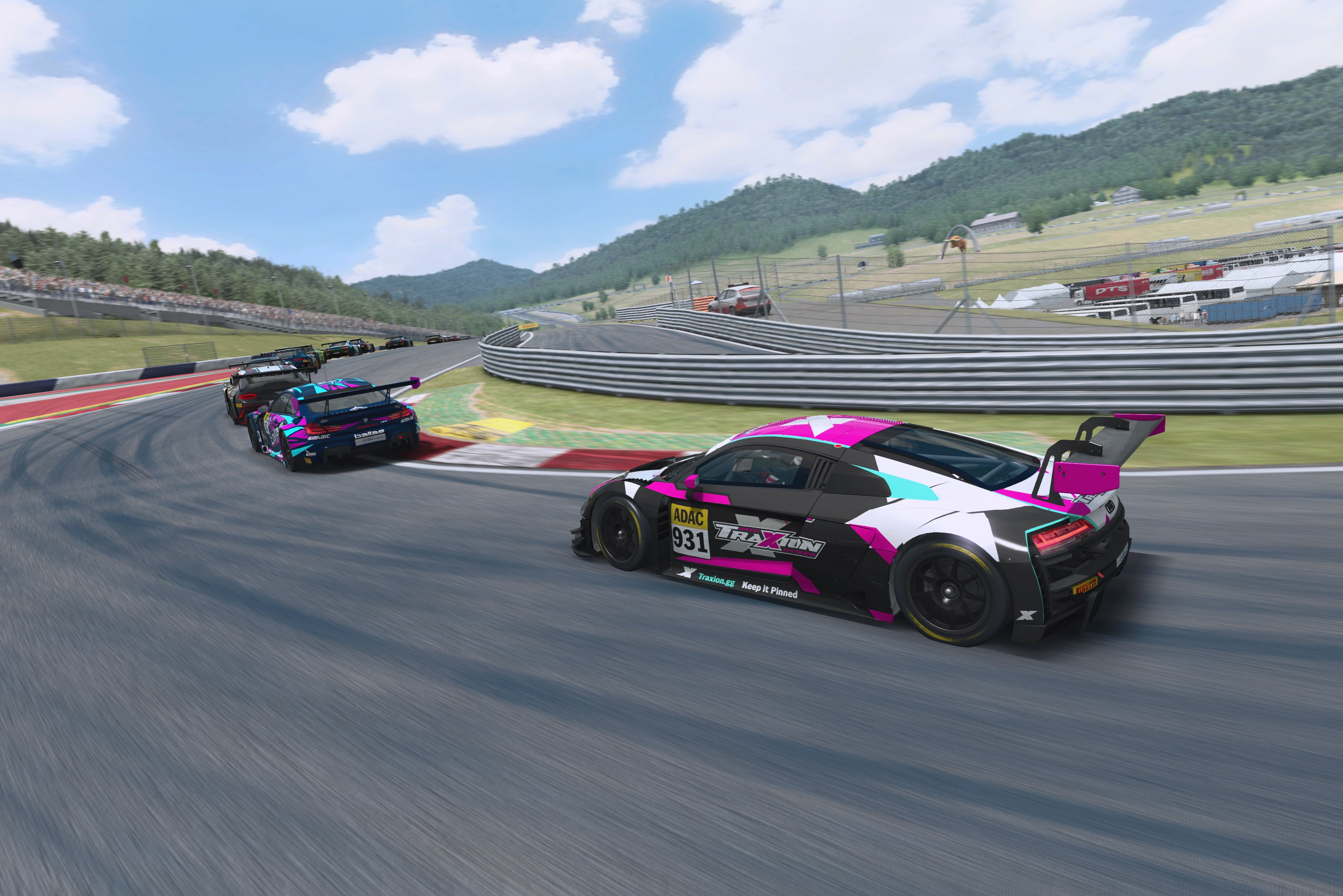 The German continued his strong start to the season with pole position in Austria albeit by finer margins than Lohner found himself with a week ago. The reigning champion was good enough for third but frustratingly found himself a thousandth behind fellow 2021 race winner Wisniewski.

For all the praise he rightfully deserves thus far, Pejic will likely have rolling starts in his nightmares as yet again he struggled off the front row. With the genuine threat of being absorbed into the midfield, the rookie almost spun out of Turn 1 in desperation to hold position.

Everyone could smell blood in the water and before the end of the first lap, Pejic was bullied off the circuit and facing the wrong way resulting in a disaster for the polesitter.

Meanwhile, Keithley had a blinder of a start, jumping both Lohner and his Williams Esports stablemate. You wouldn’t have guessed it though with no love lost as the Pole tried to wrestle the lead away. His enthusiasm would cost him however as the reigning double champion launched an ambitious move around the outside of Gosser, completing it through the Niki Lauda corner. 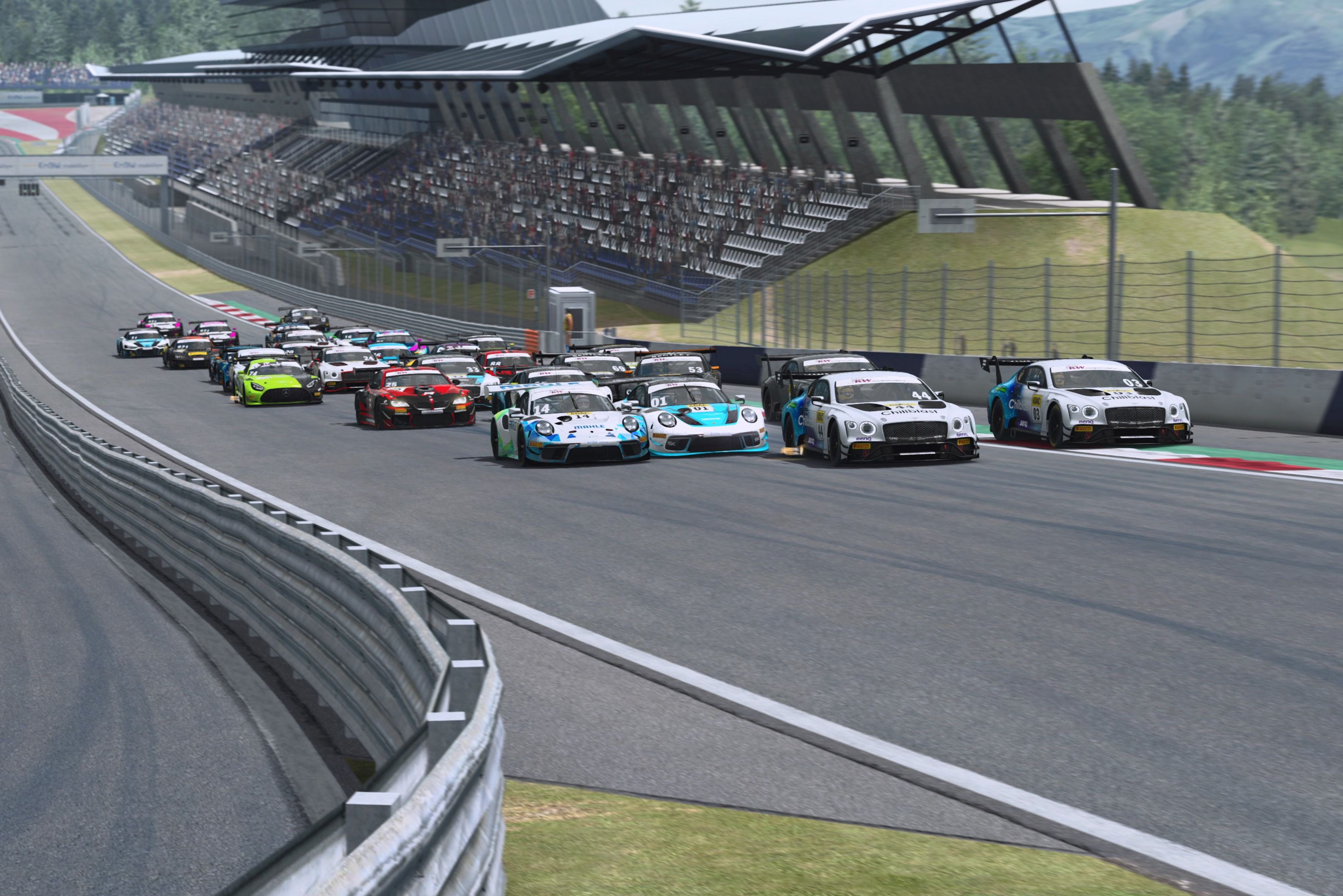 To compound his misery, the stewards deemed that he had been ignoring slow down warnings and thus dumped him with a Sprint race-destroying drivethrough penalty.

With one Williams Esports driver out of the way, only the remaining member stood between Lohner and another victory to add to his collection.

Closely monitoring the contest was another rookie in Jeffrey Rietveld and the MRS duo of Tim Jarschel and Alexander Dornieden. Unfortunately, a rare slip up in the braking zone of Gosser gave all the incentive to those chasing and all three were able to relegate the Dorr Esports driver to fifth.

Keithley wasn’t out of the woods with an obvious pace deficit to everyone behind. Rietveld made a similar mistake to Lohner by attacking too zealously and through went Jarschel into second. After disconnecting from the lead in Oschersleben’s Feature Race, redemption was possible but not to be as the Brit held on to pick up his first win of the year. 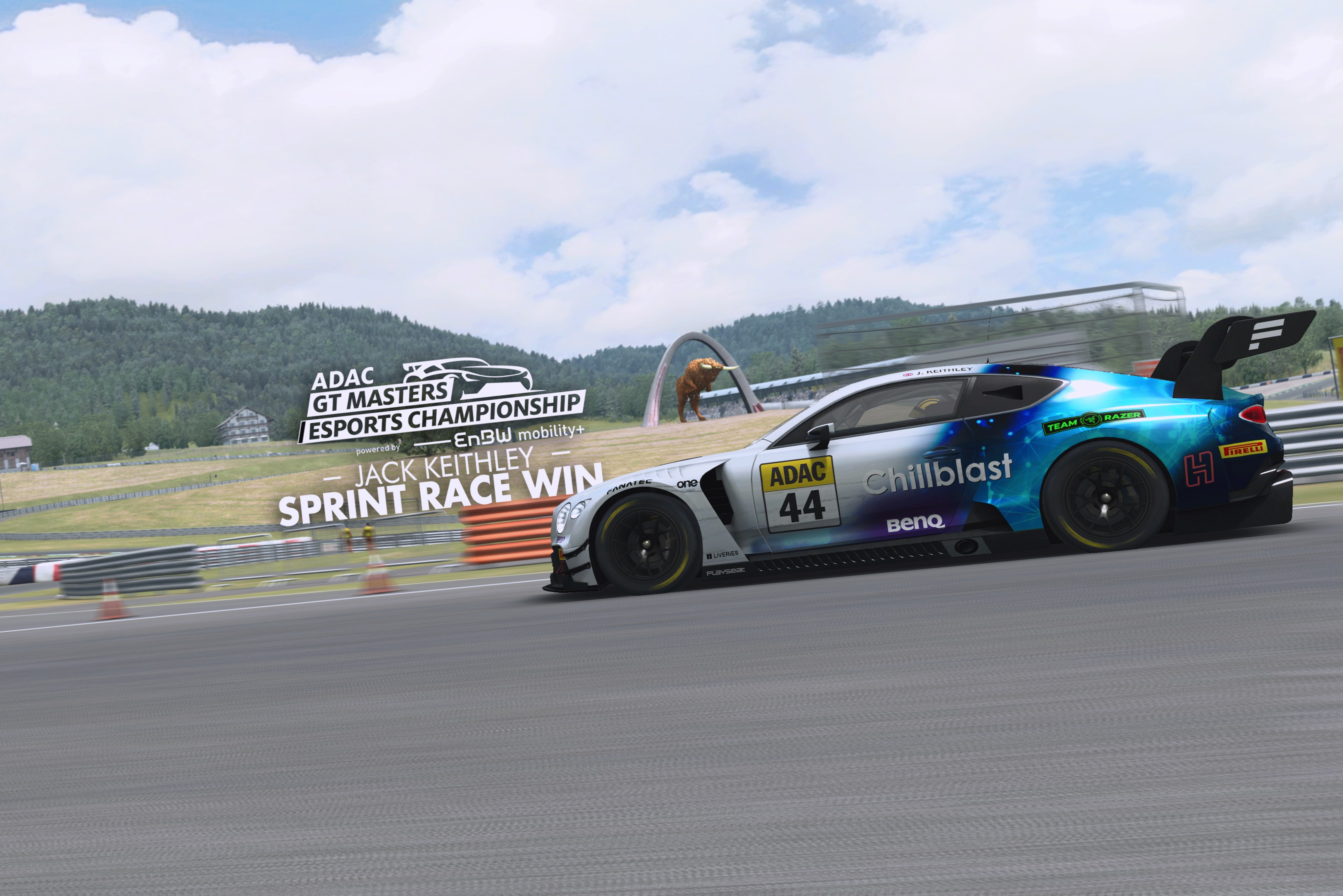 Experienced RaceRoom runner Adam Pinczes would claim pole position ahead of last week’s polesitter Emre Cihan, with Alessandro Ottaviani also featuring at the sharp end. However, Cihan reversed the result by storming to a second win of the season ahead of the company he shared in the top three of Qualifying. 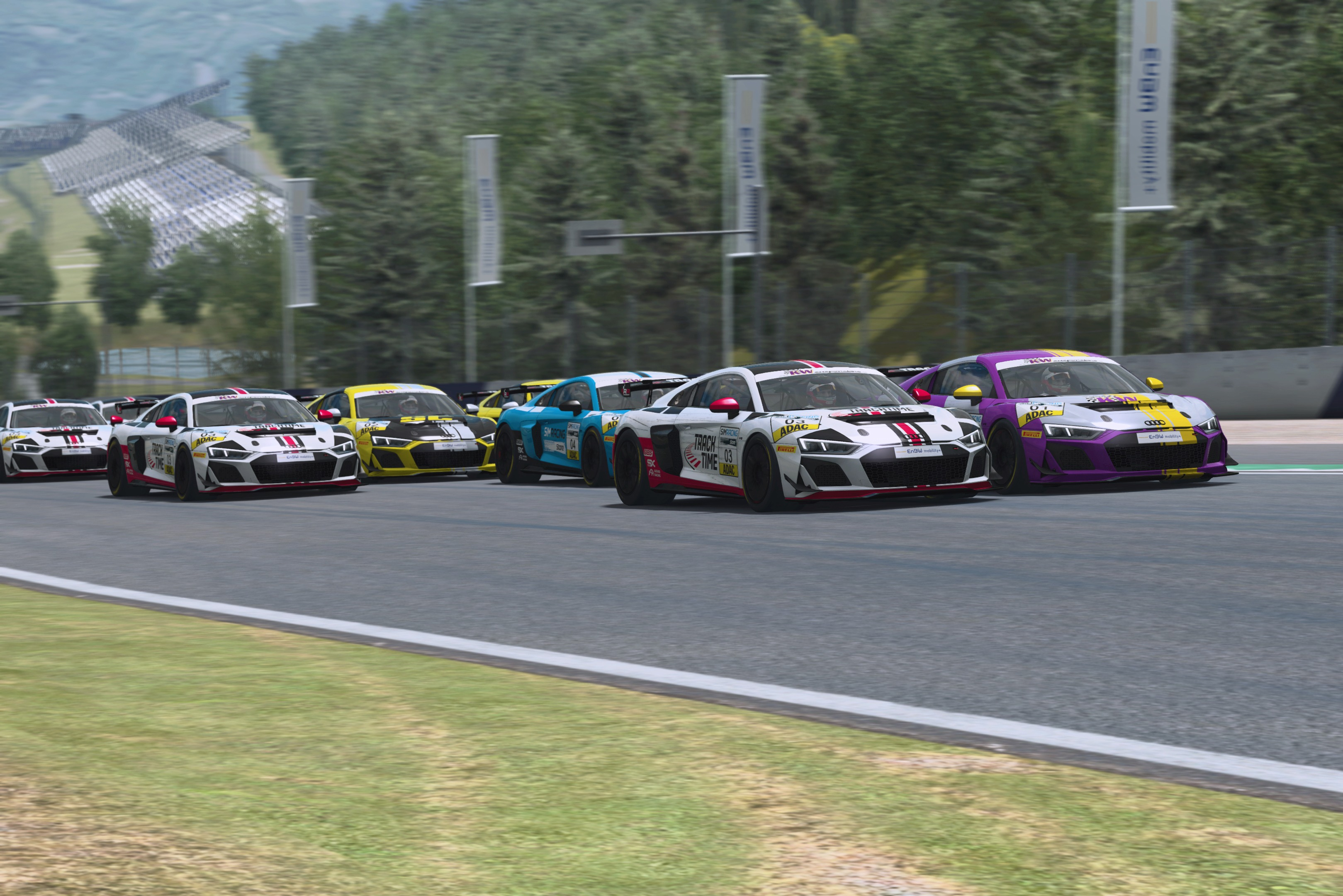 With Marc Gassner on pole, Florian Hasse sat second knowing how his poor start from the same position last week had arguably cost him a shot at a win. At the Red Bull Ring, mistakes were rectified with a solid launch being followed up by a marvellous overtake for the lead around the outside of Turn 1.

Bence Banki was keen to make an early impression on proceedings but, like so many before him, fell afoul of Gosser with his occupancy of third relinquished by Martin Barna. 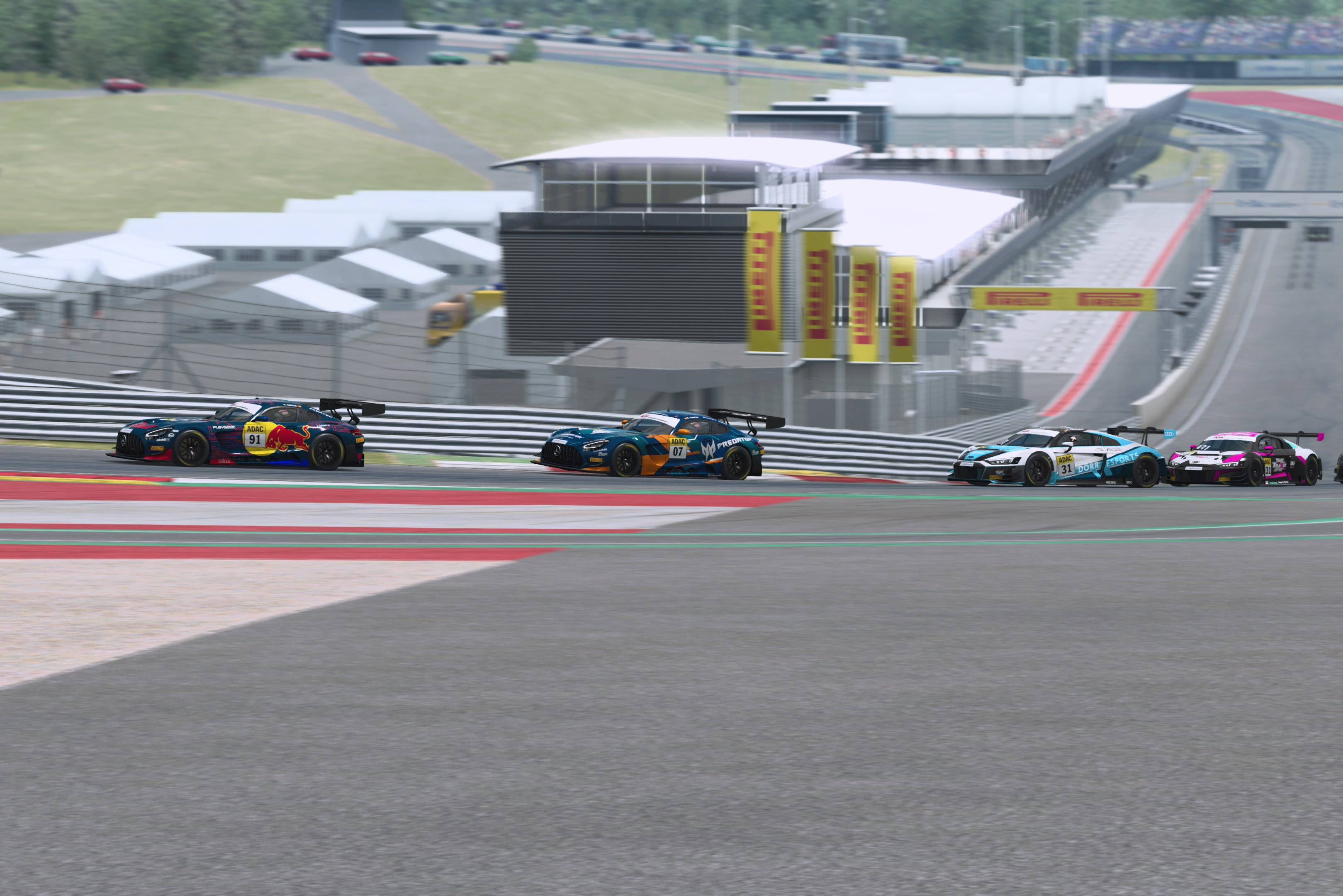 The Slovakian was out of the groove and invited Jakub Brzezinski and Alex Dornieden behind to pressure him. The ensuing battle was mightily fierce, perhaps a little too much for the MRS driver as Lohner then Rietveld picked him off.

Perhaps under the red mist, his aggressive rebuttal was met with a firm door and a half spin. Dornieden fell to 11th though not with further drama as he cut Thibaut Cazaubon’s nose and spun him as well.

As the pitstop window opened, Brzezinski and Jarschel dived in immediately in hopes of an undercut. If Oschersleben was any indicator, this wasn’t as powerful a tactic as in other series. Both Lohner and race leader Hasse responded to the early strategy call and didn’t lose much out of it. Florian had a clear road ahead whilst Moritz returned to the road behind Brzezinski.

The next key figure to box was Banki and finally it appeared that the razor-sharp decision had proven dividends. Both Brzezinski and Lohner forged ahead as the Slovakian emerged from pit exit.

The momentum was all with the wily German operator and once again the third turn of the circuit proved bountiful as a late braking manoeuvre on the Williams Esports Bentley rewarded the reigning double champion handsomely.

Even third-placed Barna wasn’t safe and another Bentley was felled by the charging Porsche. With all major contenders serving their mandatory stop, the order was as such; Hasse, Gassner, Lohner with everyone back to Keithley in 13th still within three seconds of a podium. 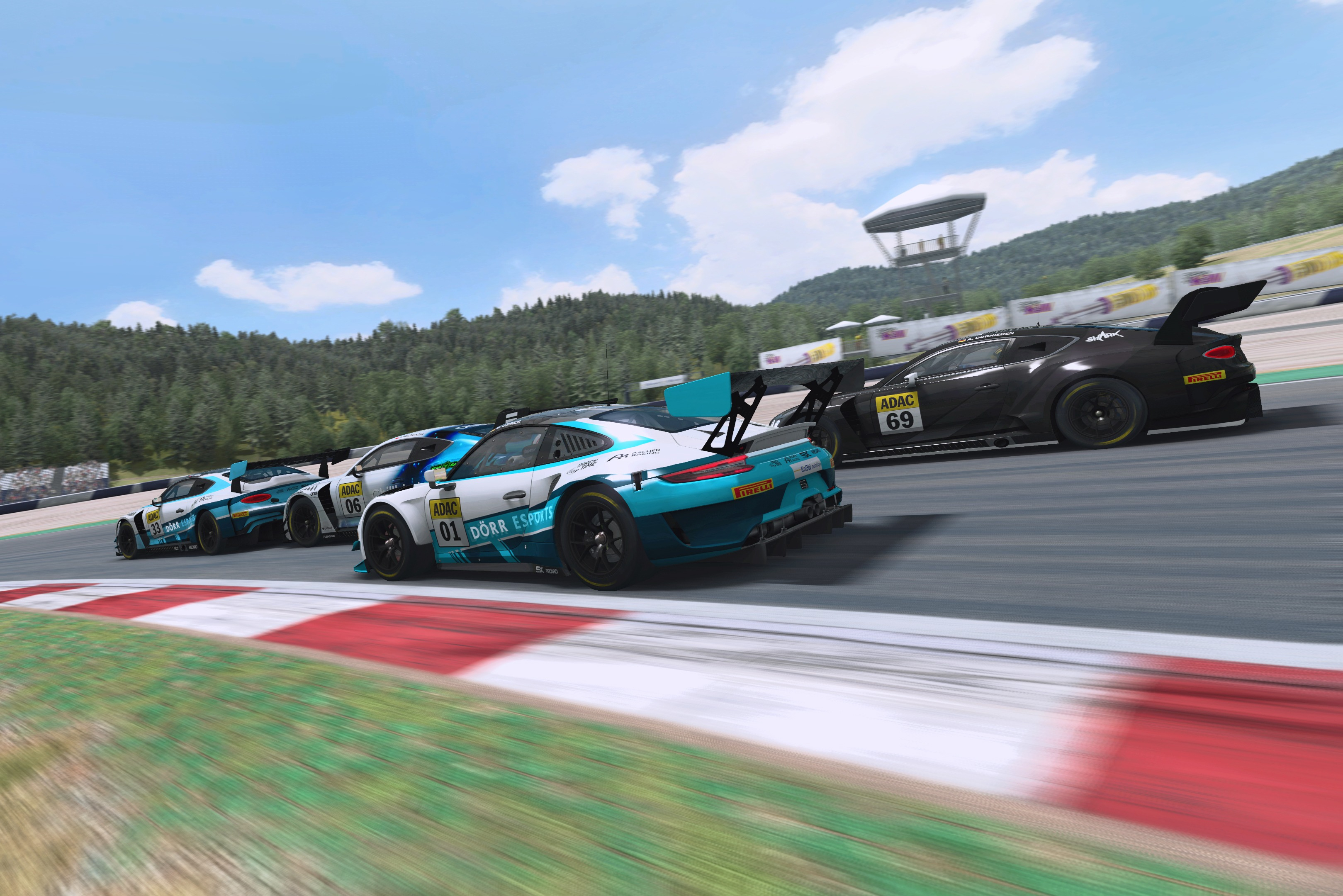 Rietveld and Brzezinski had a fantastic scrap for almost an entire lap with 22 minutes still to run, the Dutchman coming out on top. The Polish driver was set to lose another place just minutes later to Barna.

Eventually, the lead contest was just too spicy to turn away from. Lohner could smell a second win of the season and worked incredibly hard to pass the stubborn Gassner with just shy of 15 minutes left.

During this time, Marko Pejic had been putting in the clean laps with the belief of gaining positions through an undercut. It was a masterstroke for the Sprint polesitter as he fed back out into the massive battle for fifth.

The climax to the Feature saw Rietveld motoring along and vying for a podium. Lohner and Hasse, being team-mates, had been working together to keep Gassner behind and now he was to be fed to a Team Redline branded shark. With a gap now established, the two stablemates went at it for glory.

Hasse held on, just, as did Gassner for the podium. 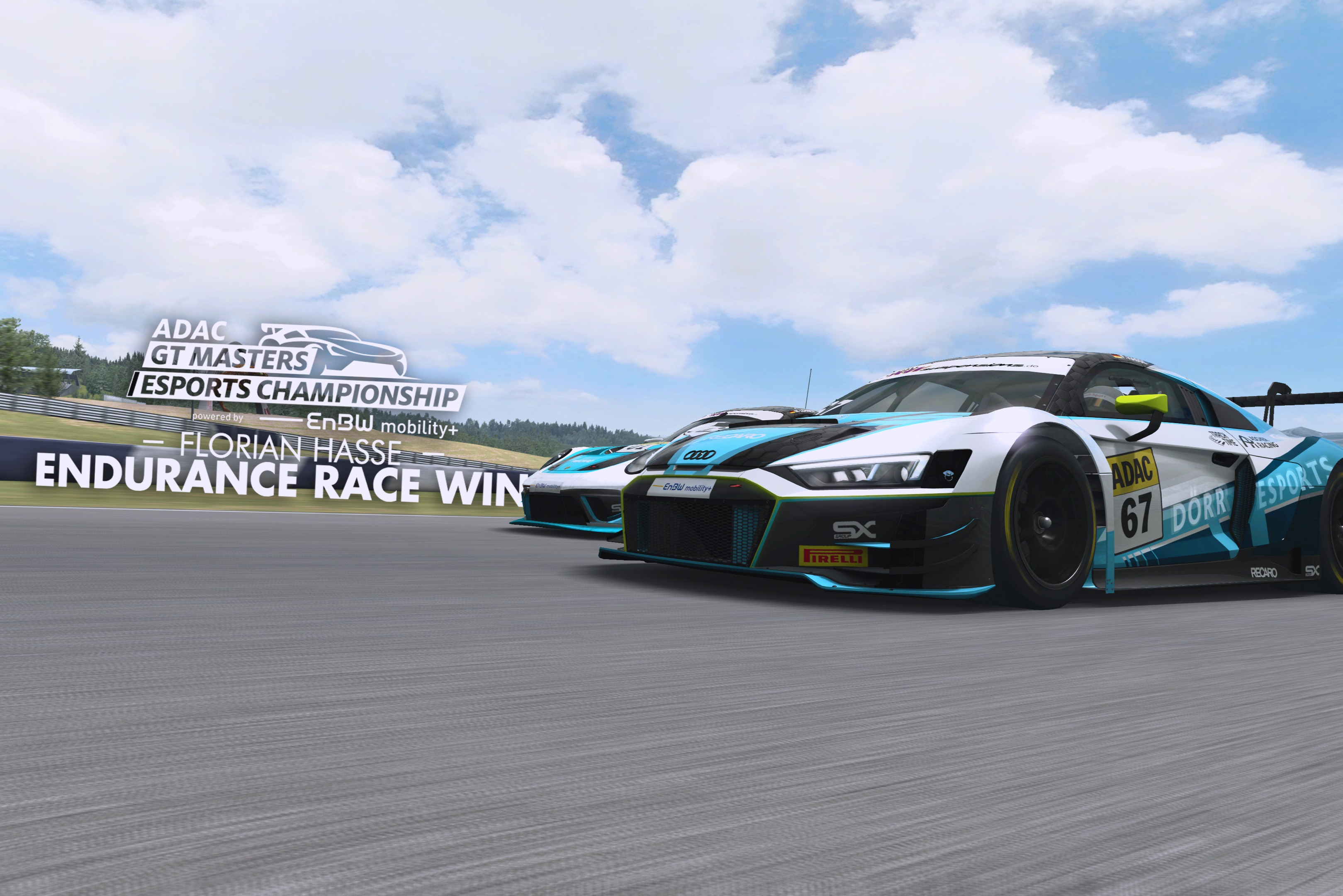 Now there is an extended break before the ADAC GT Masters Esports Championship returns with Zandvoort on the 6th July. The Traxion.GG YouTube channel remains exclusive host to the English commentary stream.