Somewhere on a humdrum industrial estate near Towcester is the beating heart of Motorsport Games’ UK operations. Approximately one-tenth of a derivative grey block belongs an outpost of the gaming publisher – but you’d be hard-pressed to tell.

The unit is hidden down the back of a dead end, with a small company logo placed above an unassuming door. Opposite lives a short-term car rental firm and two doors down is a mechanic working on a Volvo C70 convertible.

Inside, however, is a hive of activity. This is its racing Esports studio.

Created in record time last year – the lease was agreed just three weeks before the beginning of an important event – the intervening 12 months have been used to develop and refine not just the set-up but the production process. 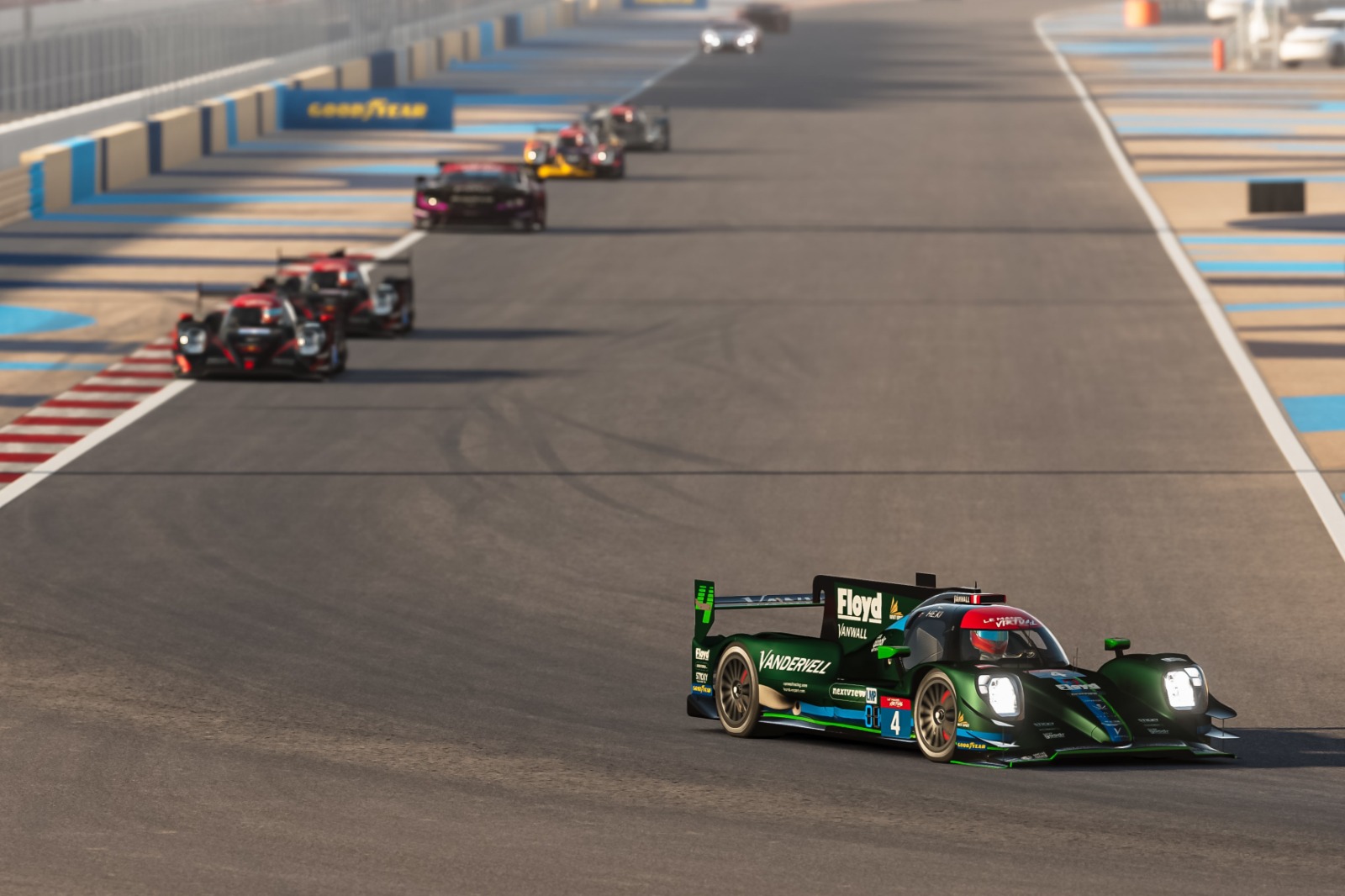 The #4 Floyd Vanwall-Burst won the 8 Hours of Bahrain

“This is a very strong team,” explains the former head of the real-world World Endurance Championship.

“After this opening round, it’s a big satisfaction to see how much the organisation made a big step up for this season, with new graphics, an enhanced understanding of the race and the way they are managing the studio.

“At the same time, the sporting team is always trying to make its best effort to ameliorate because you always have something to upgrade.

“This is really a team spirit, a pleasure."

The first race of the new virtual season is the 8 Hours of Bahrain, the longest of the year, apart from the tent pole 24 Hours of Le Mans Virtual. It's using a track that is not yet publicly available for the rFactor 2 simulation platform.

To make it work has taken a herculean effort from the Studio 397 development team, especially considering the planned mid-event transition from afternoon sun to night-time.

Once the track is ready for use, the teams have entered and tested, it’s over to the video production team to make sure it has the look of a professional motorsport race. 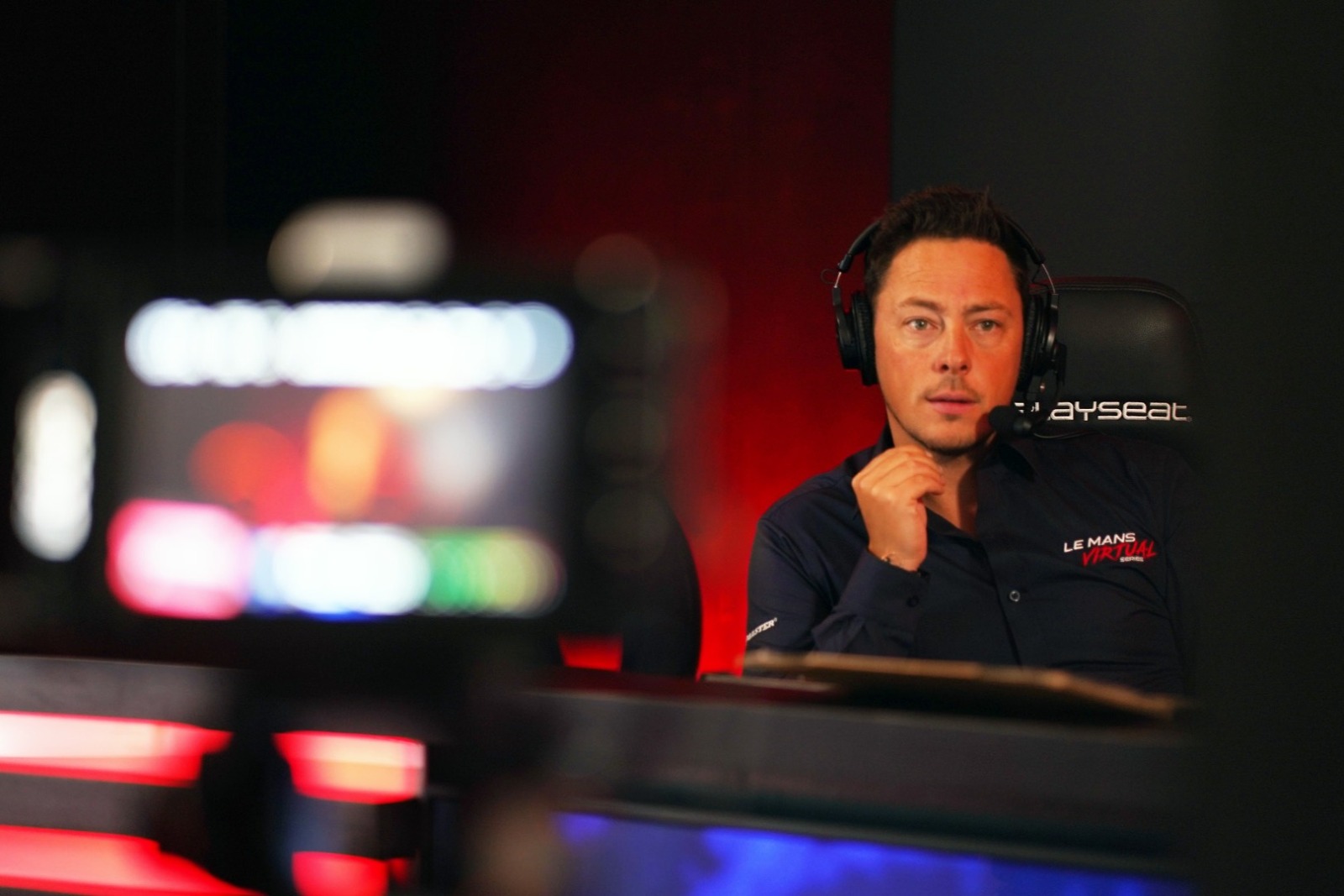 “At first, it was very daunting, because when camera operators want the shot, they want it straight away. So, you must be really on it and keep track of where all the cars are,” highlights Nairi Shirvanian, Esports Event Coordinator.

In the lead-up to the opening round, she has been making sure everything is in place, the run of show is complete, food is on the way and even shirts are ready for the on-screen talent. When the race begins, however, she also plays a crucial video production role.

“With the video feeds, the more practice you get, the more instinctive it becomes. You really start to know how the team works and what kind of shots the directors really like to see before they really ask for it. You're on the same wavelength."

With the circuit being so fresh it’s not yet available, you’d be forgiven for thinking that creates broadcasting headaches. 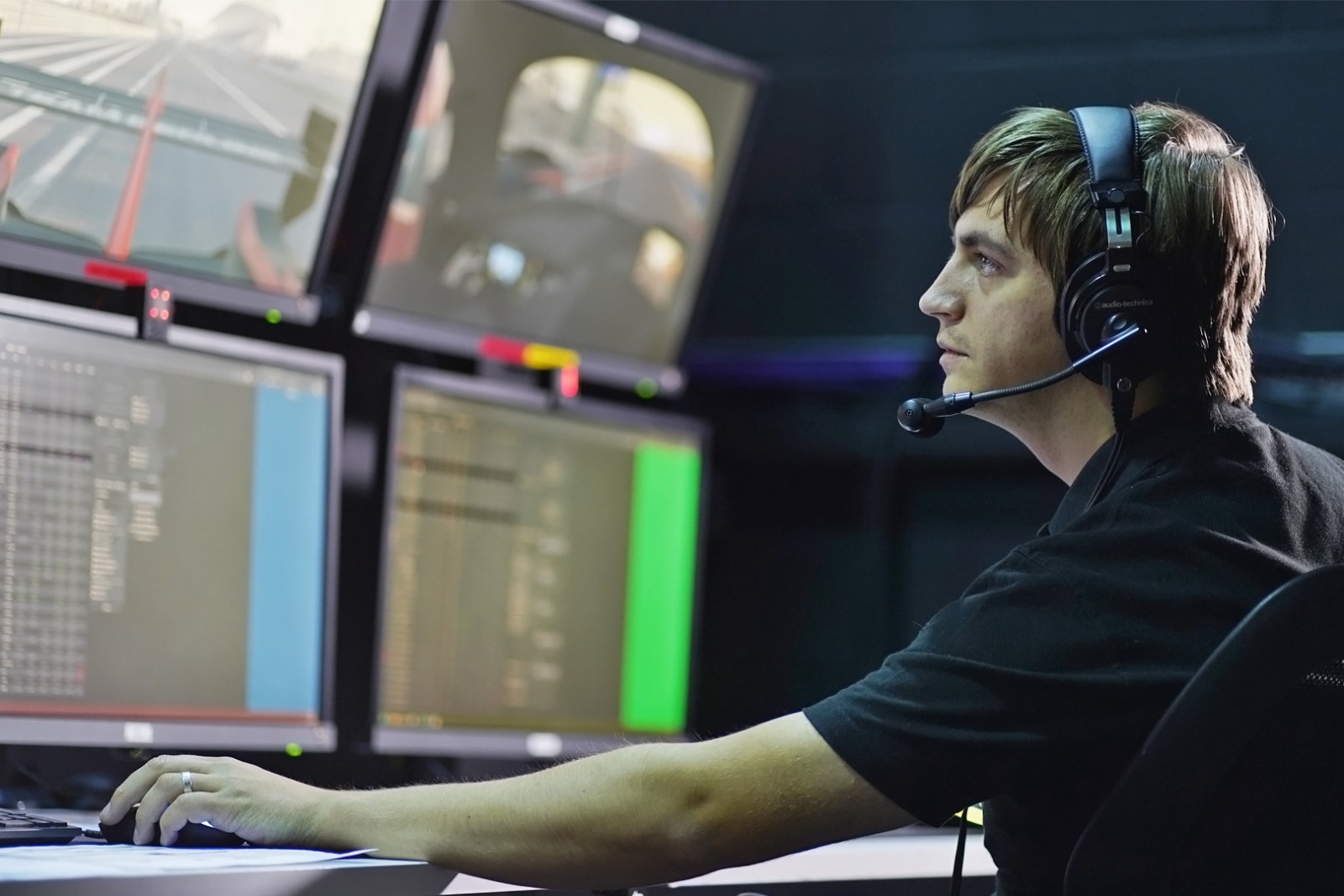 “If anything, [the track being so new] makes it easier because as a team we’ve had input on where the cameras go,” highlights Camera Operator Dan Hyde.

“We can say ‘that camera there doesn't look good’ and then place it somewhere else instead, like inside a curb to get an action shot of the cars passing over it.”

Nairi, Dan and colleague Ryan Wakeman sit downstairs in front of a bank of monitors, communicating with the director and extended production members on the floor above.

It's here where the mission control is located, a room filled with 39 separate displays utilised by the mix team.

Alongside the monitors, there are more brightly coloured buttons than a large bag of Skittles. An intense heat within the modestly sized room creates an intimidating atmosphere. But it’s clear that after a season of working together, this is a slick operation. 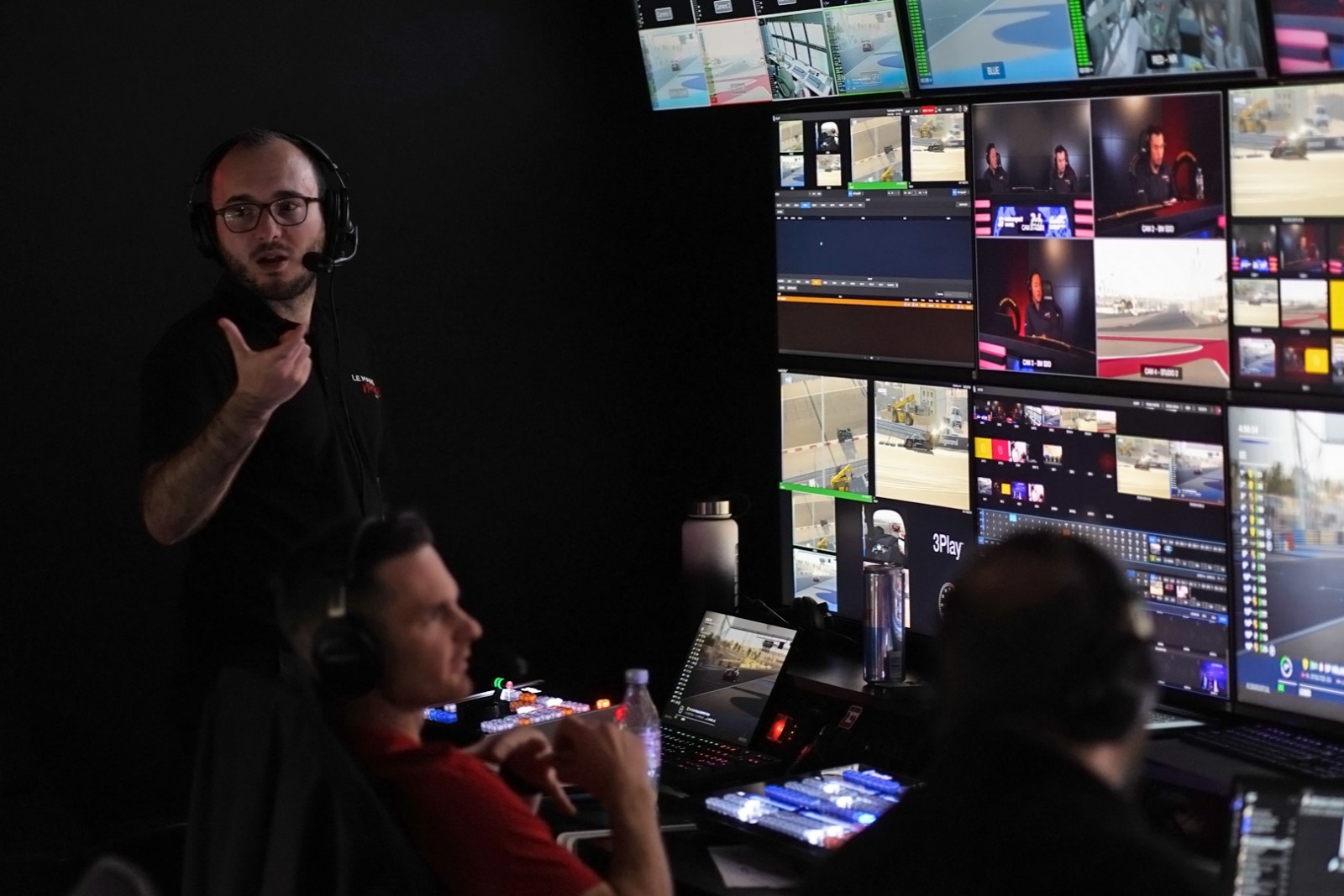 “The primary function of the production gallery is to essentially determine what the viewer sees during the live broadcast,” says Rich Hutson, Replay Operator.

“We mix between multiple different feeds coming from the real-time cameras helmed by Nairi, Dan and Ryan, in-game cameras, pre-recorded assets and graphics that are overlaid.

“We must convey all the information that the viewer may need, be it a shot of the race leader, the current classification or a replay – even down to things like the title sequence.”

Each producer looks at a specific array of screens, with the imposing wall of displays divided up into smaller sections for set team members.

Despite the well-thought-through processes, it still looks rather confusing to an outsider, especially when you consider four separate inputs are managed by each team member. 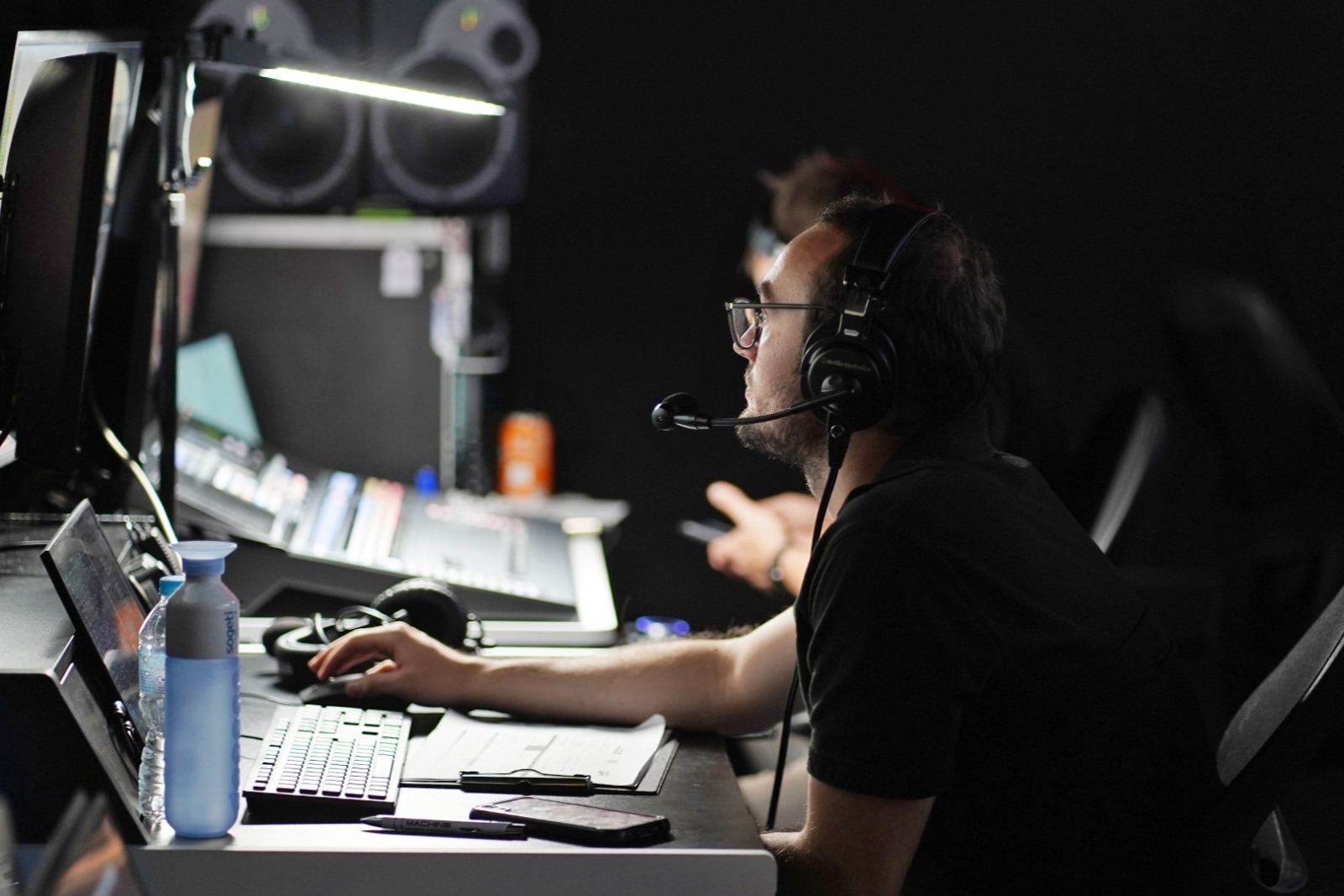 “I also have John Munro, who sits behind me, operating another race camera,” continues Hutson.

“That’s if there's something that maybe we missed, like if the commentators see somebody crashing in the background.

“If the cameras downstairs don’t find it, John can roll back in the game for me, capture it and then we release it as a replay.”

As the race starts, eight hours of frantic decision-making begin for the unassuming team. The action up front is framed by a heated exchange between Floyd Vanwall-Burst and Team Redline.

In the GTE category, several penalties and strategies come into play, making it unclear as to who will be in contention for the class victory. 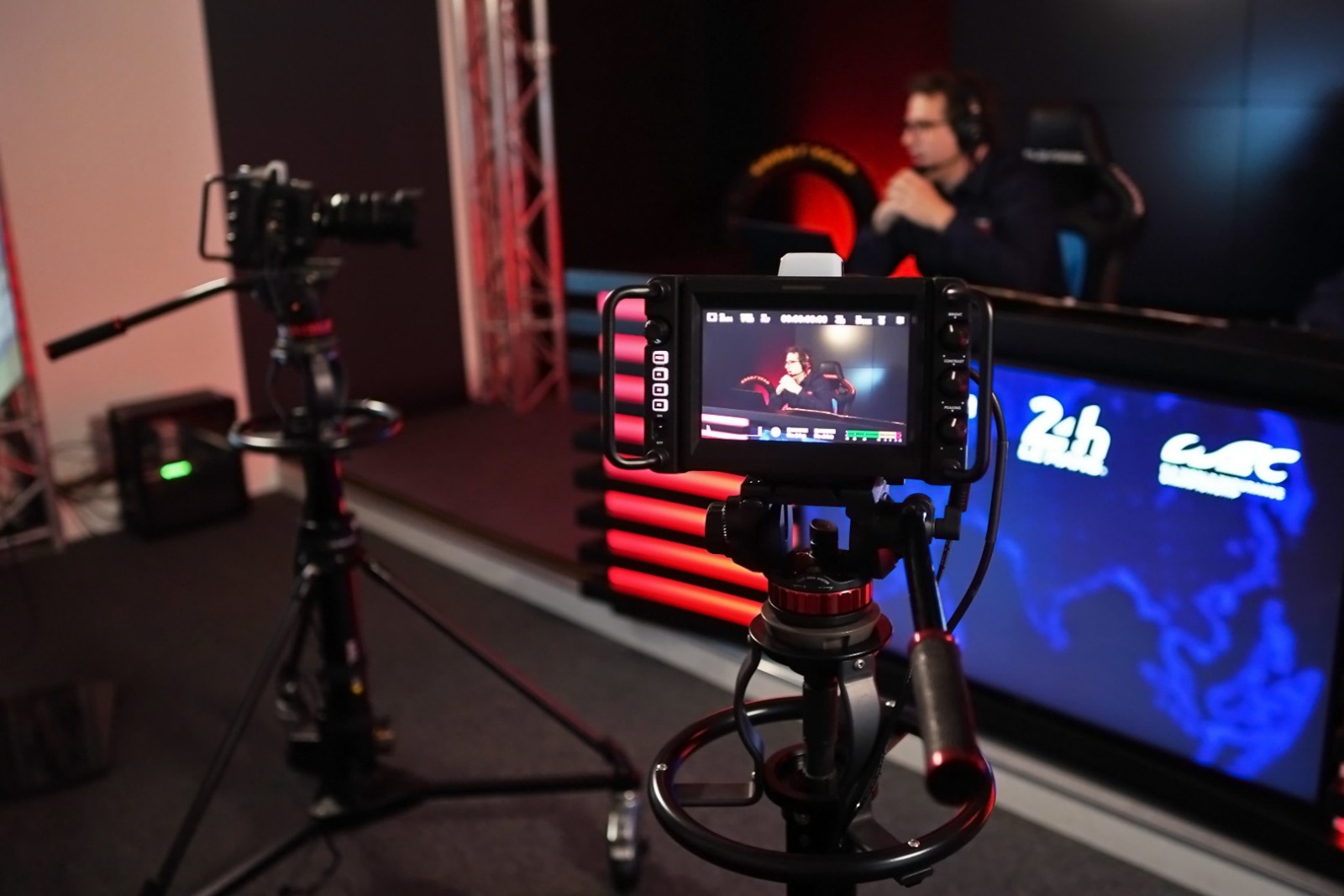 Lewis McGlade commentates on the 8 Hours of Bahrain

The three have a rota for the eight hours. However, simply explaining what’s happening in the moment is only one part of the role.

“I’ve got a massive folder full of prior results just for the series. It weighs something like three kilograms,” enthuses McGlade.

“I think context is everything with a race. For example, we’ve just had a battle in the race between Yuri Kasdorp driving for Oracle Red Bull Racing Esports and the R8G Esports entry. That's his old team, he used to race for them. That's important context.”

Away from the squad working on the live broadcast, however, is a soundproofed cupboard. Its diminutive size has just enough space for a computer, two monitors and a chair. This is home to Oasley Beattie. 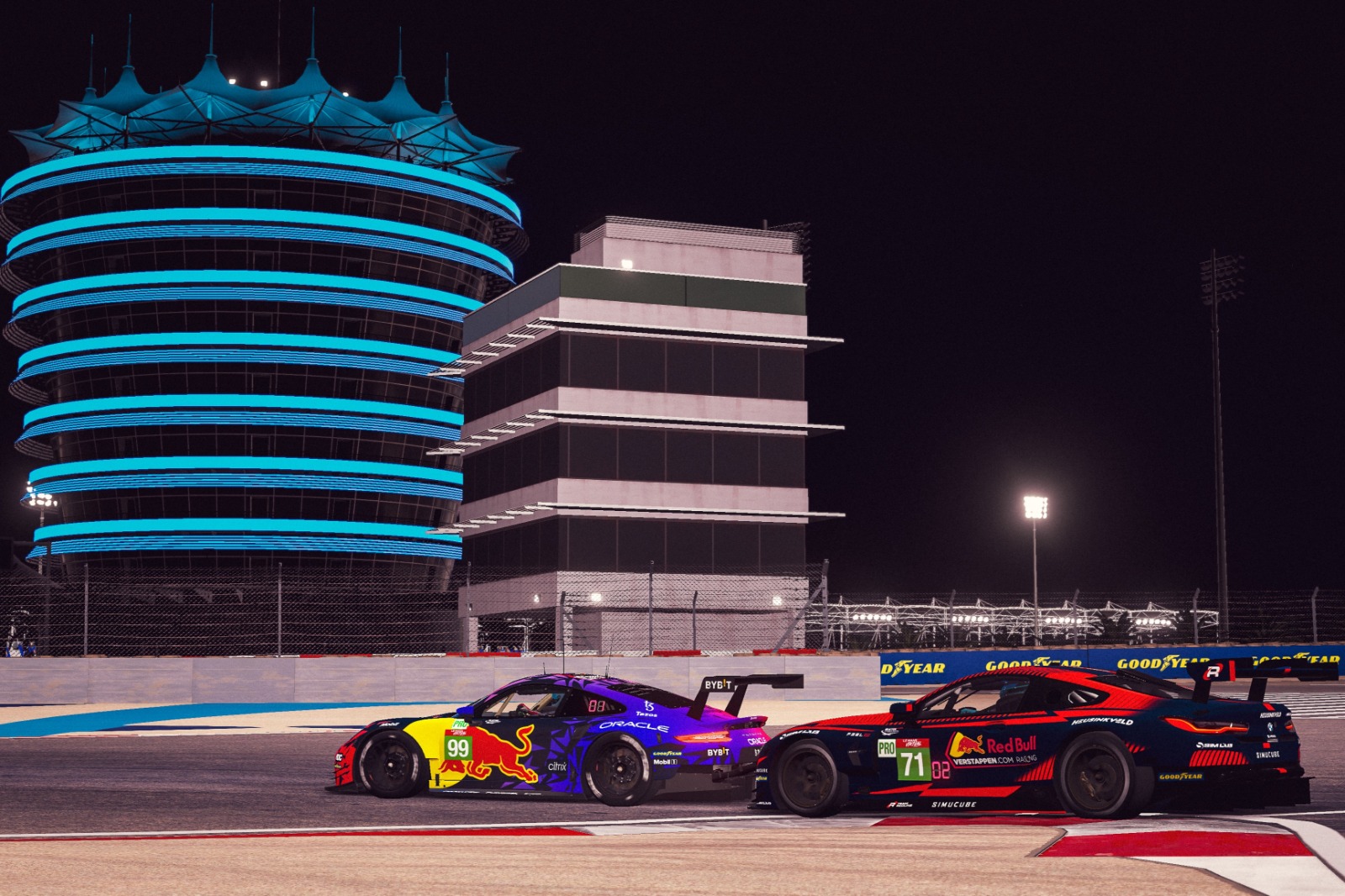 “The audience wants to see highlights immediately after the race has finished,” explains Beattie with two hours still on the clock.

"An hour after the race finish is the crunch time for me, but I also edit the hourly highlights during the race for the social media team to share in the immediacy.

“I have four SD cards, and I visit the gallery upstairs each hour to collect footage. I receive dirty and clean footage, which is with and without commentary. I can then mix all the best bits together.”

The broadcast completes without a hitch, thanks in part to Head of Esports and Events Lewis Edmondson frantically trying to placate team managers peppering him with requests. I’m convinced at one point I saw sparks emanate from his keyboard...

Following this opening round, three more take place ahead of the series’ finale – the 24 Hours of Le Mans Virtual – which is held on the 14-15 January 2023. 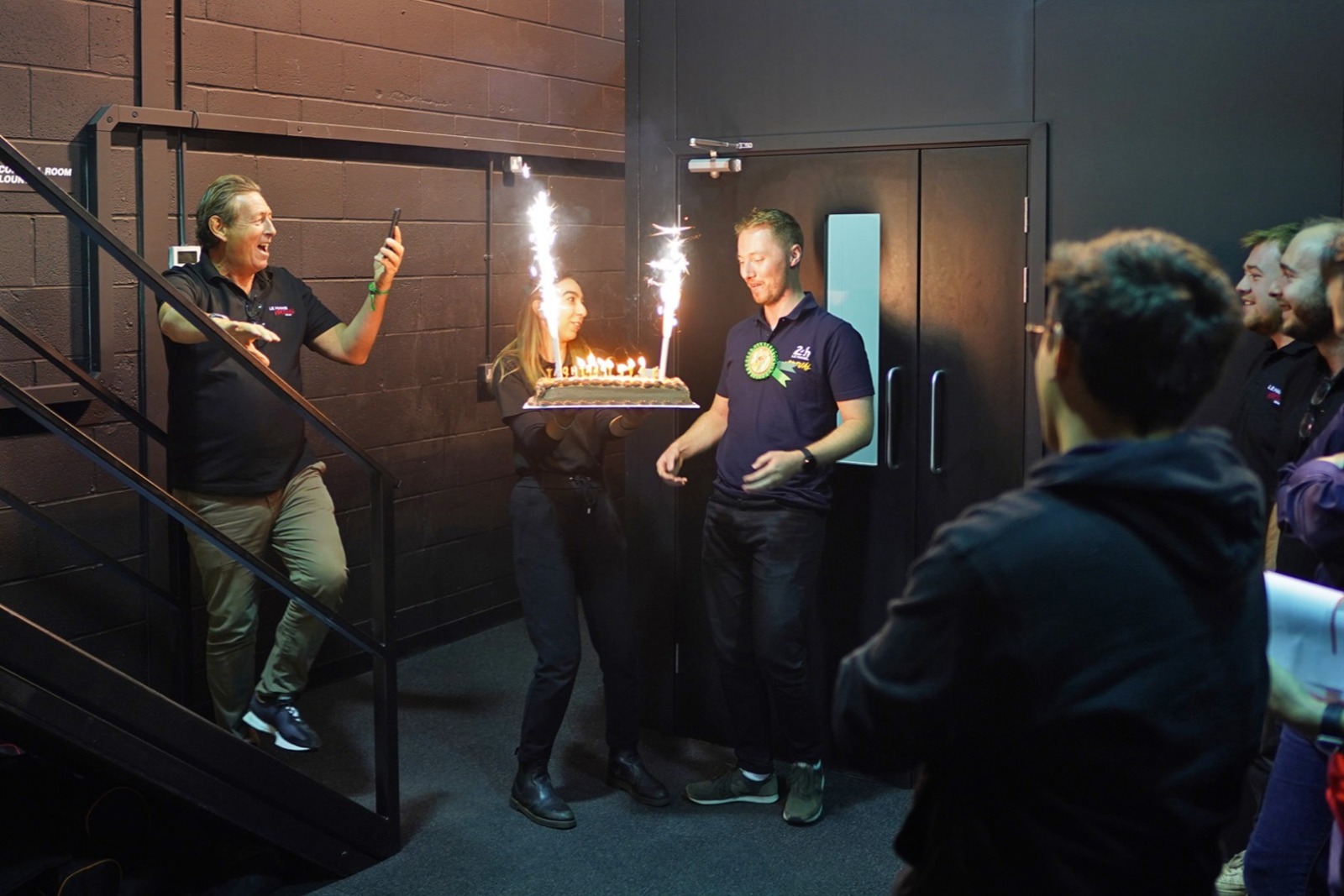 “To be honest with you, we are looking seriously to do some surprises for next year,” teases Neveu excitedly.

“You cannot duplicate every year, that’s the advantage of being virtual. We can be creative, innovative.

“Based on the technology we're using today, we're starting to work with Darren Kirk, who is the head of the technical staff, with Ben Rossiter-Turner and with Lewis [Edmondson] to discuss some ideas.

“I would like to make sure that we can share with the fans and the followers what's happening on the competitor’s side, so we must find a way to do it. We are trying to provide very exciting entertainment for the big one in January.”