As the sun set on the first Le Mans Virtual Series race of the 2022-23 season, Floyd Vanwall-Burst and Oracle Red Bull Racing have won the 8 Hours of Bahrain.

Following a closely-packed qualifying session the day before, the pre-eminent Team Redline sat in pole position in both classes, with Jeffrey Rietveld and Kevin Siggy setting the best times in LMP and GTE.

The reigning champions locking out the front rows didn’t tell the whole story though, as the GTE field, in particular, was extraordinarily tight. 15 out of the 16 entries were covered by less than a second.

With the bright Bahraini sun beating down on the virtual asphalt as the clock hit 2 pm CEST, the 40-car field raced down to Turn 1 to begin a punishing race.

Initially, pole-sitter Rietveld was tentative, allowing Jernej Simončič for Floyd Vanwall-Burst to momentarily nose ahead before the Redline driver braked late to hold on.

In GTE, progress was more frenetic, as Red Bull Racing driver Yuri Kasdorp jumped from sixth on the grid to second. Challenging for the lead during the opening lap, Enzo Bonito resisted the charge by defending heavily into Turn 4 in his Redline BMW.

However, the Italian driver would come unstuck in the early stages, running across the agreed track limits entering Turn 11 twice, earning a drivethrough penalty. 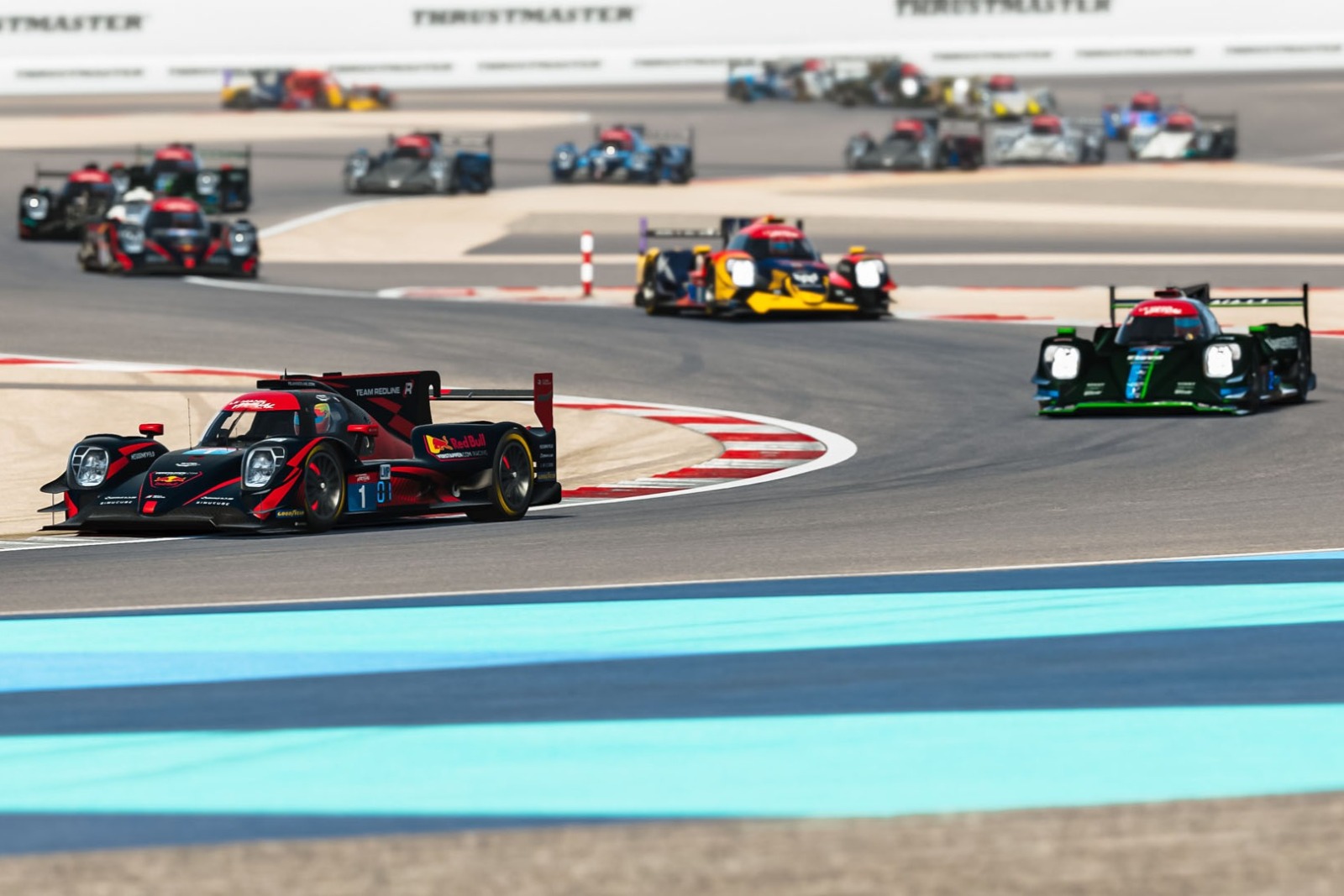 Redline vs Floyd Vanwall-Burst, this battle framed the race

He wasn’t the only one, as former Formula Pro Series champion Bono Huis used the same line, warned against in the driver’s briefing, receiving not one but two drivethrough penalties, two of four reprimands.

It was amidst a frustrating race for the #63 AMG Team Petronas, which would later disconnect from the race, along with the #10 and #53 entries.

“As an organisation, there is no evidence to see that the disconnects of these cars were related to the race server and lobby host,” read a Le Mans Virtual Series statement.

A maximum of three laps was given back to the teams, but the #63 chose not to retake a position on track. Meanwhile, the #53 AMG Team Williams ultimately finished seventh, picking up valuable championship points. 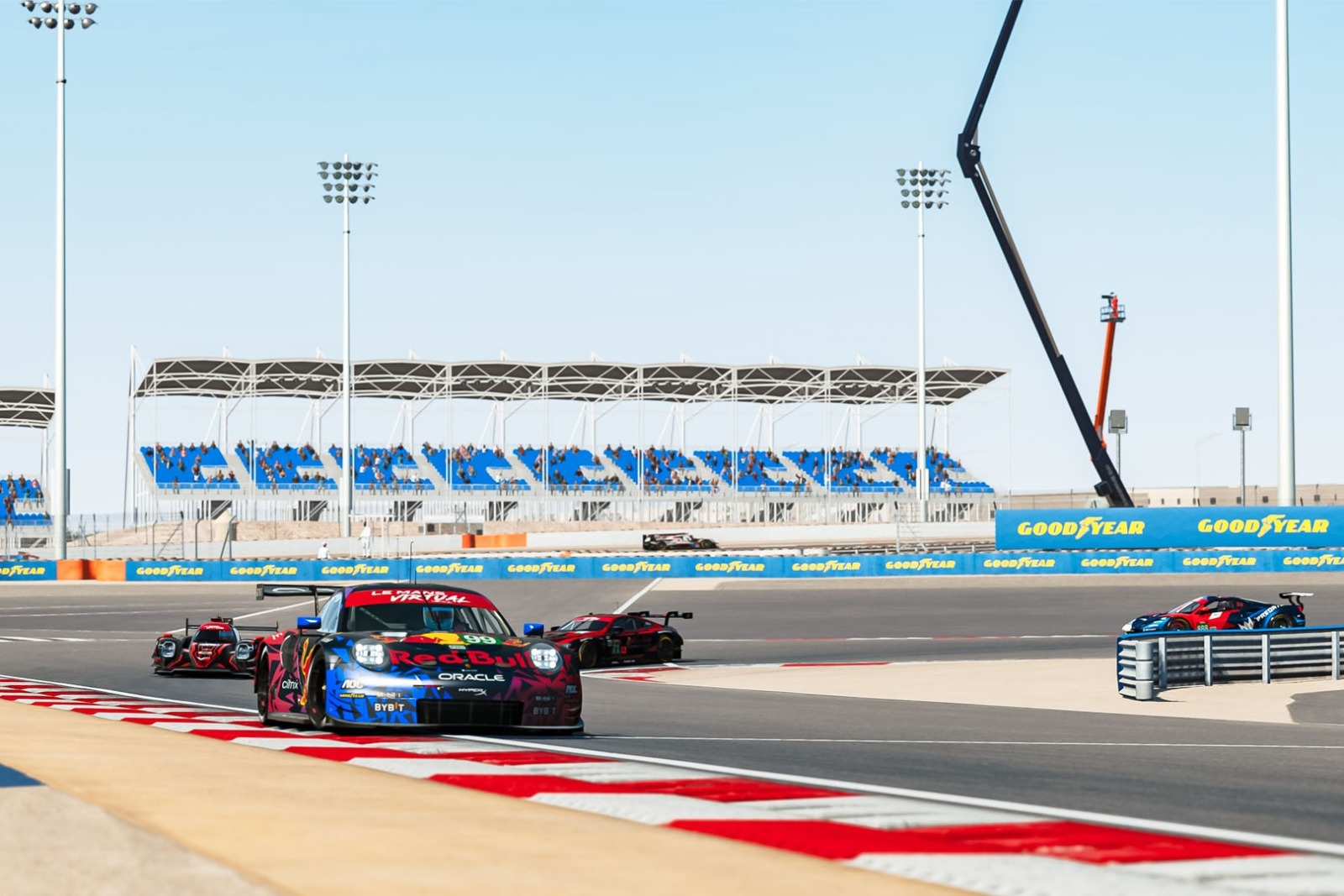 Perhaps more pertinently, Kasdorp made it into the lead of GTE within the first hour, where the Porsche traded positions with championship debutants Project 1 by Dörr Esports, at this stage driven by DTM Trophy podium finisher Moritz Löhner.

The two 911s were back and forth throughout the first four hours, before the German upstart’s luck ran out due to an unfortunate PC hardware issue for Leonard Krippner which forced an early pitstop.

However, the R8G Esports Ferrari – helmed by Formula 3 race winner Alexander Smolyar during the opening hours and in qualifying – chipped away and with two hours left had carved out a lead. It all came to nothing though, with a technical hiccup forcing a retirement.

While the GTE battle was a strategic struggle, upfront for the overall race win, it was an out-and-out duel between two teams: Redline and Floyd Vanwall-Burst.

Several times the #1 and #4 duked it out for position on track and via strategic plays. In the latter stages, the #1 looked to have fuel saved aggressively through the event, but with just over an hour left and the strategies equalled out, Simončič exited the pitlane as Luke Bennett entered Turn 1. They made light contact, but both remained on track, the #4 now in the lead. 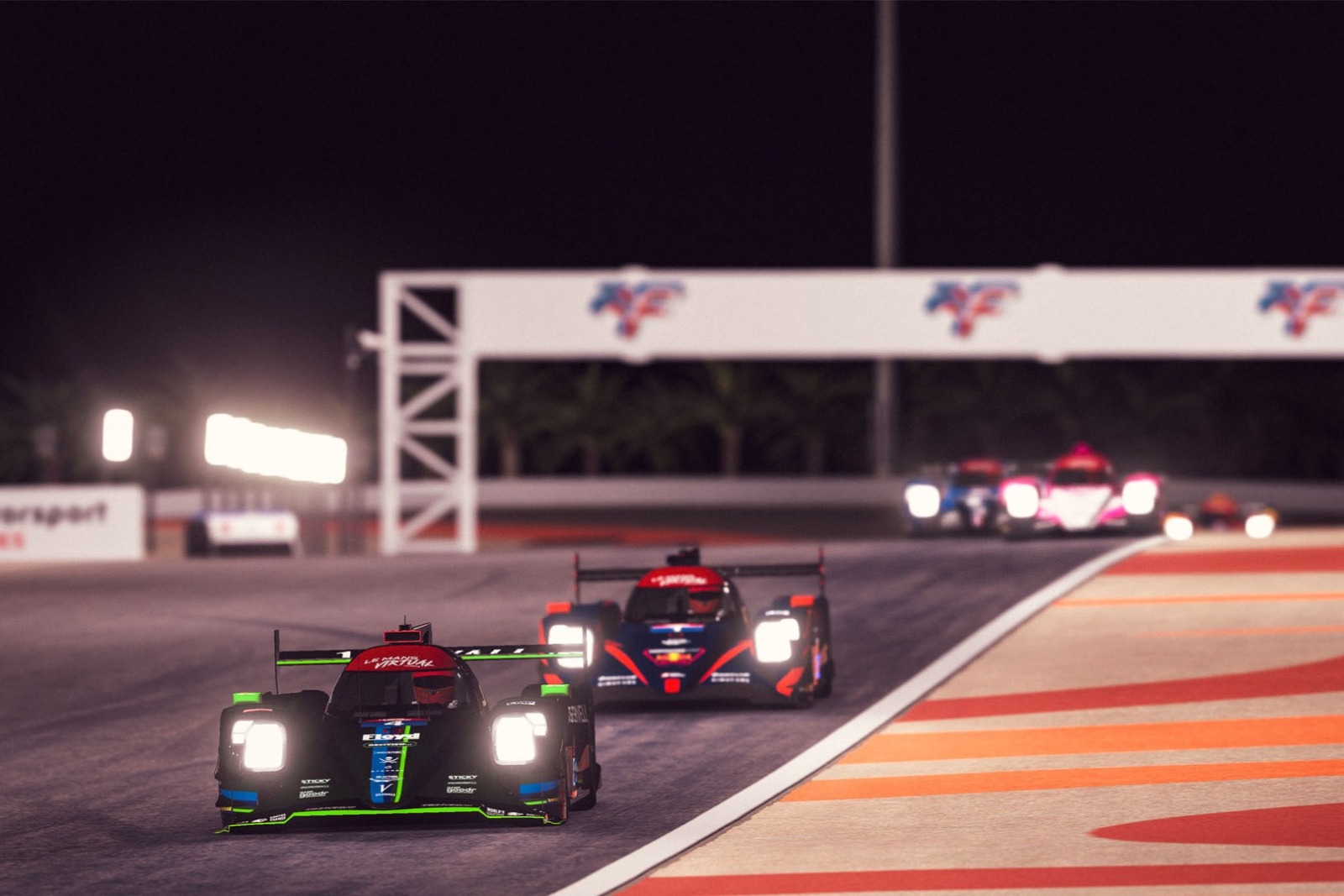 The battle for the lead was close throughout the eight hours

A few laps later, Bennett ran wide, allowing Erhan Jajovski driving for Romain Grosjean’s eponymous R8G Esports squad to close in. As they both pitted for the final time, the R8G machine leapfrogged the Redline entry.

With 30 minutes left, Floyd Vanwall-Burst led, ahead of R8G and Redline.

Things heated up in GTE too as the sun set and darkness washed over the circuit. Despite the earlier penalty, the reigning champion BMW Team Redline #71 was back in contention thanks to an inspired drive by Siggy.

He found himself in the pits at the same time as the leading Red Bull with Dennis Jordan behind the wheel. 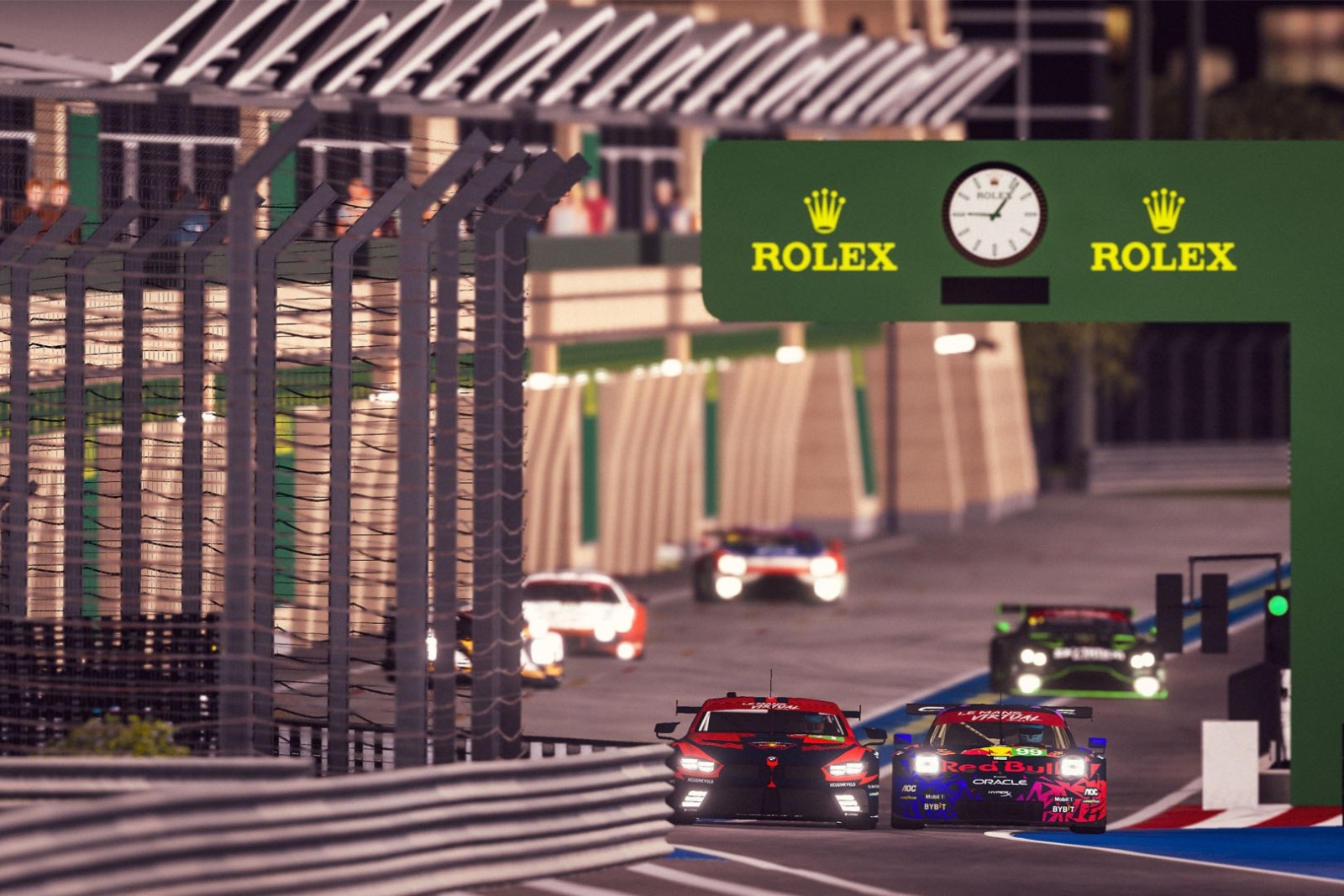 As the BMW left its pitbox, the M8 was ahead but the Porsche had a slight overlap. They ran alongside each other down the pitlane exit, with Siggy receiving the car’s second drivethrough for pushing the Red Bull car across the white line.

The Bavarian model was still in contention for a podium finish however and picked up third when a hapless Patrick Schindler driving for SIMMSA Esports was punted around by a rogue GR Vector Esport LMP.

In LMP, the #4 extended its lead as Jajovski and Bennett scrapped intensely, with the latter making several attempts at an overtake resulting in contact, but mercifully, no lasting damage.

It all came to a head when Bennett dived down the inside at Turn 4 from several car lengths back in a desperate move. He had the position, but only fleetingly, dropping behind in fear of a penalty. 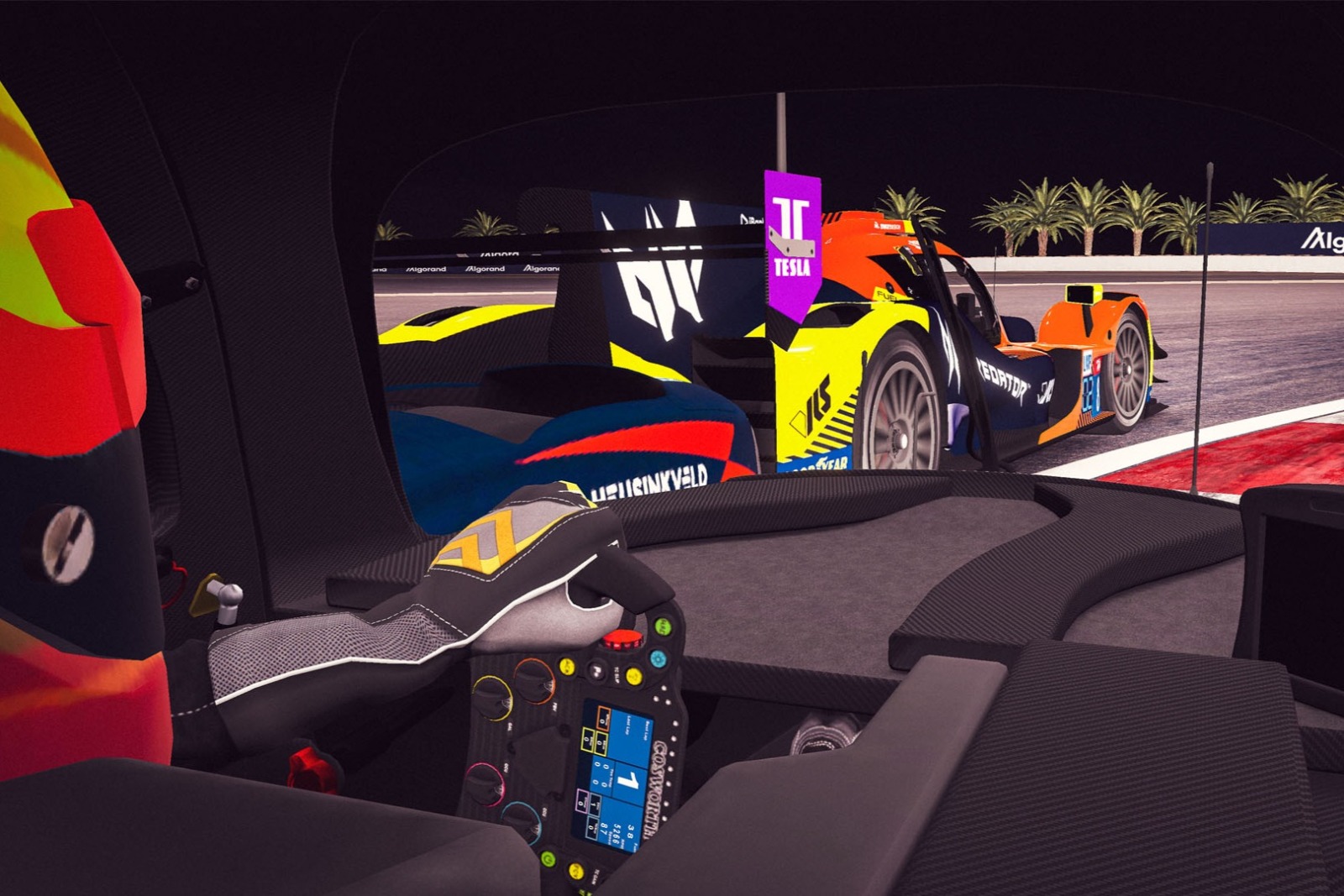 Ahead, the #4 Floyd Vanwall-Burst driven by Simončič, Jesper Pedersen and Damian Skowron had won a dramatic race.

“When I joined the server I was on soft tyres and everyone else was on mediums and I was panicking,” explained an elated Simončič.

“It turned out to be the better strategy. We were so confused by the Redline approach, but we knew we needed to just keep going with our plan and fortunately I had the pace to catch and overtake for the lead.” 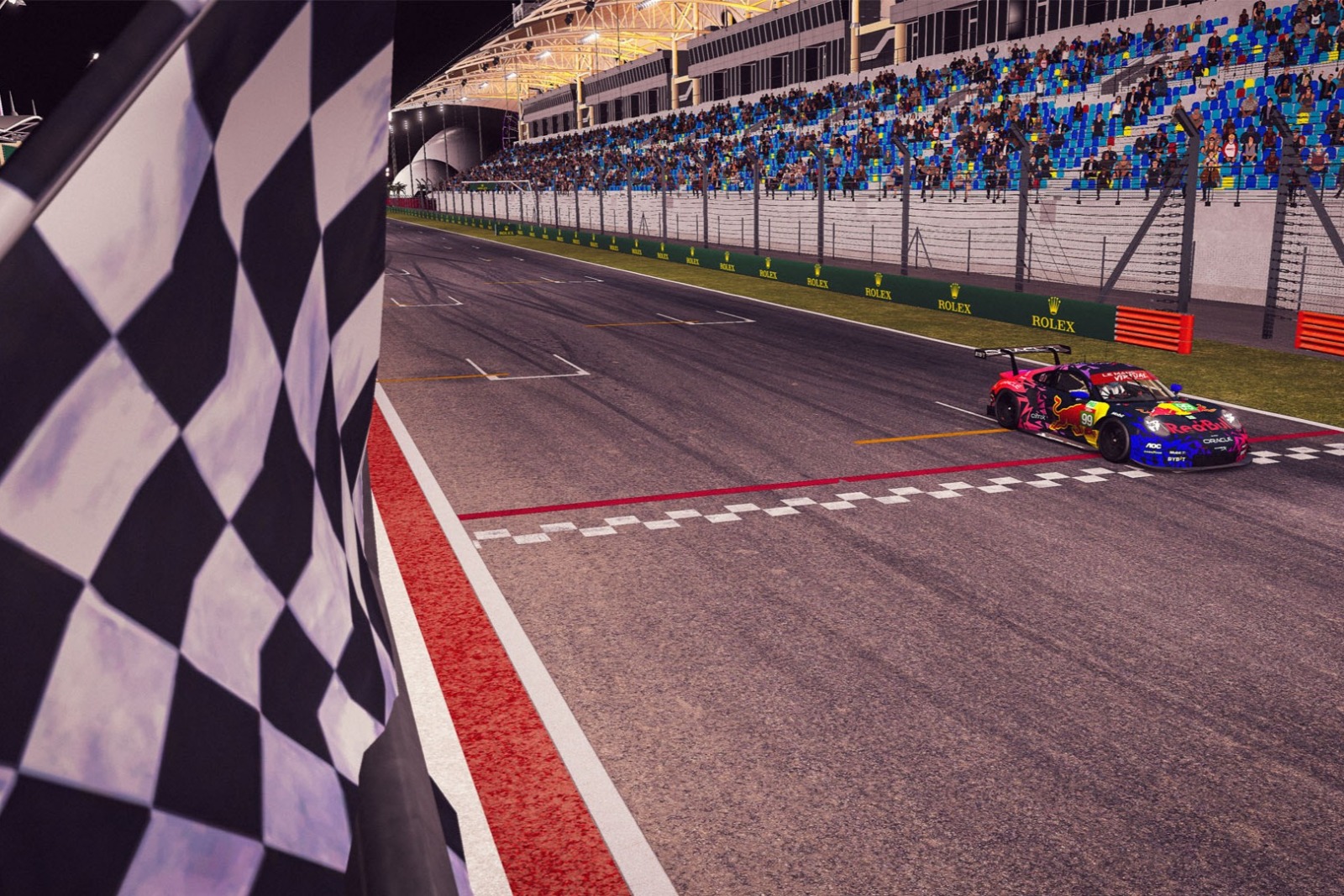 Red Bull Racing had also managed to pull off the GTE win, thanks to Kasdorp, Dennis Jordan and Cooper Webster.

“Yuri was on fire, I’ve never seen anything like this,” said Jordan.

“We’re delighted to win, but we still need to keep pushing for the next race.”

The next round of the Le Mans Virtual on 8th October 2022 for the 4 Hours of Monza.