The Skoda driver gained an early advantage by winning Friday evening's superspecial event around the streets of the host city Zlin before stretching his overnight lead with a faultless run through all of Saturday's stages.

The gap to the chasing group was 37.5 seconds as the final day of competition got underway when his undefeated streak came to an end after he adopted a cautious approach through the morning stages - which were blighted by muddy corners following an overnight downpour.

He continued in this tentative manner through the afternoon to win the event by 1m01.6s despite not winning a stage on the final day.

Fellow countryman Vaclav Pech claimed second place in his Mini. The current Czech Championship leader was rewarded for his consistency and ability to remain out of harm's way.

Behind him for the majority of the rally was Roman Kresta, who had enjoyed a relatively comfortable ride in the final podium position in his self-run Skoda before suffering a puncture through the first pass of Jankovice on Sunday morning.

The three minutes he lost dropped him down to fifth overall and promoted team-mate Jarmoir Tarabus - who also encountered a puncture on the same stage - up into third position.

Tarabus had threatened to enter the top three early on in the event, but was handed a one-minute penalty for entering service ahead of schedule before the start of the sixth stage.

He eventually clawed his way back up the order with a succession of quick times through Saturday afternoon's stages and finished the day in fourth after displacing Skoda works driver Sepp Wiegand on day's final test through Pindula. 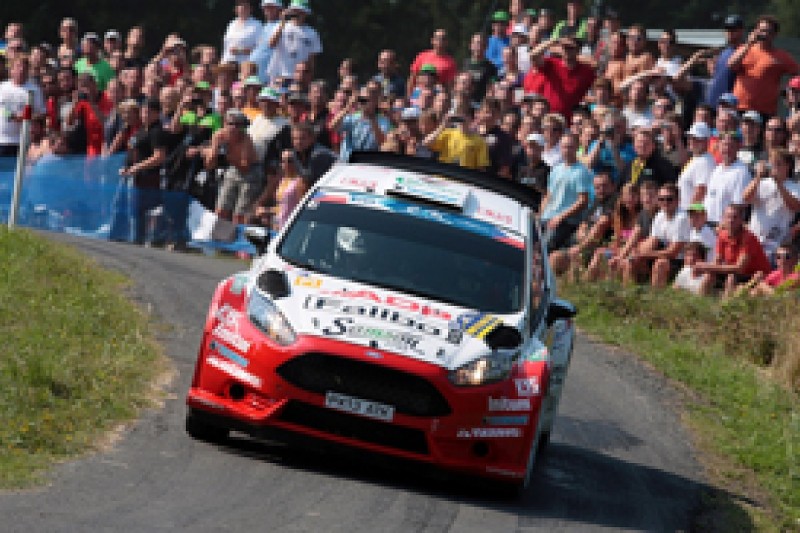 The pair were initially embroiled in a battle for third during the opening loop of stages on Sunday, but Tarabus found form in the final trio of tests and pulled away from his German rival by finishing 31.6s ahead of him.

The event also marked the competitive debut of the Ford Fiesta R5 in the ERC, but hopes for local hero Tomas Kostka to reach the podium once again came to a halt on the first pass through Pindula on Saturday when he suffered a broken differential that led to his retirement.

Fellow R5 runner Pavel Vaolusek fared better and underlined the new-generation car's pace by making series history with a stage win on the first run through Jankovice on the final day.