With the hectic launch season over and done with and the new Formula 1 season now well under way, suppliers up and down the country are breathing deep sighs of relief. At the Aero Tec Laboratories (ATL) warehouse in Bletchley, it is almost palpable.

Founded in 1970 by American hobby racer Peter Regna, ATL supplies every team on the grid with safety fuel cells, which makes the run from October to April its busiest period of the year. With each hand-made bladder taking up to 150 man hours to assemble, and some F1 teams going through dozens of iterations before settling on a final design - which could well change again during the season - it's a long and arduous process.

And that's even before its commissions for the entire World Rally Championship and British Touring Car Championship fields, plus projects in the automotive, aviation, military, marine and industrial sectors are taken into consideration.

Starting out in lightweight, crash-proof fuel bladders based on the flexible composites developed by Regna, ATL safety fuel cells were first used in F1 in 1978 and had been adopted by every team 10 years later, when ATL first set up shop in the UK.

But not content to stop there, it has added the capability of producing the complete fuel system 'black box' in-house, including all the internal pumps and collectors, to service a broad church comprising OEMs and club racers in the Citroen 2CV Challenge alike.

With design and fabrication facilities backed up by specialist quality control areas, ATL also recertifies its fuel cells that have reached their five-year expiry date and conducts reverse-engineering projects for historic vehicles and planes. 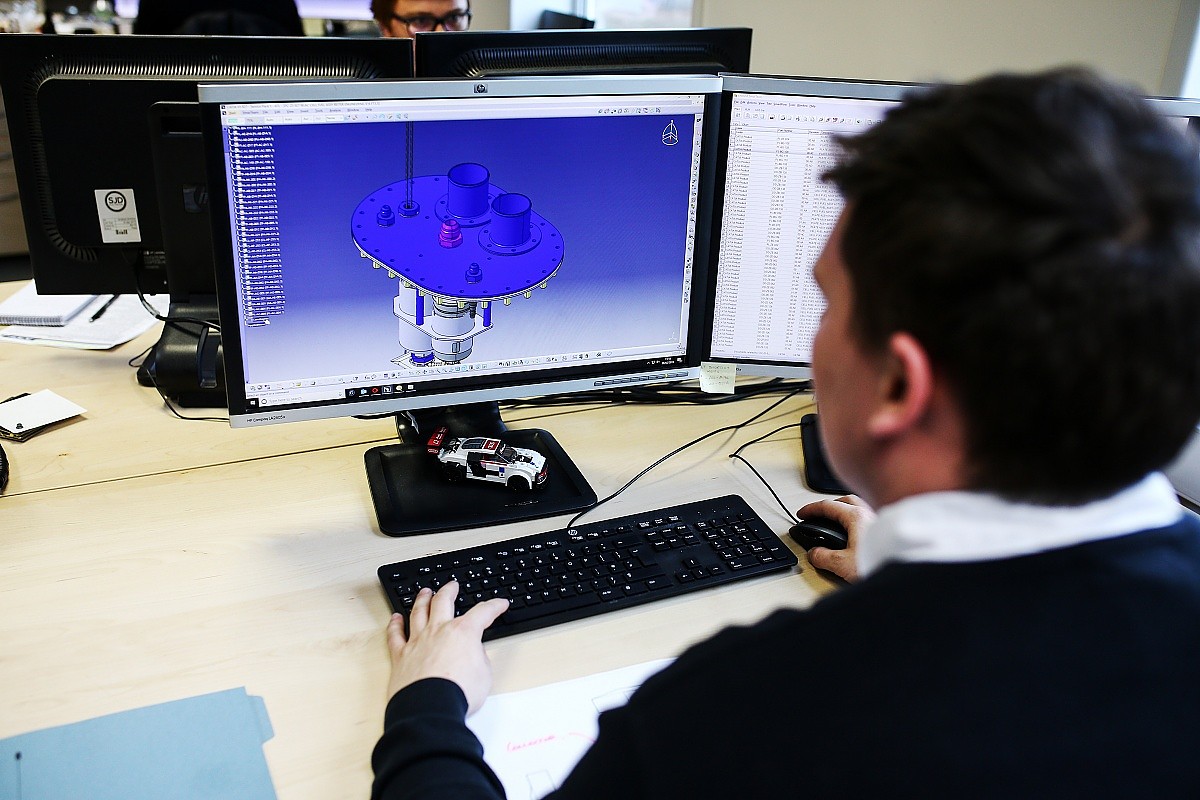 This privileged position has made ATL an active participant in regulatory discussions with the FIA's International Working Group, including the industry standard FT3, FT3.5 and FT5-1999, and it is in monthly contact about a range of topics from best practices for safety fuel-cell containers used in grassroots motorsport to the way volume displacement balls are used to equalise performance in sportscar racing, following Adrian Amstutz's fiery crash in the 2017 Spa 24 hours.

ATL is still owned by Regna today - and one of his original four hires, Richard Clark, is still with the US arm of the company in Ramsey, New Jersey, as VP of research and development. But it's the UK division in Milton Keynes that is the main hive of activity.

Now led by Giles Dawson, son of 1970s World Rally Championship ace and Dawson Auto Developments owner Andy, ATL has ballooned from a staff of 35 in 2013 to around 145 and continues to grow its motorsport activity despite a proactive effort to expand its non-motorsport projects.

"The nastiest crashes tend to be lower down the motorsport ladder, where people aren't spending as much money on the safety of their vehicle" James Gornall

"The technology that we're using today is all very related to what [Regna] created back then," says Dawson.

"Everything that we're transferring now into aviation, into military, into defence - it's all taking what we've learned through 30, 40 years in motorsport and applying it in different ways to the different markets."

Take a walk around the ATL headquarters and the walls are adorned with pictures of military drones, heavy-duty defence vehicles and helicopters using ATL technology, but the racing culture is unmissable.

In addition to Regna, whose own fiery accident in an Austin-Healey while practising for an SCCA meeting prompted him to start the company, Dawson has dallied in Ginetta racing, while Autosport's tour guide is James Gornall, the 2008 British GT champion and ATL's head of sales and marketing. 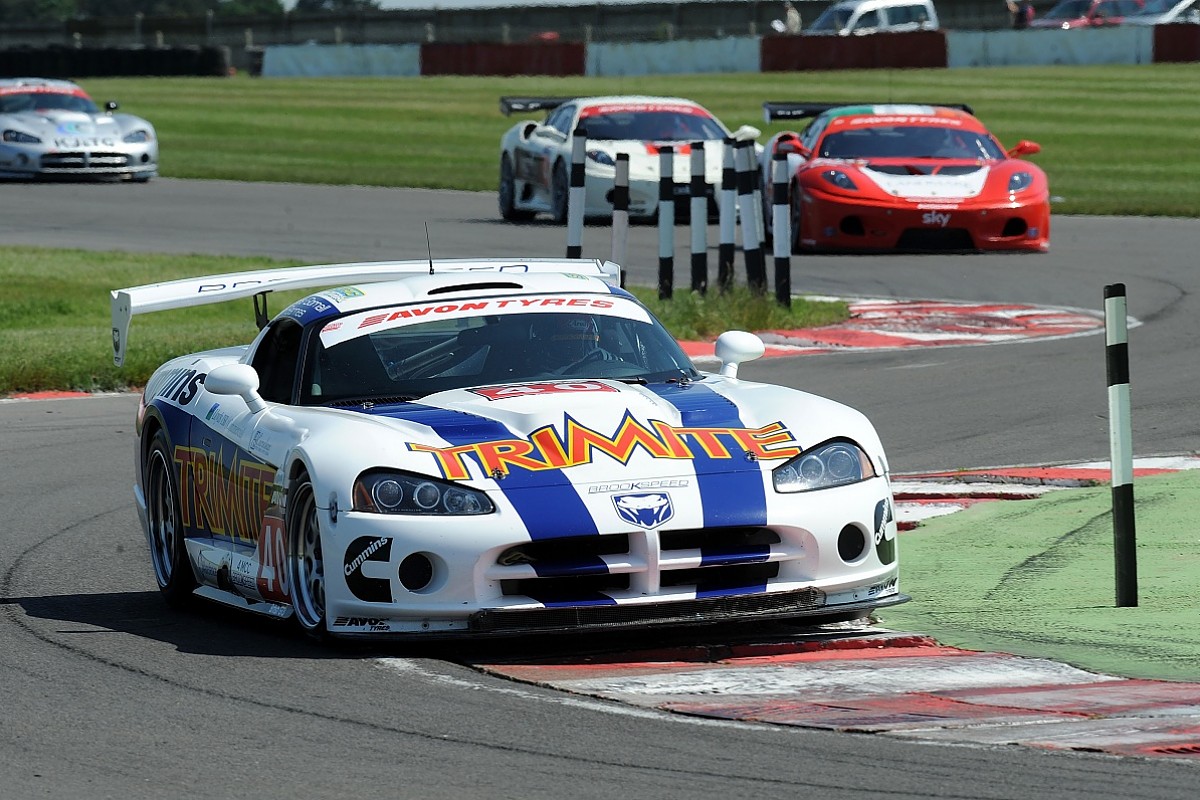 Gornall met Dawson while at university at Oxford Brookes and joined the company after a spell working as the championship coordinator for MSV Formula 2. Thankfully, today's grand prix machines are a far cry from the veritable bombs-on-wheels that caused countless talented drivers to perish before their primes in fire-related incidents in the 1960s and '70s.

But at the lower levels, where significantly less is invested in vehicle safety, Gornall is all too aware that apathy can have grave consequences.

With this in mind, ATL has developed the SaverCell range, with varying capacities from 10 to 170 litres, which is the cheapest and most popular fuel cell on the market today and is used in everything from the M-Sport Ford Fiesta R2 rally car to the Mercedes-AMG GT4, as well as in Junior Saloon Championship cars.

Gornall (below), who has returned to competition in the Mini Challenge JCW class this year, wants to change the perceptions national racers have and convince them to think of fuel tanks in the same way that they would insurance - as a necessity that is worth investing in.

"We're forced to purchase insurance for our road cars for a reason and many championships mandate a certain level of safety for a reason," he says.

"So if we're always innovating and looking for ways to bring our prices down, then that makes it easier for everybody to agree that it's a good move to apply that safety level to any championship.

"Sometimes we see big crashes in high-profile championships, but the nastiest ones tend to be lower down the motorsport ladder, where people aren't spending as much money on the safety of their vehicle. If you're going up Eau Rouge flat-out and hit the wall, you're having a big accident and the fuel tank is the one thing that will give you a big problem if it goes wrong.

"Of course, competitors maybe don't want to spend the money, and we understand that, so we make sure that we educate everybody - competitors and ASNs - on the options and they can make their own decisions based on the facts. 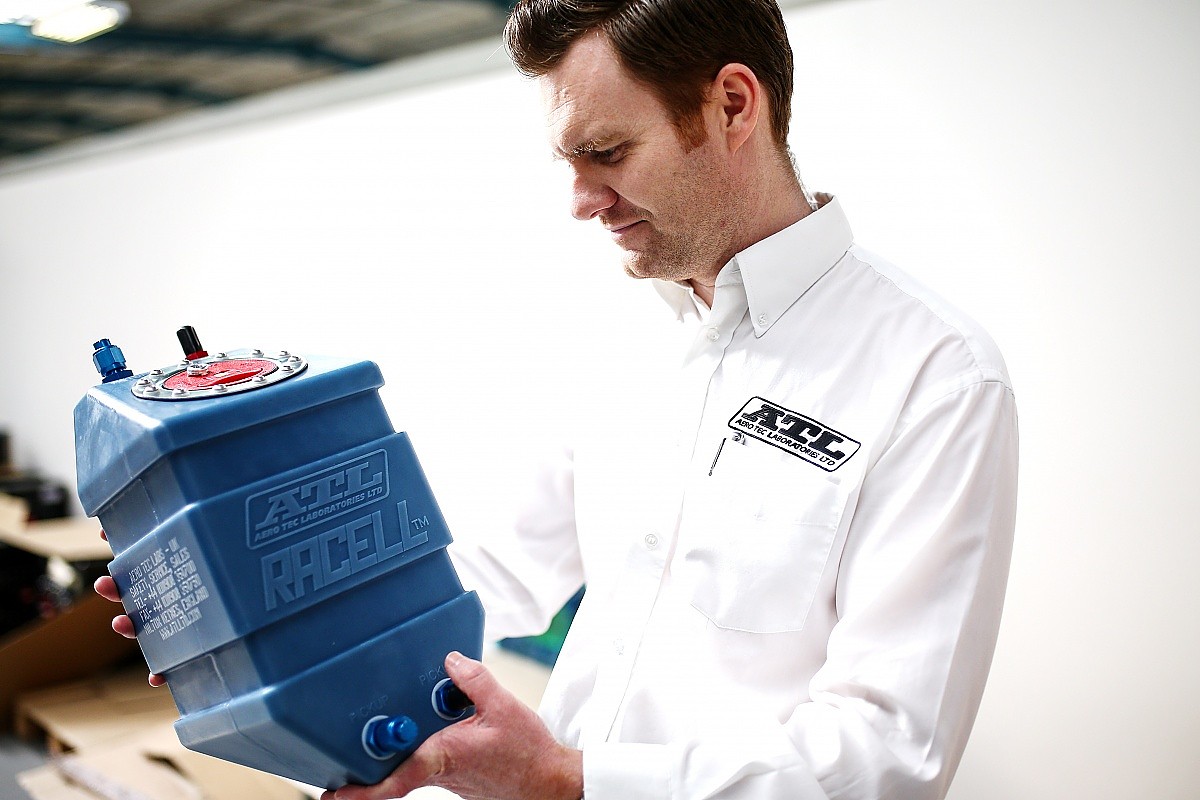 "The great thing about our product is that if people do adopt it for the lower formula, they will get themselves a performance benefit and even an advantage."

Although all are built to different criteria in terms of weight and material, ATL bladders use the thinnest materials possible to save weight and free up greater capacity to hold fuel.

The insides of the tanks feature clever baffle designs and are filled with carefully cut baffle foam - although Gornall explains this takes up only 2-3% of volume - which, as well as being effective explosion-suppressants, help prevent fuel sloshing in the tank, and assist with fuel pick-up.

This may seem simple, but after choosing a rival fuel-cell provider for their F1 debuts in 2010, Virgin and HRT both discovered to their cost the consequences of getting the baffling wrong. Arriving at the notoriously fuel-intensive Albert Park circuit, both found that neither had sufficient pick-up to finish - not helped in Virgin's case by famously designing a fuel tank that was too small.

"It had nothing to do with the volume of fuel they could get into the car," says Dawson.

"It was all about that last 30kg of fuel that they couldn't pick up because our competitor's internal baffle system was falling out with the g-loads.

"They had completely underestimated the force that's going on when that volume of fuel starts sloshing around inside the tank. When full of fuel, the tank supports itself, the baffles are doing nothing. But as the fuel level starts coming down, the inertia of the fuel and the g-force, particularly under braking, is what causes all the damage inside the tank." 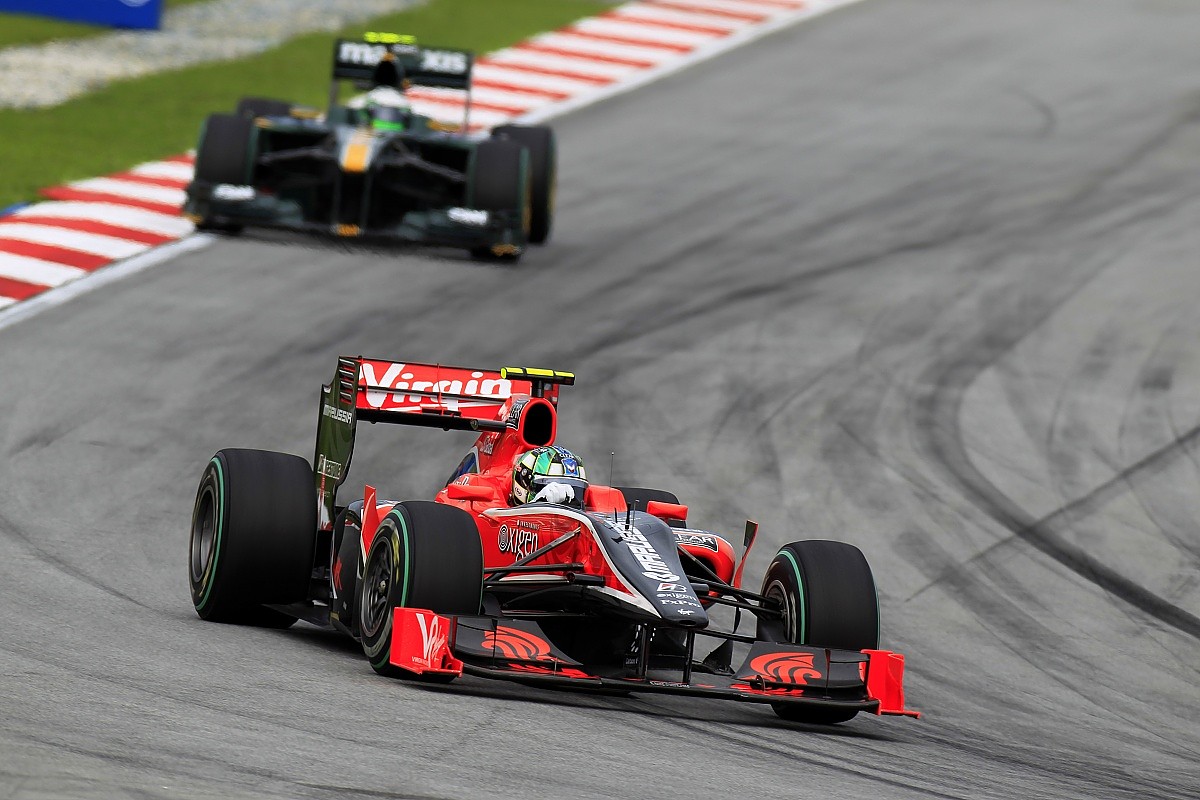 Both teams had changed to ATL by the start of the European season, and Dawson points out that Virgin's first finish, in the Malaysian Grand Prix, came with the smaller tank fitted with an interim ATL bladder, before the 'limousine' version with an elongated tank was introduced for the Spanish GP.

"Through our baffling, they could pick up every single drop," says Dawson.

"It's things like that which really highlight the raw material technology we've got being so much further on than everybody else."

Together with an arrangement of guiding vanes, collectors and trap doors that get the fuel to one central collection point when it is needed, the effect is especially noticeable in 24-hour endurance races, where running just one lap longer on fuel per stint can save several pitstops through the duration of the race.

By contrast, Gornall will have to run "at least 10 litres of fuel in the bottom" of the OEM-spec tank in his Mini to stave off fuel starvation.

"If a customer told us that he's getting fuel starvation at 10 litres, we would hang our heads in shame," he says.

"Even on a low-spec tank, if we can't go below a litre, we'd be disappointed."

Naturally, Dawson (below) admits to getting a kick from delivering the "ultimate product doing the ultimate job", but finds the performance of ATL products in accidents even more satisfying. 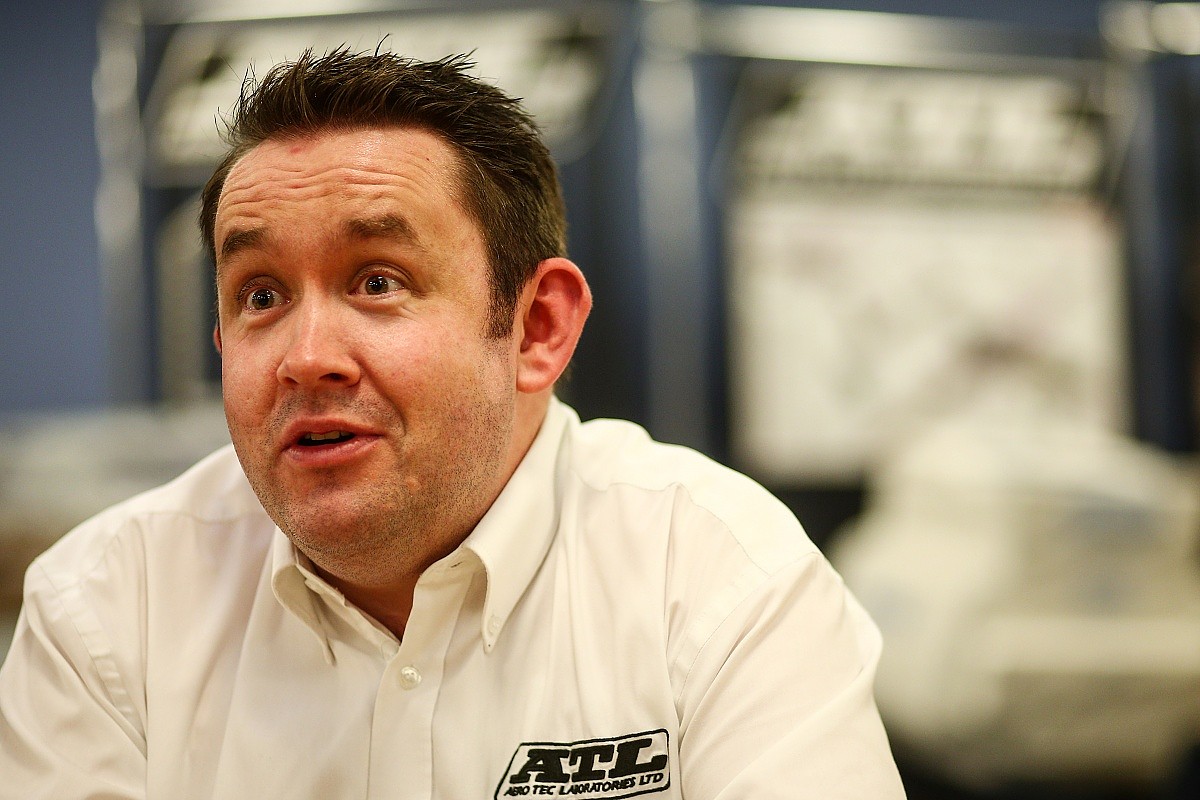 Thanks to the introduction of dry-break connectors that come away in the event of an impact, its FT5-1999 bladder was undamaged when Fernando Alonso's McLaren was launched into a spectacular roll in Melbourne in 2015. It was a similar story when Robert Kubica's BMW crunched into the wall in Montreal in 2007.

"That had a secondary impact with another piece of debris hitting it and the tank did exactly what we expected it to do," says Dawson.

"When we get in cars these days with our frontal head restraints, new helmet, racesuit and gloves, we expect it to be fine" James Gornall

"All the small fastening pins on the outside of the tank had come away and the tank had become that free body inside the chassis and was just rolling around in there. The tank came back, we put it in the jig, put the pins back on and sent it back. That for me is just as satisfying as seeing the results in those world championships."

Although its handiwork may not be as visible as other brands on the front line of motorsport safety, ATL's work is no less significant for it.

"When we get in cars these days with our frontal head restraints, new helmet, racesuit and gloves, we expect it to be fine, we don't think much of it," says Gornall.

"You don't see many fires these days and that's because of the hard work that goes on at the likes of ATL, the FIA, and with other manufacturers of safety products, making sure that the problems are few and far between."

This feature was first published in the Autosport Engineering supplement, which appears within the magazine every other month. The next issue, out on May 9, contains a behind-the-scenes look at the veteran engineering mind behind Formula 2's newest winning team, the rarely-seen model for running teams and the rise of university courses specialising in motorsport. 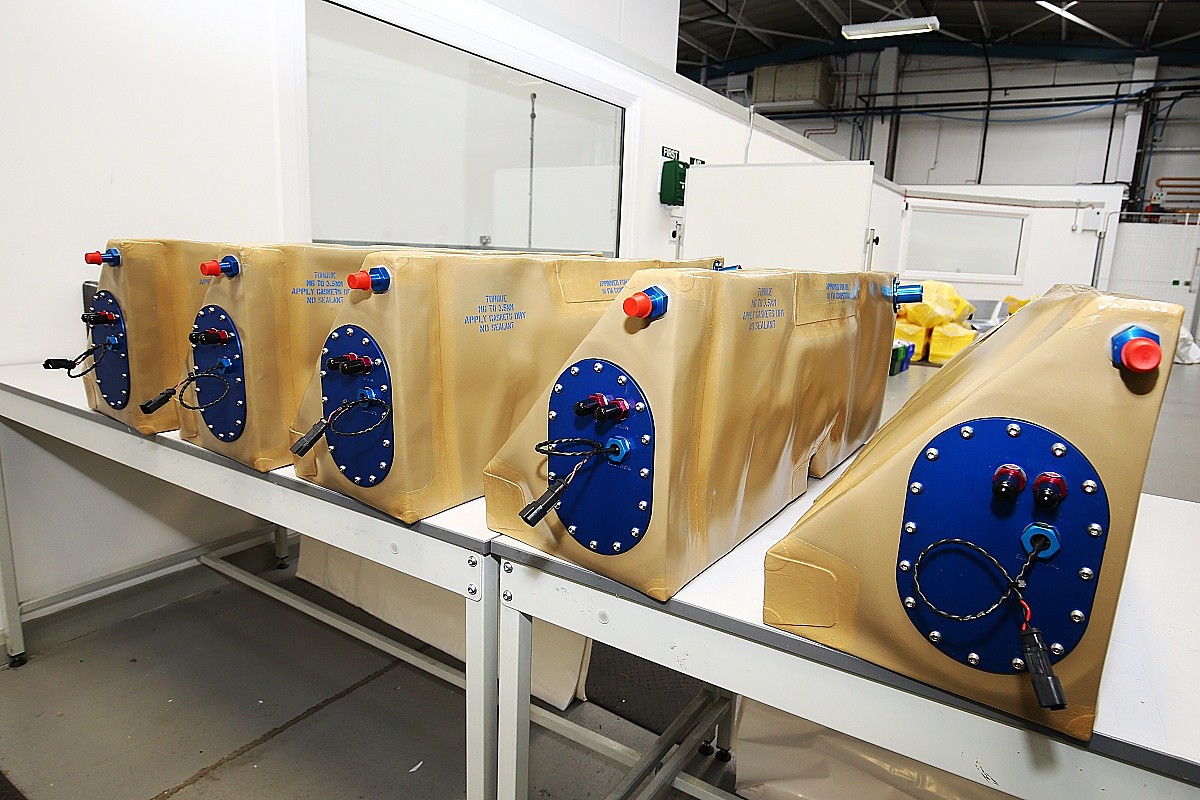