Rene Rast kept his and Audi's flickering DTM title hopes alive with a sensational win at the Red Bull Ring, despite entering the last lap in fourth place

Mercedes' Daniel Juncadella appeared to be in charge for the most of the race. But he found his lead wiped out by a late safety car that was called when Timo Glock parked his BMW by the side of the track at Turn 9.

Juncadella led the field very slowly around for the Indy-style double-file restart, pursued by the Audis of Mike Rockenfeller, Nico Muller and Rast, with enough time for three laps remaining.

The Spaniard survived the restart and was 1.2 seconds clear of Rockenfeller with one lap to go, but then came the news that he would be penalised 30s for a restart infringement.

Audi tactics then came into play, with first Muller and then Rockenfeller allowing Rast past in the final metres.

Although Rast took the chequered flag 2.8s behind Juncadella, the penalty dropped the on-the-road winner to 14th position.

Juncadella and Rockenfeller, pole and third respectively on the grid, benefited at the start from those in even-numbered positions being on the slippery side of the track after earlier rain.

An early safety car was called after Robin Frijns's Audi was spun around by the BMW of Philipp Eng at Turn 3, leaving debris on track. Rockenfeller pounced at the restart as Juncadella ran wide while defending at Turn 3. 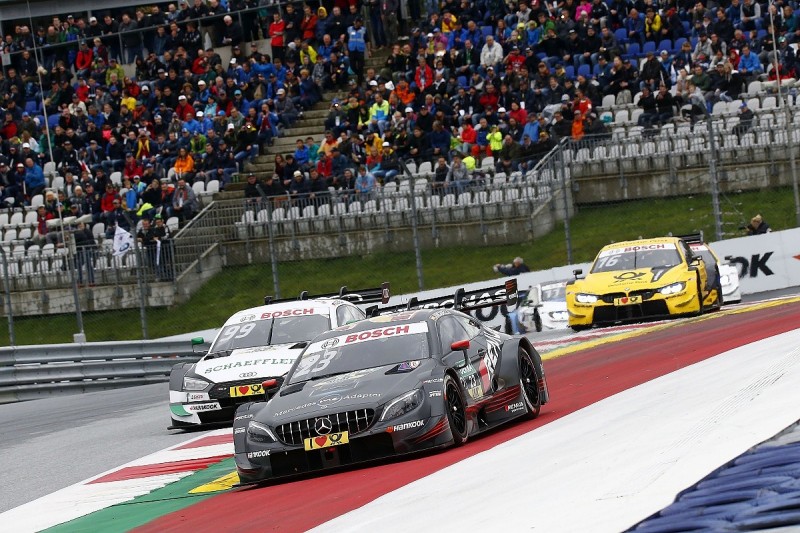 After the pitstops, Juncadella maintained the gap at around 3s, and the race seemed settled until the late caution.

Muller and Rast had moved up the order during the pitstop cycle, but found themselves in a train behind the third-placed BMW of Marco Wittmann.

The racing between this trio and the Mercedes of Paul di Resta was spectacular as they vied for the final spot on the podium.

Wittmann was the big loser at the restart and plummeted down the order.

With Audi locking out the podium, di Resta claimed fourth - a result that moves him into the championship lead over Mercedes team-mate Gary Paffett.

Paffett was caught up in the aftermath of the Eng/Frijns collision on the first lap. That dropped him to the tail of the field, where he was involved in a massive scrap outside the points with the recovered Frijns and Eng, as well as Pascal Wehrlein, before the late safety car.

In the end, Jamie Green came through to fifth for Audi from Lucas Auer's Mercedes, Wittmann and Eng.

Mortara was ninth but was penalised for shouldering Wittmann off the road, promoting Augusto Farfus's BMW to ninth and Paffett to the final point.

Di Resta now leads Paffett by nine points, with Rast 42 adrift and 84 still on the table.