Liam Lawson fended off Mercedes driver Maximilian Gotz to secure his second victory of the 2021 DTM season at the Red Bull Ring and thrust himself back into title contention.

Lawson had slipped to fifth in the standings after three non-scores in the previous two rounds, but the Red Bull Ferrari driver bounced back strongly in Austria to become only the second repeat winner of the year.

The 19-year-old made a clean start from pole position to lead into Turn 1 from Gotz, and was a second up of his rival by the end of lap two.

Gotz was the first of the leading duo to pit on lap seven, with the HRT team servicing his AMG GT3 in less than six seconds in a bid to undercut Lawson.

But the 2.5-second buffer the AF Corse driver had built was enough to hold onto the net lead, with Lawson emerging in front of Gotz after making his own pitstop a lap later.

Gotz rapidly closed in on Lawson in the final stages of the race as both finally cleared the late-stopping Audis of Nico Muller and Mike Rockenfeller, but he was never in a position to make a pass on the Kiwi.

Lawson eventually crossed the line just over a second clear of Gotz to score his first DTM victory since the Monza season opener, moving himself to third in the championship behind Kelvin van der Linde and Gotz.

While Lawson appeared to be in control up front, the battle for the final podium position went down the wire, with Philip Ellis narrowly holding into third from Lawson's team-mate Alex Albon and van der Linde. 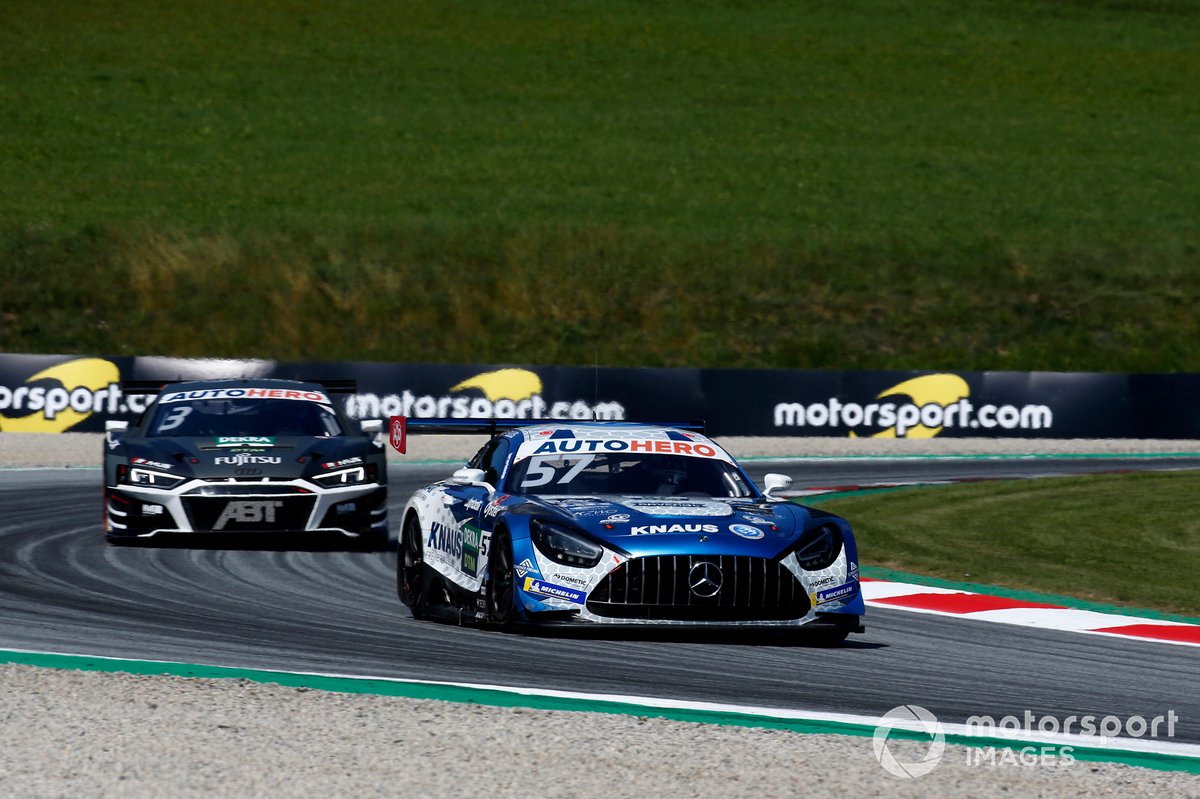 Having charged his way from eighth on the grid after two long battles with van der Linde and Arjun Maini, recent Nurburgring victor Albon was right on the tail of Ellis - despite 25kg of success ballast on his Ferrari.

Albon tried a bold move on Ellis’ Winward Mercedes on the outside of Turn 6 but ran slightly wide, making light contact with van der Linde as the Abt Sportsline Audi driver tried to take advantage of the battle ahead of him.

This allowed Ellis the breathing space to clinch his third rostrum finish of the season, as Albon and van der Linde finished close behind him in fourth and fifth respectively.

Coming into the weekend, championship leader van der Linde had warned that the Austrian venue won’t suit the Audi R8 LMS, but a top five result helped him limit the damage to his nearest rivals Gotz and Lawson.

Home hero Lucas Auer was eighth in the Winward Mercedes, while the top 10 was rounded out by HRT’s Vincent Abril and Rowe Racing BMW driver Timo Glock - the latter securing only his second points finish of 2021 after a tough start to the season.

Glock’s team-mate Sheldon van der Linde was in contention for a decent haul of points when he ran straight at Turn 4 with what appeared to be a technical problem, parking his M6 GT3 at the corner exit.