Rast again made a poor getaway at the start, losing his lead to fellow front-row starter Loic Duval on the run to Paddock Hill Bend, spending the early stages of the race in second.

But the DTM title favourite would return to the lead when he breezed past Duval on the run to Hawthorns at the end of the first lap.

Just behind, Muller had begun to climb his way up the order from eighth after a strong start gained him places before he then overtook Audi stablemates Mike Rockenfeller and Jamie Green.

Muller then moved up to second when he replicated Rast's move on Duval to breeze past his rival and begin his chase of Rast.

But Muller's bid to overhaul Rast took a heavy hit when the pair both pitted at the end of lap 10 of 42. 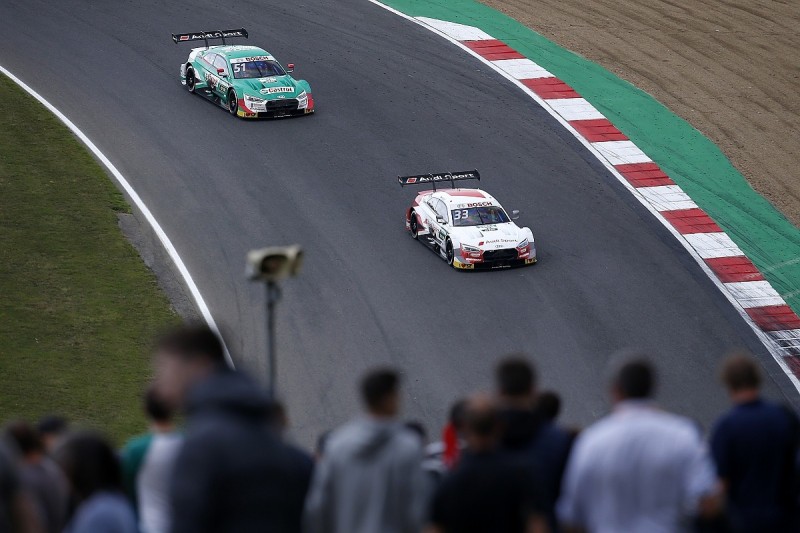 Returning in a net second place, once he cleared Robin Frijns and Duval while the pair completed their outlaps, Muller had a gap of 3.3s to make up to the race leader.

The battle then swung to-and-fro over the second half of the race and a series of fast laps allowed Muller to close within 0.2s at the flag, but he proved unable to prevent Rast from taking his fourth win of 2019.

Frijns completed the podium places in third, boosted by a long-running battle for fourth between Philipp Eng and Rockenfeller.

Eng had started ninth on the grid and ran a long-running first stint that allowed him to have a fresh rubber advantage in his second stint.

The BMW driver cleared Rockenfeller with a smart move on the inside of Surtees but found Duval a much sterner proposition.

The pair made slight contact at Surtees when Duval closed the door on the BMW at the exit of Surtees and a lap later Eng ran side-by-side with the Audi on the run to Hawthorns.

But Eng failed to find a way past Duval and instead settled for fourth ahead of Rockenfeller.

Sheldon van der Linde took seventh place after he narrowly avoided collecting the spinning WRT Audi of Jonathan Aberdein during their battle for the position.

Saturday race winner Marco Wittmann attempted to use a two-stop strategy after his climb from 12th on the grid slowed once he reached seventh place.

The gamble did not pay off and Wittmann ended the race in 10th.

Ferdinand Habsburg was 11th ahead of Timo Glock, while Aberdein recovered from his spin to place 13th.

Paul Di Resta, who led laps on Saturday, ended his race in 14th after a long-running first stint strategy was undone by a slow pitstop.

Jamie Green was 16th, while Pietro Fittipaldi had another off at Paddock Hill Bend and placed 17th.

Joel Eriksson, who failed to start the Saturday race due to a gearbox-related problem, retired from Sunday's race on after coming to a halt not long after the start/finish line midway through the sprint.