Mortara had to soak up pressure from Mercedes team-mate Gary Paffett, but held firm to beat the Briton by 0.6 seconds.

Paffett's result means he leapfrogs Timo Glock to move back into the championship lead, after the BMW driver could only finish 10th.

Mortara held the lead at the start, while front-row man Philipp Eng was passed by fellow BMW racer Marco Wittmann into the chicane for second place.

Eng was one of four drivers to head for the pits at the end of lap one, leaving Mortara to lead from Wittmann, Paul di Resta and Paffett.

Wittmann was 0.7s adrift of Mortara before he pitted at the end of lap seven, while the leading Mercedes made its stop two laps later.

Paffett went a further three laps before stopping just after passing di Resta for the lead, while di Resta went 10 laps longer still, during which time he'd lost out to the sister Mercedes of Lucas Auer.

The stops shook out with Mortara narrowly leading Wittmann and Paffett. BMW man Wittmann was the meat in a Mercedes sandwich, before Paffett managed to slip down the inside at Turn 1 with 26 laps remaining to take second place. 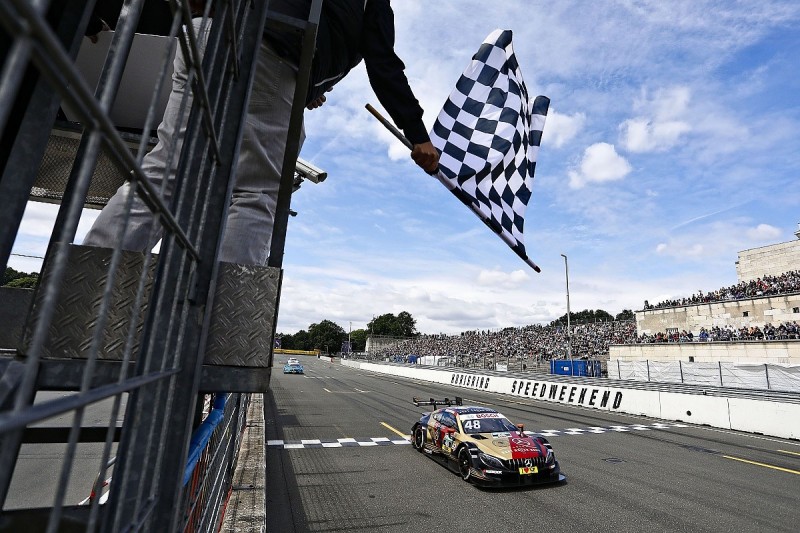 Paffett challenged stablemate Mortara, but there was no budging the Italian, who took his second win of the season.

Di Resta pulled off a great move on Eng to take what would become fourth place with 16 laps to go, by swooping around the outside at the chicane.

Eng held off the BMW of Bruno Spengler for fifth, with Auer, Daniel Juncadella (Mercedes), Joel Eriksson (BMW) and Glock completing the points.

Glock emerged from a frentic early scrap with top Audi man Nico Muller, at one point being forced to give a place back after earning it by contact.

Another collision between the two preceded Muller making a second visit to the pits, and he finished last.

Although Robin Frijns stayed out until one lap from the finish to lead in his Audi, it was 11th-placed Jamie Green who was the marque's top representative on a bad day for Ingolstadt.