Muller, who scored the second victory of his DTM career at the previous Misano round, achieved his second series pole position with a 46.337s lap of the 1.43-mile circuit set during his first qualifying run.

That effort was more than nine-tenths faster than the previous qualifying record - a 47.252s set by Tom Blomqvist in 2017 - and gave Muller pole by 0.075 seconds from BMW's BMW's Philipp Eng.

Eng, who is BMW's leading hope in the drivers' championship, split the Audi RS5s of Muller and second practice pacesetter Loic Duval with a 46.412s lap towards the end of his first run in the 20-minute qualifying session.

He will start fifth, however, after being docked three positions for blocking another car in qualifying, while Duval and Phoenix Audi team-mate Mike Rockenfeller were excluded for breaching parc ferme regulations.

That means BMW's Bruno Spengler will start second, as the 2012 champion's 46.492s lap, which briefly stood as the fastest time, gave him fourth in the provisional qualifying order. 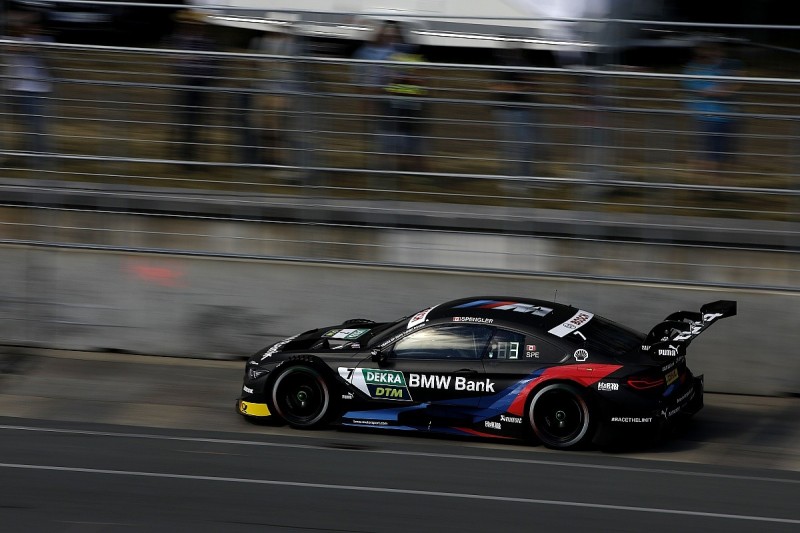 Audi's championship leader Rene Rast will start third ahead of Joel Eriksson, with Eng and Marco Wittmann next up.

The privateer WRT Audi RS5 of Jonathan Aberdein is seventh on the grid after he set a time that was 0.280s away from Muller's, ahead of Jamie Green - who is returning this weekend after missing the Misano round as he recovered from an operation.

Daniel Juncadella was one of a handful of drivers to improve on his second qualifying run, with his 46.893s effort lifting him to 13th to ensure the final four places in the qualifying order were not occupied by R-Motorsport's four Aston Martin Vantages.

Juncadella's lap was more than two tenths faster than the next best time managed by an Aston - that of Paul di Resta, who qualified 16th.

Only 18th-place qualifier Jake Dennis was outside the previous pole position record time in his Aston Martin Vantage.