In a race punctuated by three safety car periods, fourth-placed Muller made light contact with the BMWs of Marco Wittmann and Jonathan Aberdein as the trio went side-by-side at the first restart.

While Muller escaped the incident, he subsequently received another hit from Green at Turn 2, the contact turning his Abt Audi around and leaving him facing the wrong way.

The Swiss driver dropped to last place before he could rejoin the field, but was able to take advantage of an early stop to claw back to fifth, limiting the damage to title rivals Robin Frijns and Rene Rast, who finished first and second respectively.

Muller, however, doesn't hold Green responsible for the incident, saying it was a direct consequence of the "mess'' caused by him being sandwiched by the two BMW drivers at the restart.

"Honestly I think the main reason for the incident was the various 13 cars in the field [not in the title fight] that had nothing to lose anymore," Muller said.

"You feel obviously you have action-packed races with those safety car restarts, some of them are being quite aggressive on the first few corners.

"Yeah, I think going into Turn 1 after the restart we were already three wide with Wittmann and another BMW [Aberdein] on my left so I was in a sandwich. 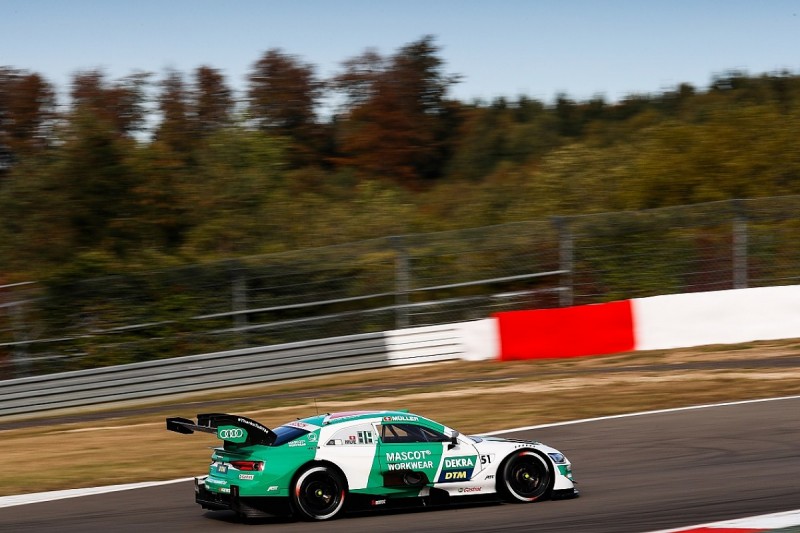 "Marco turned in from right but I couldn't go anywhere as I had a car on the left and I got touched by this car on the left. I then touched Marco which obviously kind of let to Turn 2 being a mess.

"Jamie I think wanted to get through the inside of us and hit me in that corner, which is annoying and it shouldn't happen, especially when you have the same emblem on the car, which is the four rings in our case.

"Obviously annoying. But I don't really want to blame him. It was a messy situation. Everybody was trying to keep up or make up position.

"He apologised for it and I think he also feels really shit which we don't want to see."

Green said he tried to avoid the chaos at the restart, but couldn't prevent himself from hitting the rear of Muller's car after locking up at Turn 2.

"Firstly it's from my point of view that's the sort of nightmare scenario I don't want to be involved in incidents with anybody around, certainly other Audis," Green said.

"I don't really know how it happened. He had some battles in front and I was trying to keep the car on the inside for Turn 2 and Nico for whatever reason was quite slow in the middle of the corner.

"I don't know if he was trying to get a good exit, but basically I locked up trying to avoid any contact and couldn't slow down and clipped the back of his car which spun him around. Not a good situation at all."

Asked how Muller responded when he apologised to him, Green replied: "He said 'shit happens'. So I think he was quite philosophical.

"I think he knows me and knows I wouldn't do anything like that on purpose. I said to him I'm really sorry. Unfortunately there's not anything more I can do at the moment."

Kubica having to rely on engineers to perform DTM pitstops