At Lausitzring last time out, Audi sealed the manufacturers' crown convincingly over BMW and Aston Martin, with victories for Rast and Muller pushing leading BMW driver Marco Wittmann further out of contention for the drivers' title.

Audi has confirmed it will now switch its attention to fully supporting Rast and Muller's title fight, and it is evaluating giving both drivers new engines to help ensure reliability is not a factor.

Muller trails Rast by 20 points heading to the penultimate round at the Nurburgring, and the pair recently admitted to a degree of "tension" between them.

Following Brands Hatch in August, Berger had said: "If he always reluctantly gives in as a title contender and is satisfied with second place, then his reputation as a racer will be damaged. The killer instinct that flashed up at his last races showed me that he has that instinct."

When Muller was asked for his take on Berger's comments, the Audi driver told Autosport: "I can understand what he means, and for sure he's right, we all want to win, and I'm the first to try to go all-in on this chance we're having at the moment.

"But we all have to understand that racing a team-mate is something different than if it's a BMW or an Aston Martin. 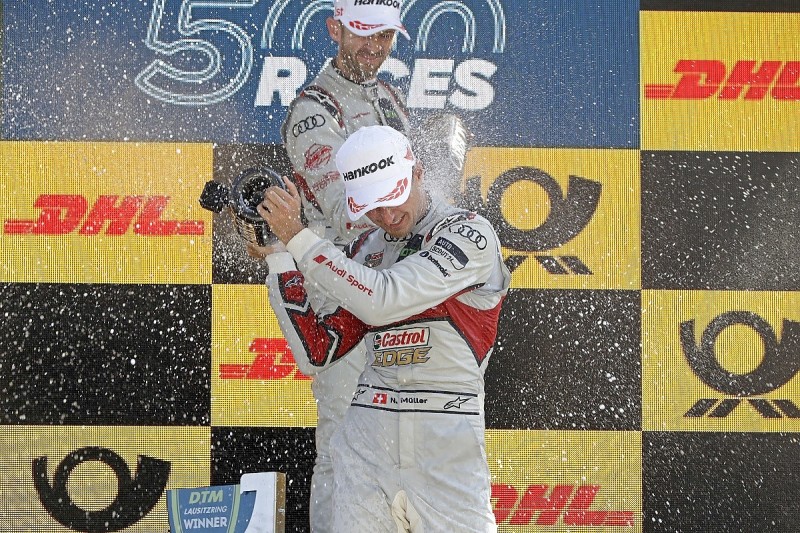 "We can't take silly risks. We are in the position at Audi this year that we're the ones with a lot to lose, and everybody else has a lot to win.

"We can't afford to look stupid in the end because of silly things, and that's why we limit risks and do our best and still the fastest one should win.

"I admit, Rene is the man to beat. It's not that we are the ones who have to hold back to make him win, he is super-strong and sometimes he has days where you can beat him and we were definitely in that position a few times.

"We try to focus on what we have to improve to be able to beat him on pure performance.

"All the rest, people can talk, I'm happy to listen and read as it gives a little spice to the thing and keeps spectators and crowds entertained, which is good, and we focus on our jobs."

Former Audi driver Timo Scheider had stirred controversy through his blog for DTM broadcaster Sat.1 and was the first to suggest there was tension between Muller and Rast.

He has since ended up in a war of words with Rast after the DTM title leader claimed Scheider's comments were based on "false facts", with the pundit then refuting Rast's take.

When Autosport asked Berger for his view on Scheider's comments, he said: "I don't care. I'm happy to have controversy discussions.

"I just don't agree [with Schieder] at this stage and I said to the German journalists, I'm quite upset with the superficial way this is taken [by the media]."

Berger added that this was because he believed Muller's approach to racing Rast wheel-to-wheel "made sense", but reiterated that Muller "needed to perform or his career is in danger".

Autosport understands Audi's rules of conduct is that a driver is to let a team-mate who is clearly quicker past, and that push-to-pass is not to be used against other Audi drivers in order to help reliability.