The Belgian, just five races into his DTM career, had an untroubled race, leading the entire race on his way to BMW's third victory of the season.

While Martin was the fastest man on the track, the win still needed a little bit of luck. His strategy was almost derailed on Lap 23 when Timo Scheider's stranded Audi sparked a safety car, which could have brought the drivers who started on the harder tyre into the race.

But a second, longer safety car period - caused when the best of the 'hard starters' Mike Rockenfeller crashed into Adrien Tambay at the restart - wound up giving Martin some breathing room for the short final stint, leaving him free to take a 4.2-second win over BMW team-mate Bruno Spengler.

"It was a perfect day," he said at the finish. "First pole, first victory in my fifth race. I'm very happy."

While Spengler had a fairly quiet day on his way to second place, the final podium spot was much more keenly contested.

Tambay held third from the early running, but was out of the race as soon as he was hit by Rockenfeller.

That left Timo Glock in third place, but the ex-Formula 1 driver lost pace in the final few laps, allowing Mattias Ekstrom to ruin BMW's chances of a clean sweep of the podium by barging his way through to third. 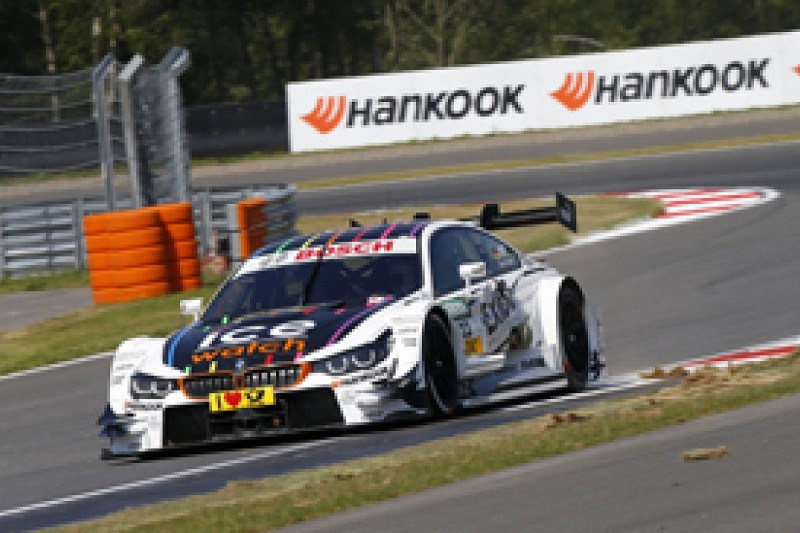 Points leader Marco Wittmann and Audi's Nico Muller also managed to get past Glock, finishing fourth and fifth respectively, while Glock hung on to finish sixth.

Christian Vietoris was the best placed Mercedes, coming home seventh. The Oschersleben winner started back in 21st, but quickly wrangled his way into points contention by making up 12 spots in the first six laps.

Like Martin, he was then helped by the timing of the safety cars, having pitted for the harder tyres before the pit-lane was closed for the first caution.

Pascal Wehrlein capped off a decent day for Mercedes, given their qualifying form, by finishing eighth ahead of Edoardo Mortara, while Augusto Farfus wound up being the best of the drivers who started on the standard in 10th.

For the Brits in the field, it was a tough day. Jamie Green's race was effectively over on the first lap when he was spun by Mortara, while Paul di Resta had something fail on his Mercedes before the 10-lap mark.

Gary Paffett made the finish, but could manage just 16th.