Wittmann was allowed to escape at the start in part thanks to the efforts of Robert Wickens who, promoted to third on the grid after a qualifying crash forced third-place qualifier Maxime Martin to start from the back, pestered Blomqvist at the start of the first stint.

That allowed Wittmann to build a comfortable three-second cushion before the pitstop phase, and after completing a clean stop eked out his advantage until the finish.

Blomqvist recorded his third second-place finish of the season well clear of those behind, with Bruno Spengler and Augusto Farfus completing a BMW 1-2-3-4 after working their way around an ailing Wickens.

Leading Mercedes man Wickens had dropped away slightly from Blomqvist before the pitstop phase, with a slow stop dropping him further back before he began to complain about the driveability of his C63. 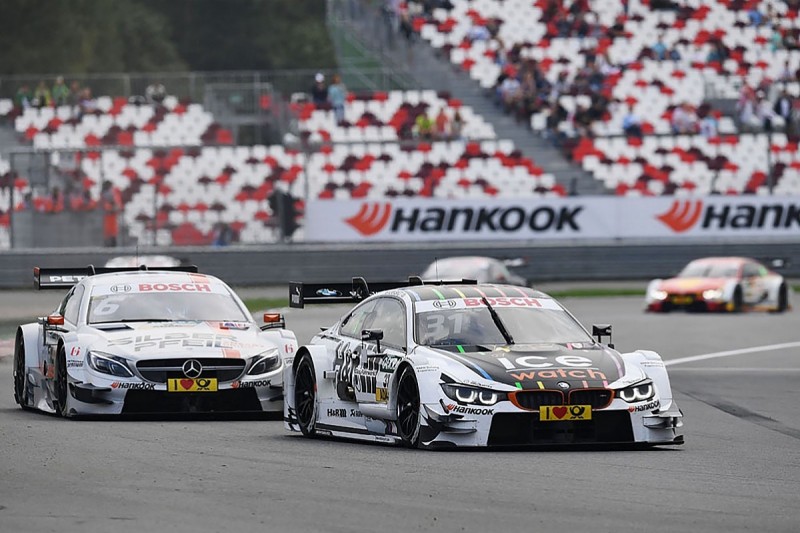 Wickens was rapidly caught by the chasing pack, led initially by HWA team-mate Dani Juncadella, and though he was able to put up a fight he was soon picked off by Spengler at Turn 2 on lap 30 after the BMW driver had worked his way around Juncadella.

Spengler raced away from there into a clear third, but Farfus was another man to make it by Wickens before the finish, the Brazilian making the most of an aggressive strategy to emerge in sixth behind Juncadella before jumping the Spaniard and Wickens to claim fourth.

Having taken the lead of the championship a day earlier, Wickens did at least limit the damage with a dogged run to fifth, just holding off Edoardo Mortara for the position at the flag.

Juncadella finished 12th, paying the price for assisting Wickens' cause, while Paul di Resta also dropped out of the points late on after he was handed a drive-through penalty for pushing Timo Glock out of the race.

DTM title contender Wickens hits out at Tomczyk over collision