The Belgian RBM team elected to put sixth-row starter Eriksson on slick tyres for the start of the damp race and the Swede, the only runner not to begin on grooved rubber, lucked in thanks to a handily timed safety car.

Eriksson struggled at the start, even dropping behind BMW guest Alex Zanardi as he plummeted to the tail of the field.

One by one, as Eriksson got closer to the crossover where slicks would be quicker, the majority of the field pitted for dry-weather tyres.

Edoardo Mortara had got the jump on Audi's polesitter Loic Duval at the start, with Daniel Juncadella following through to make it a Mercedes one-two.

By the time the rain returned in earnest, around the eighth lap, only Mortara, Audi pair Rene Rast and Robin Frijns, and Zanardi remained on wet-weather tyres, while Eriksson was running fifth on his slicks.

Eriksson timed the moment perfectly to make his mandatory stop onto wet tyres, as those who had already pitted for slicks were forced in for a second time, all of them dropping off the lead lap.

Lucas Auer, having just emerged from the pits on wets, lost it at Turn 6 and backed his Mercedes into the tyre wall, prompting a safety car.

That allowed Eriksson, the only driver on the lead lap to have already made his mandatory stop, to latch onto the train and effectively gain his pitstop for free.

At the front, Mortara put the hammer down to try to establish enough of a buffer over Eriksson to make his stop and clear the BMW when he returned to the track.

The Italian's stop came with six laps remaining, and for a moment Rast, who had pitted three laps earlier, threatened the leading Mercedes. 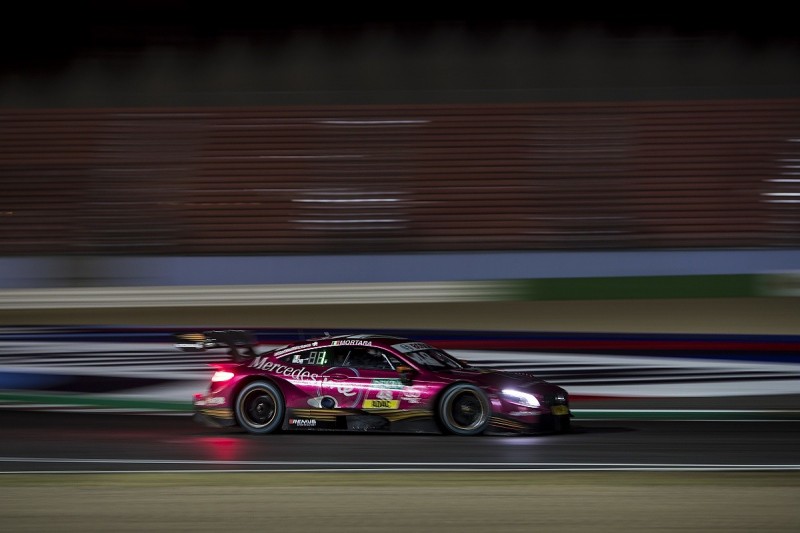 Mortara was 15 seconds behind Eriksson one lap into his final stint, with five laps remaining, and sometimes slashed 3 seconds per lap out of the leading BMW, but Eriksson held on to win by 1.817s.

Rast was third, Frijns took fourth, while Zanardi took an emotional fifth on his one-off outing in a specially adapted BMW.

Paul di Resta was the first of the double pitters, charging from almost a lap behind Zanardi to a mere 12s deficit as he claimed sixth in his Mercedes.

The Scot passed Duval with eight laps remaining, while three more Audis - those of Jamie Green, Mike Rockenfeller and Nico Muller - rounded out the top 10.

BMW's Bruno Spengler also claimed a point as Zanardi is ineligible to score.

Di Resta's points for fifth give him the championship lead over Gary Paffett, whose miserable weekend continued when he was pushed into a spin at Turn 2 by Juncadella while trying to make a move on Spengler.

Juncadella had already blotted his copybook by spinning in the pit entry when the rain came.