Audi's Edoardo Mortara claimed his third victory of the DTM season from sixth on the grid at the Nurburgring, after a tense battle with Mercedes' Lucas Auer

The Italian passed Audi team-mate Jamie Green and BMW man Augusto Farfus at the start to move up to fourth, before excellent pace ahead of his pitstop helped him leapfrog Tom Blomqvist, Bruno Spengler and Marco Wittmann.

Mortara opted to pit much later than his fellow podium finishers, coming in on lap 28 as opposed to early stops on lap 17 for Auer and Wittmann.

Polesitter Auer led Wittmann during the first phase but as the pitstops shuffled the field, Mortara emerged ahead of the BMW driver to present a new challenge.

Mortara's much fresher rubber at the end of the race enabled him to close up to Auer by the end of lap 32, and with a little help from DRS, he got the move done into the Turn 1. 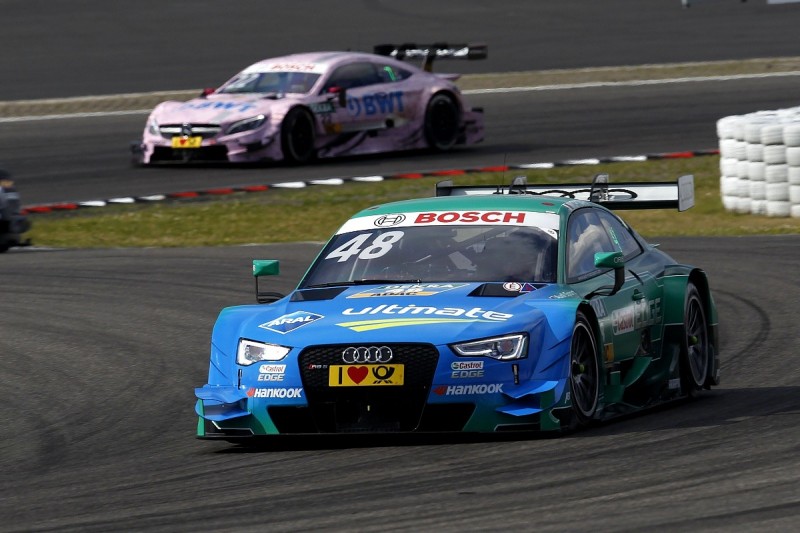 The fight for third place intensified as the race drew to a close, with Mattias Ekstrom - who started 10th on the grid - zeroing in on Wittmann.

Ekstrom got into DRS range with just one lap to go, but ultimately ran out of time to catch the points leader, and finished fourth, while Nico Muller made it three Audis inside the top five.

Wittmann's main championship rivals Robert Wickens and Green finished well outside the points in 14th and 17th, ensuring that the German retains the lead despite Mortara's victory.

Green looked set to score points, but when he exited the pits on lap 24 he did so right into the path of Paffett, sending his fellow Brit into a spin.

Paffett eventually recovered to finish seventh, but Green was handed a 10-second stop-go penalty for the collision.

Paul di Resta was the only retirement of the race; he collided with Timo Glock at the start after being blocked on the inside by Timo Scheider.

Glock dropped to the back of the field, and while he was able to recover to 15th place, di Resta was forced out with broken steering.