Thomas Preining scored Porsche’s first DTM victory in an eventful race at the Norisring plagued by incidents and interruptions, as Dennis Olsen made it a 1-2 for the Weissach marque.

Starting second on the grid, Team Bernhard driver Preining avoided the carnage around him to win by 3.67s as SSR Performance stablemate Olsen capitalised on a penultimate lap error from Rene Rast to snatch second.

Three-time DTM champion Rast, who had briefly led the race but suffered a slow puncture in the latter stages, finished third ahead of Laurens Vanthoor in the second SSR Porsche, while Philipp Eng (Schubert BMW) and defending champion Max Gotz (Winward Mercedes) completed the top six after an eventful race in which several contenders fell by the wayside.

At the start, poleman Kelvin van der Linde (Abt Audi) held the lead as fellow front-row starter Preining went deep around the outside.

A fast-starting Arjun Maini (HRT Mercedes) attempted to follow that tactic, but was turned around by the Grasser Lamborghini of series debutante Franck Perera which caused a chain-reaction behind that eliminated several cars - including points leader Sheldon van der Linde, Nico Muller and Marco Wittmann.

Following the restart on lap seven, Preining passed Kelvin van der Linde and held the lead until a full course yellow caused by Alessio Deledda (Grasser) ramming Esteban Muth from behind into Turn 1 and sending the Walkenhorst BMW spinning into Perera on lap 14.

Preining pitted a lap earlier than van der Linde, who was followed in on lap 17 by Rast. When the South African was held, to avoid an unsafe release as Vanthoor came in behind, Rast got away first and also jumped Preining to take the lead.

Rast led the field back to green for the restart on lap 20, but as he had done earlier to van der Linde, again Preining seized the lead around the outside. 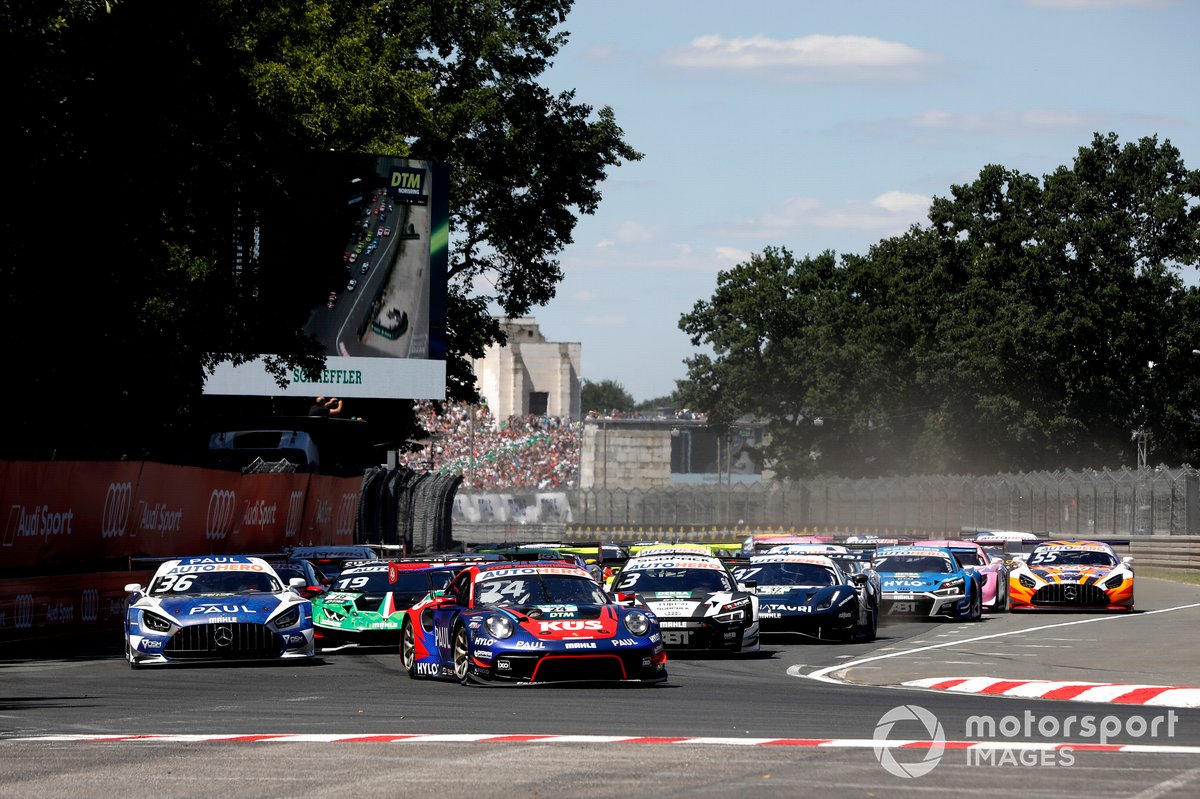 Preining ran deep into Turn 1 at the start but survived contact - behind, Maini and Perera were not so fortunate

However, the racing was short-lived as Maro Engel’s Gruppe M Mercedes was fired into the wall approaching Turn 4 following contact with Mirko Bortolotti – the Grasser Lamborghini driver attempting to recover having been demoted to the back of the grid for not going to be weighed after qualifying.

Preining then had to lead the field back to the restart on lap 29 and held on as behind Olsen and Rast touched – the Porsche driver getting sideways but holding onto second into Turn 1.

However, there was again chaos behind as debutant Ayhancan Guven (Red Bull Ferrari) tagged Lucas Auer’s Winward Mercedes at Turn 3, while Bortolotti punted van der Linde into his team-mate Ricardo Feller at Turn 4 – causing both the Italian and South African to drop out with damage.

Preining again held onto his advantage when the race restarted for a fifth time on lap 34, as Rast got back ahead of Olsen by running the Norwegian wide into Turn 1 – briefly promoting Vanthoor to third.

After diving back ahead of Vanthoor into Turn 2, Olsen piled the pressure on Rast and punted him sideways at Turn 4 on lap 38. But the Audi man somehow remained ahead until he ran wide on the penultimate lap, gifting an opening to Olsen.

Behind Vanthoor, Eng made strong progress in the closing laps by passing the delayed Feller, then Gotz into Turn 1, while Luca Stolz came from the back of the grid after a gearbox failure in qualifying to pass Feller late on for seventh.