Kelvin van der Linde became the seventh different polesitter in as many DTM races this year, as the Abt Audi driver topped Group B in split qualifying at the Norisring.

After coming close to a maiden podium with the single car Team Bernhard 75 Porsche squad at Imola, Preining will therefore join van der Linde on the front row in his best qualifying effort to date.

Guven, who is filling in for Nick Cassidy in the AF Corse-run Red Bull team while the Kiwi is on Formula E duty in Marrakech, will start third ahead of fellow newcomer Franck Perera, the factory Lamborghini driver 0.070s behind Preining as a last-minute replacement for an unwell Rolf Ineichen.

The third row will be shared by Lucas Auer (Winward Mercedes) and Rene Rast (Abt Audi), while championship leader Sheldon van der Linde will start 22nd after a tough opening session for the Schubert BMW driver.

But he will start ahead of main championship rival Mirko Bortolotti, who was disqualified from qualifying after contravening Article 32.6 of the DTM sporting regulations by not presenting himself to be weighed.

The Grasser Lamborghini driver will therefore start from the back of the grid. 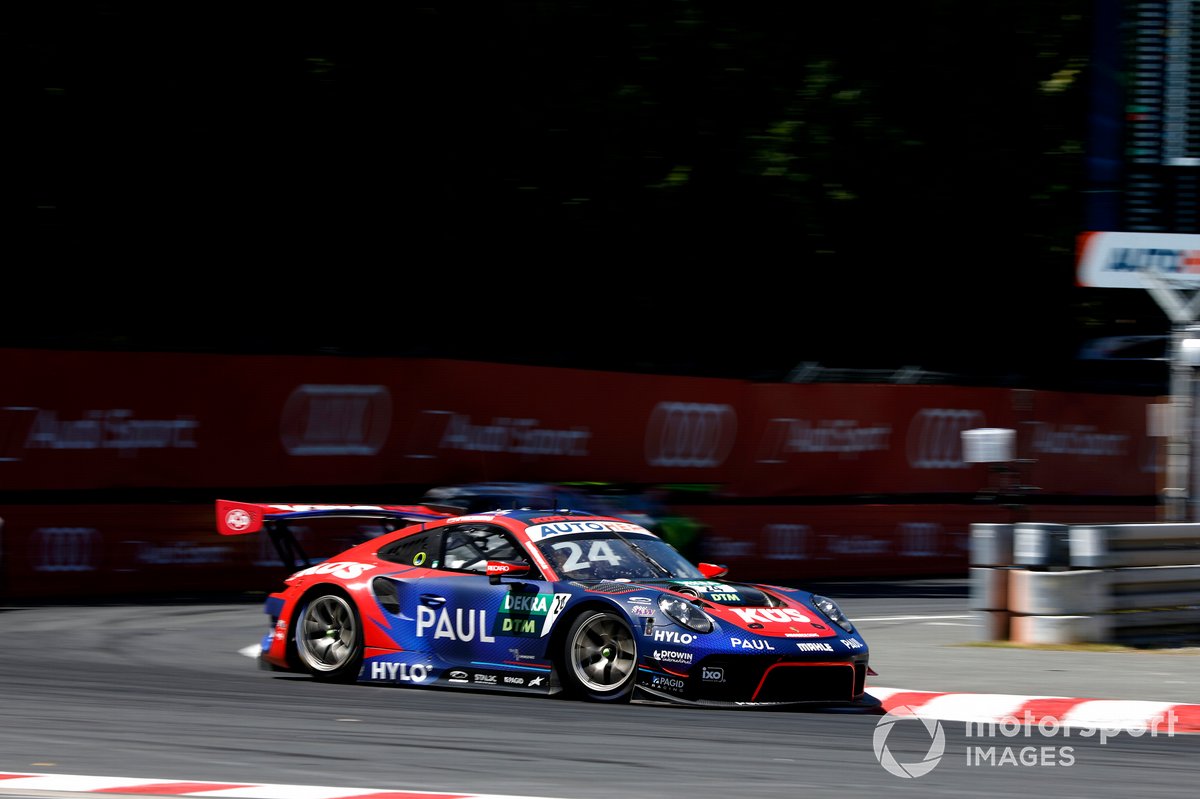 Kelvin van der Linde exchanged fastest times early in Group B with Dennis Olsen’s SSR Performance Porsche, and it was the Norwegian who was 0.008s ahead approaching the halfway point of the session.

But after Guven had moved to the head of the times approaching the latter stages, van der Linde was the only driver able to respond on his second set of tyres and deny the ADAC GT Masters regular a remarkable debut pole.

Auer was just 0.093s away from the top spot, but will start fifth. Bortolotti was next quickest in Group B and was due to start from seventh, but losing all of his times will promote Ricardo Feller (Abt Audi) and Olsen to positions seven and nine on the grid.

Preining’s best effort in the opening session, a 49.252s, was one of two laps good enough to put him on the front row, having found an extra 0.004s to make sure of his position ahead of Perera.

Austrian Preining had exchanged top spot with Rast for much of the Group A session, with three-time DTM champion Rast ahead by just 0.072s at the halfway point.

But following a visit to the pits for fresh rubber, Preining unlocked even more pace from his Porsche and edged ahead on 49.403s with three minutes to go.

He then set a 49.256s to move almost two tenths ahead of Rast, before Perera elbowed his way onto the second row.

Behind Rast were Arjun Maini (HRT Mercedes) and Nico Muller’s Team Rosberg Audi, who will start eighth and 10th respectively.

Maini’s team-mate Luca Stolz was unable to set a time and remained in the garage with a gearbox problem.