Felipe Fraga converted pole position to his maiden DTM victory at the Norisring, the Red Bull Ferrari driver triumphing in a caution-free race as Mirko Bortolotti claimed the points lead.

Fraga led every lap and was never challenged after holding the lead at the start, crossing the line 2.70 seconds clear of Grasser Lamborghini racer Bortolotti and treble champion Rene Rast to become the DTM's first Brazilian winner since Augusto Farfus in 2013.

Fraga held the lead at the start, which was noticeably better-behaved than in Saturday’s chaotic race, and proceeded to gradually pull away at the front.

Behind, he was chased by fellow front-row starter Bortolotti, Marco Wittmann’s Walkenhorst BMW and the Abt Audi of Rast, who made a good start to jump defending champion Maxi Gotz (Winward Mercedes) and race one winner Thomas Preining (Team Bernhard Porsche) from sixth on the grid.

A tardy start from Preining meant he also slipped behind the SSR Performance Porsche of race one runner-up Dennis Olsen to sixth, which became seventh when Fraga’s team-mate Ayhancan Guven finally made the pressure tell with a clean pass into Turn 4 on lap 22.

That came two laps after Rast had become the first of the top four to peel into the pits, and one lap after a slow left-rear tyre change for Wittmann meant the two-time champion dropped behind the Audi. 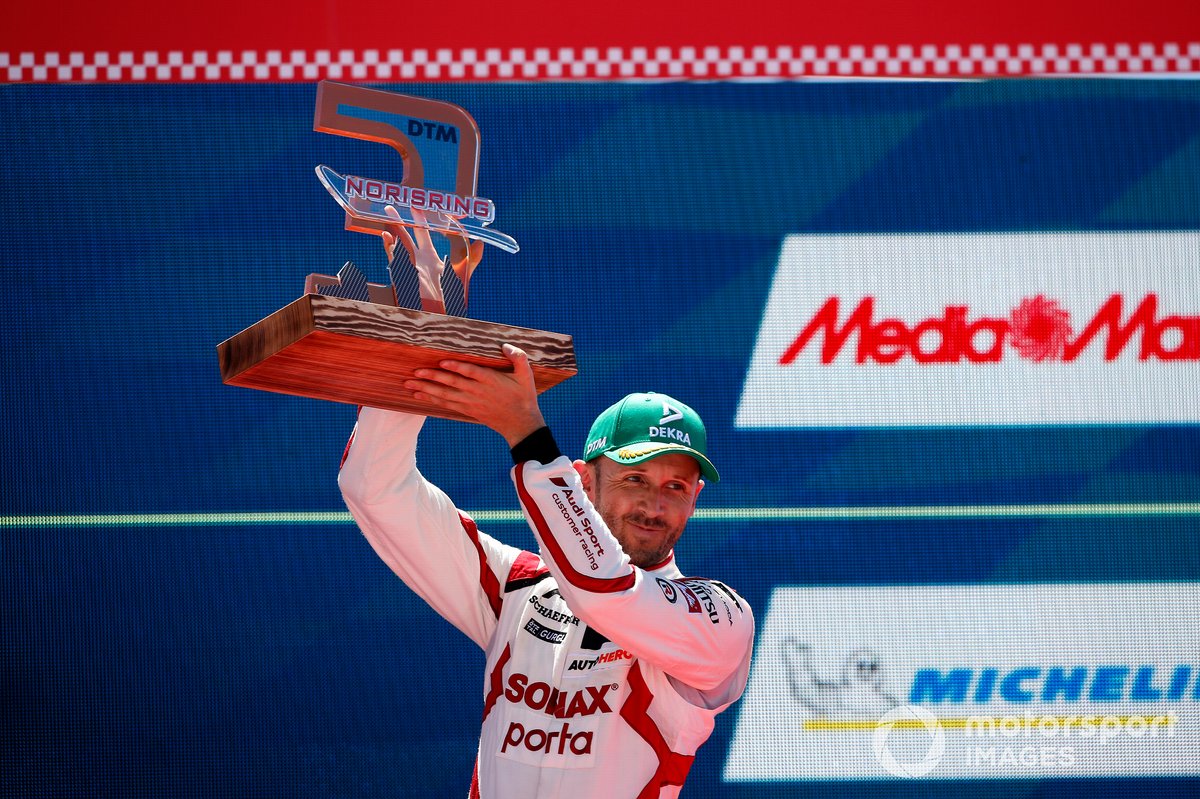 Trouble-free stops for Fraga and Bortolotti meant the pair emerged safely ahead of Rast, who completed the podium for the second day in a row to move up to third in the standings – despite carrying an additional 10kg in Balance of Performance and success ballast.

Wittmann took a comfortable fourth ahead of Olsen and Gotz, with Guven claiming seventh and Luca Stolz making use of an early stop to clear Preining for finish eighth.

Maro Engel completed the points finishers in tenth aboard the repaired Gruppe M Mercedes, after jumping Philipp Eng’s Schubert BMW in the pits and completing a well-executed double pass on Ricardo Feller (who retired after contact with David Schumacher and then touching the wall which damaged his suspension) and Sheldon van der Linde.

The South African eventually finished 15th, and now trails Bortolotti by eight points after also failing to finish race one when he was an innocent victim in the first corner pileup.