Mercedes veteran Gary Paffett has become DTM champion for the second time, after finishing third in the final race of the season at Hockenheim

While 2017 champion Rene Rast soared to a sixth successive victory in his Audi, Paffett had a nervy race knowing that a top-four position would be good enough to secure the title.

Rast got a great start to slip inside poleman Marco Wittmann's BMW at Turn 1 and, other than Wittmann having a few glances at taking the lead half a dozen laps in, he was never really threatened thereafter.

Paffett fell away from the leading duo in third place, and was the first of the top trio to make his mandatory pitstop.

With Mercedes struggling for long-race pace on its tyres this weekend compared to the other two manufacturers, Paffett's biggest worry would be any Audis that might come on strong late in the race. 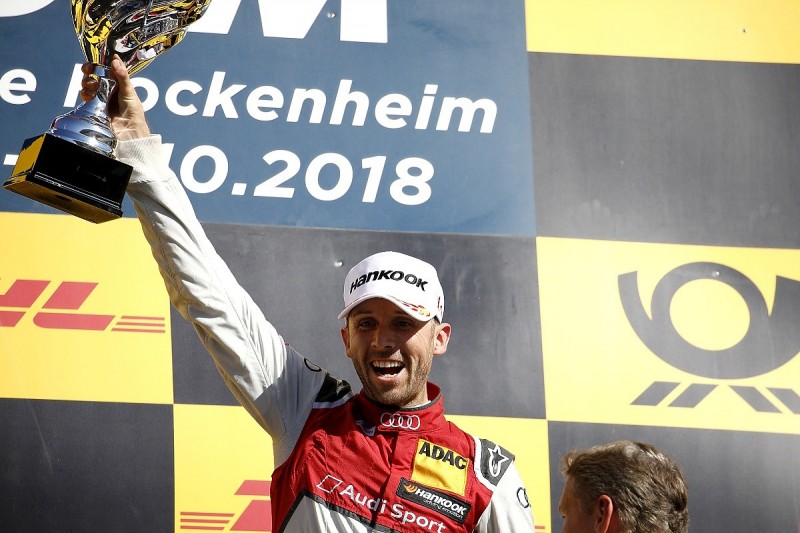 Rast appeared to have little back-up at the start of the race, with Nico Muller the next-best Audi driver on the grid in ninth.

But Muller got up to seventh straight away, and he and back-of-the-grid starter Robin Frijns made late pitstops deep into the second half of the race.

The duo charged up the order through a flotilla of BMWs and wilting Mercedes, with Muller making it into fourth place with just over three laps remaining, and Frijns getting up to fifth on the penultimate lap.

Paffett had just enough in hand, beating the storming Muller to third place by 1.4 seconds, with Frijns a further 1.7s back in fifth.

The remainder of the top 10 was all-BMW, with Bruno Spengler claiming sixth from Augusto Farfus, Philipp Eng, Joel Eriksson and Timo Glock.

Paul di Resta, who held second in the points going into the race, never held a hope of the title in his Mercedes.

The Scot charged from 11th to eighth on the first lap, but was told by stewards to give his place back to Eng, which meant he also had to let Eriksson - who he had also passed - ahead too.

Di Resta was the first to stop, and had a panel-rubbing incident with Eng in the second half of the race as he faded, in common with the other Mercedes.

Long behind Paffett, Edoardo Mortara was the next-highest Merc in 13th place, with di Resta 14th.