One-time DTM champion Paul di Resta says his R-Motorsport Aston Martin squad is able to excel on its strategic decisions because of the new manufacturer's current level of performance.

Di Resta has scored points at both Hockenheim and Zolder to contribute over three-quarters of the R-Motorsport squad's current total.

At Zolder, di Resta made a first lap pitstop that meant he could use a later safety car period to make a free stop and use fresher tyres to climb from 16th on the grid to eighth at the flag.

The late build of the Vantages has meant Aston has had to overcome a straightline speed deficit, averaging 6kph down on Audi and BMW in the speedtraps at Zolder, as well as carefully manage its supply of spare parts.

Its drivers have however praised its overall balance and R-Motorsport brought what di Resta described as "small updates" for areas of development such as software to Zolder.

"We've been lucky as well, we've maximised and taken everything we could with the package we have.

"I guess we can be a bit more black-and-white in that sense, you throw your eggs in one basket and go for it.

"There's reasoning behind it and it's paid off. We're not going to be championship contenders this year, nowhere near. That's a bit of a shame.

"But as long as we're going forward and getting closer to the top 10 regularly and on a regular basis then that's what we can focus on." 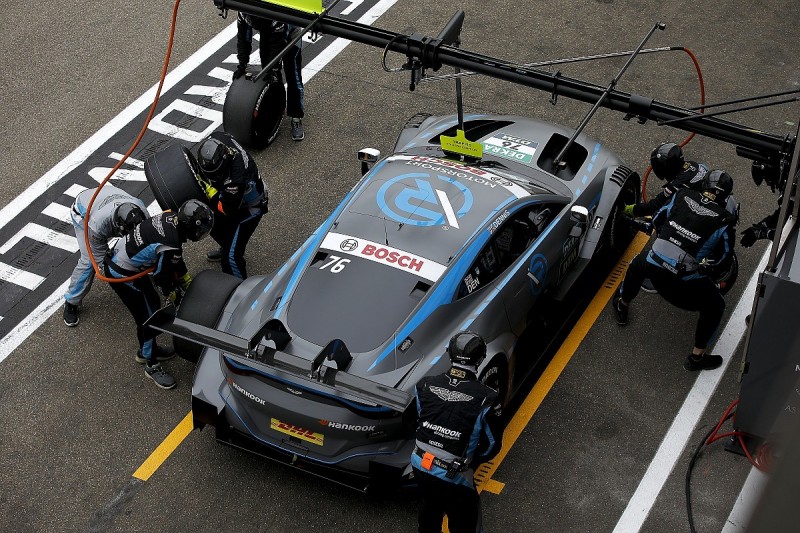 At Zolder, R-Motorsport tended to split its strategy 50/50 with two drivers opting for early stops while the other two ran later in the hopes of a safety car intervention.

But that strategy was impacted by reliability.

Di Resta was unable to start race two after an oil pressure problem in Sunday qualifying.

The two cars of Jake Dennis and Daniel Juncadella retired and caused the race one safety car that boosted di Resta's points return on Saturday.

"The other guys [Juncadella, Dennis and Ferdinand Habsburg] are doing a good job, as are the other manufacturers," said Di Resta.

"We'll quietly try and come away [and improve]. I'd say we're at least a year away, maybe more on development on the engine side of things, hardware."

Aston Martin entered the DTM in partnership with R-Motorsport, in a venture that includes HWA and Vynamic, as opposed to the full manufacturer support Audi and BMW brings to the series.

"If you look at the resource and budget [of the other manufacturers] they've had to do it, it's very different," said di Resta.

"We've got a great programme and an opportunity to shine. That's what we'll try and do.

"I believe in the project, we're further away than we thought we'd be, that's no secret."