Lucas Auer says his restart in the DTM’s second Imola race was more responsible for earning Mercedes’ best result of the weekend in fourth than its improved Balance of Performance.

The Winward Racing driver only missed out on a podium on Sunday when he was passed on the final lap by Marco Wittmann’s BMW, which marked a dramatic turnaround from Saturday’s race when Maro Engel in the best-placed Mercedes-AMG GT3 only finished tenth.

All Mercedes drivers had been given a 20kg weight deduction prior to the opening race, after Auer had topped the AMG contingent in qualifying in ninth, but the limited passing opportunities around the Imola circuit meant this had limited effect and the Austrian retired while running outside the points due to fading brakes.

The BoP was adjusted again prior to qualifying on Sunday, with 25kg added to the Audi and Lamborghini cars, as Engel’s Gruppe M car earned fourth on the grid.

Auer qualified four places further back, but moved into contention following a rapid safety car restart that sprung him ahead of Engel, Luca Stolz and Wittmann. He then ran side-by-side with Felipe Fraga’s Ferrari into Tamburello, the early race leader cutting a right-rear tyre in subsequent contact and having to retire.

Speaking to Autosport after the race, where he apologised to his team for the “shitty mistake” that allowed Wittmann through, Auer rejected suggestions that the BoP tweak had made much difference.

“For me to be honest it was more my restart which made our day,” said the Portimao winner, who was allowed past Mirko Bortolotti under the safety car after the Italian had been released into his path exiting his pit box and made contact with the Mercedes.

“They were sleeping, no really, and this made our race. 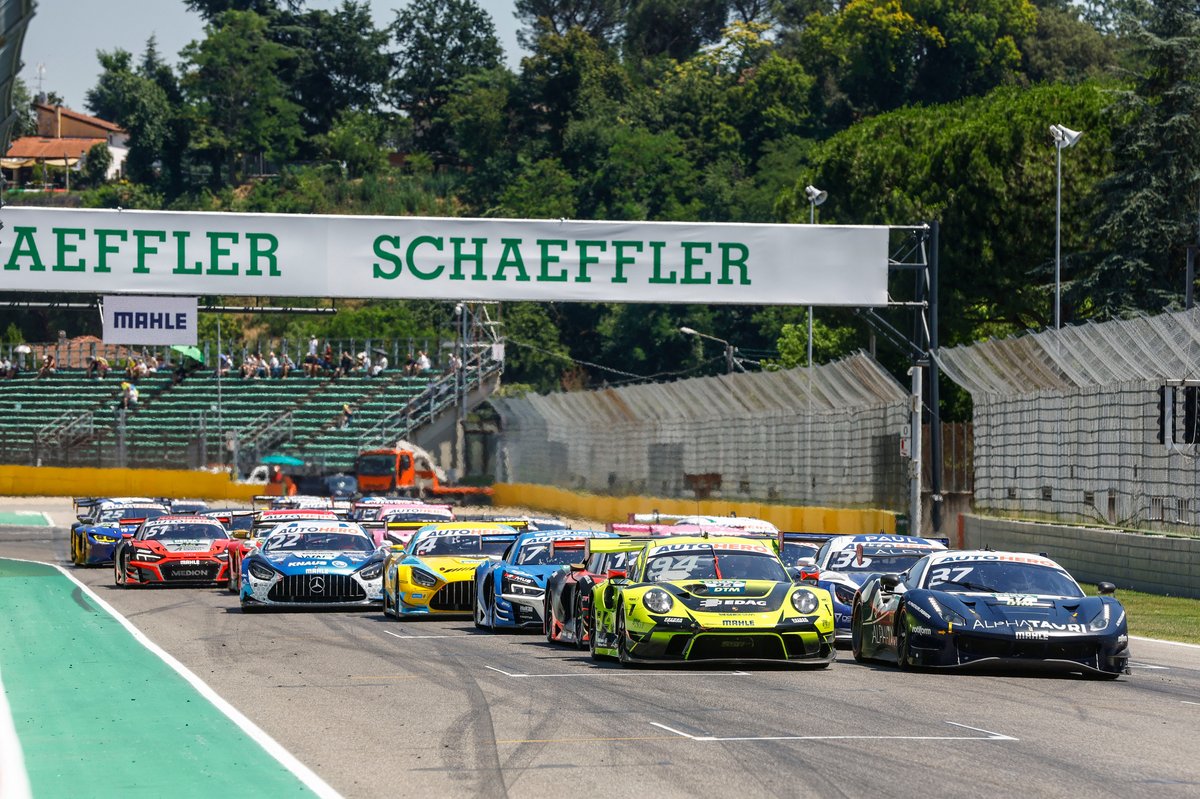 Auer (22), made a rapid restart to hold third for most of the race after the yet-to-stop Cassidy and Olsen came in

Engel continued his record of scoring in every race, one of only three drivers to have done so along with championship leader Sheldon van der Linde and Borolotti, but slipped back to seventh by the end.

He told Autosport that Imola “has been the weekend where the BoP was the furthest off”.

“We tried to communicate pre-event that we thought it was wrong and it was a bit frustrating to be so far off [on Saturday] to prove that we were obviously disadvantaged,” he said after the early safety car scuppered his strategy of starting on new rubber and a “messy restart” cost him track position.

“Credit to the ITR, they reacted. But seeing the result, it probably wasn’t enough.”

Auer’s team-mate Maximilian Gotz also made the points in ninth, while lead HRT Mercedes driver Luca Stolz missed out in 12th after being passed by the defending champion in a three-wide moment with Nico Muller’s Rosberg Audi.

HRT boss Ulrich Fritz was magnanimous about the Silver Arrows’ fortunes in Italy, telling Autosport: “I think this is a classical point of how close DTM is.

“[Auer] was successful with his restart and his restart more or less gave him the position he was in.

“But if you look at the end of the race where the BMWs were pushing him like crazy, it was for sure not the greatest BoP for us.

“However, we know that it’s a BoP sport and we have to live with it. Sometimes you lose and sometimes you are on the winner’s side.

“Here we have definitely not been on the winner’s side, but we just need to keep our head down and do the best out of it for the next races.”