Audi driver Rene Rast took over the DTM championship lead from Nico Muller after cruising to victory in the third of four races at Zolder.

At the start, poleman Rast pulled away cleanly to lead into Turn 1, with the impressive Ferdinand Habsburg retaining his second position ahead of Robin Frijns.

There was chaos in the middle of the pack as Harrison Newey tagged Muller after overtaking him into Turn 2, unsettling the Abt Audi driver and dropping him down to 14th in the 16-car field.

A safety car was deployed soon after to retrieve debris from track, but the race went back under green on lap three.

While Rast managed to build a one-second lead out front, Frijns slowly started closing in on Habsburg and passed the WRT Audi driver at Turn 5 before they both dived into the pits on lap 11.

Rast stopped a lap later and returned on track with an extended advantage of two seconds, but soon found his lead under threat from a charging Frijns, who brought the gap down to 0.5s.

However, on lap 20, Frijns missed the apex at Turn 2 and lost momentum going into the long straight after Turn 4, giving Rast the breathing space he needed to stay in the lead.

Frijns closed the gap back under 1.5s seconds on the final lap, but that proved to be too late to prevent Rast from claiming the points lead with his third successive victory at Zolder.

Behind the leading duo, Habsburg delivered his first DTM podium after successfully fending off the top BMW of former wrt man Jonathan Aberdein in the latter stages. 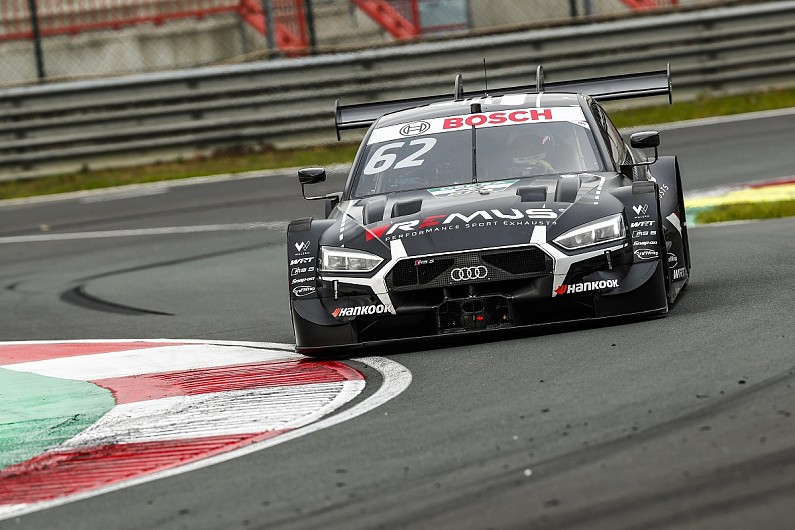 After his coming-together with Newey on lap 1, Muller jumped back to 12th at the restart before gaining further positions by stopping early on lap five.

The Swiss driver recovered to sixth place by the time the pitstops were settled, but he couldn't clear Fabio Scherer's WRT machine and had to settle for his second-worst result of the season.

This means he has now dropped to second in the standings, 10 points behind Rast, although he remains five points ahead of teammate Frijns with three races still to run.

Newey finished less than a second behind Muller in seventh, and ahead of the second-highest BMW of Timo Glock.

DTM stalwart Jamie Green bagged two championship points in ninth despite being tagged into a spin by Philipp Eng at the Turn 5 chicane on lap 11 - an offence for which the BMW driver was hit with a drive through penalty.