Frijns got the holeshot from second on the grid to take the lead into Turn 1, while polesitter Rene Rast fought off separate attacks from Muller and BMW's Marco Wittmann to hold second position.

Frijns had managed to build a lead of over a second already when the safety car was deployed for the first time to recover debris from the final corner after a double contact between Loic Duval and Timo Glock.

The safety car peeled into the pits after just two laps, with Frijns doing enough to hold the lead from Rast. However, Muller got sandwiched by the BMWs of Marco Wittmann and Philipp Eng and was then unlucky to be hit by Audi stablemate Jamie Green, the contact pitching him into a spin and dropping him to the rear of the pack.

At the front, Frijns extended his advantage over Rast, with Eng and Wittmann running in third and fourth for BMW.

On lap 16 the safety car had to be called again after Duval locked the wheels of his Audi going into Turn 5 and headed straight into the barriers, although he was able to rejoin the race.

The safety car intervention gave all leading drivers the opportunity to complete their pitstops, with Wittmann jumping one place ahead of Eng, who had stopped just prior to Duval's crash on lap 15.

Muller was also a big beneficiary from the incident and moved up to sixth, having made his stop early on lap 8 and run in clear air thereafter. 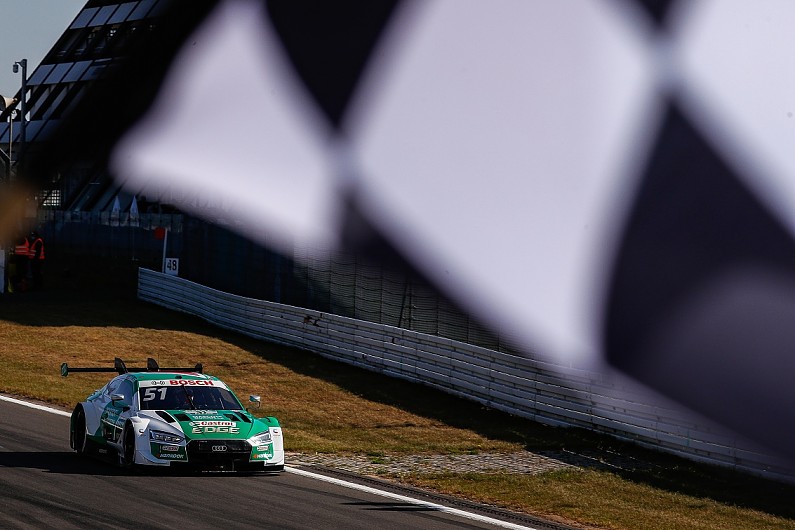 At the restart, Frijns again managed to hold onto the lead, while Wittmann went around the outside of Rast into Turn 2 to complete a brilliant move for second position.

The racing had barely resumed when the third safety car had to be deployed a third time after WRT driver Fabio Scherer was launched into the path of a lapped Duval after hitting the BMW of Lucas Auer.

Both the Audis of Scherer and Duval took heavy impact in the incident and retired from the race, leaving 14 cars for the sprint to the finish.

Frijns made his characteristically quick getaway at the restart to stay ahead, while Rast managed to snatch back second position from Wittmann after diving down the inside of the BMW driver into Turn 1.

Rast closed the gap to 0.5s in the final few laps of the race, but that wasn't enough to prevent Frijns from securing his third victory of the season.

Muller eventually crossed the line in fifth in what was a race of damage limitation for the championship leader following his early spin at the first restart.

Jonathan Aberdein was classified sixth for BMW, while Ferdinand Habsburg again finished as the top WRT Audi driver in seventh.

Formula 1 convert Robert Kubica (ART BMW) was last of the classified finishers after being hit with a drivethrough penalty for not following the correct restart procedure.

Following the first of the two Nurburgring races, Frijns has slashed Muller's lead to just 13 points, with Rast sitting a further 23 points behind in third.