Timo Glock says he gave Lucas Auer a "free pass" on the last lap at the Lausitzring to ensure BMW scored its first victory of the 2020 DTM season.

Auer led a BMW 1-2 in the second of the two races around the Lausitzring's grand prix layout on Sunday, ending a five-race winning streak for Audi since the start of the new campaign.

Both Glock and Auer had got the jump on the leading Audi trio of Robin Frijns, Rene Rast and Nico Muller by stopping early on lap 10 of 32, and were on their way to finishing first and second in that order heading into the final lap.

However, Auer pulled across to the inside line under braking into Turn 1, passing Glock to seal his fifth victory in the DTM and first since joining BMW in 2020.

Speaking after the race, Glock said he did not put up a fight with Auer because he felt that any attempt at defending his position would have allowed the Audi drivers to pass both of them and snatch the lead.

"I would say we won the race together today for BMW," Glock said. "These are the right words I would say.

"I came out of corner 10 and there was this piece of rubber in front of me and I just saw it and I just understeered into that piece of rubber, collected the pick-up on the front right and it was game over for me.

"So I had a massive amount of pick-up on the front, a lot of vibration and Lucas came close again.

"Then I saw at the start/finish [that the race] was going to be one or two more laps and my goal was just to get out of the last corner as quick as possible. And it didn't work, the tyres were gone. 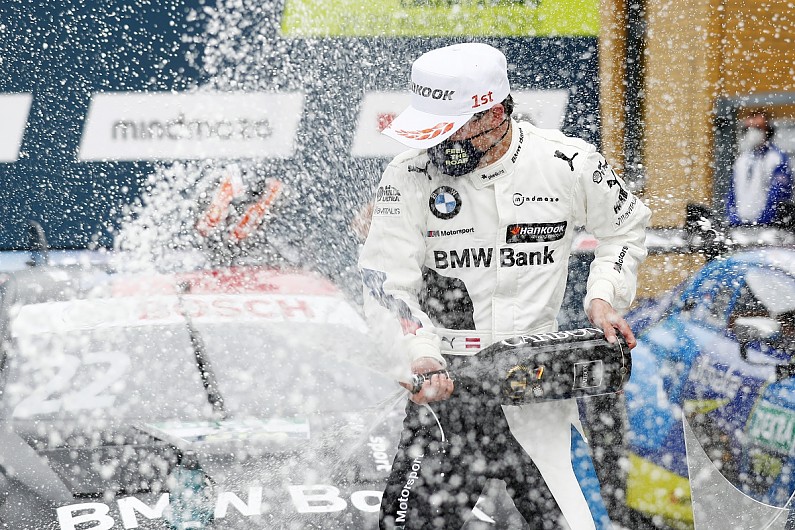 "All the way from the last corner to Turn 1, I was like, 'do I really defend now proper and we fight for the win and then get eaten up by the Audis?'.

"It's two sides: 'Do you defend [and] you win or do you think about the bigger picture?'

"And today it was about the bigger picture to get the win back for BMW.

"I gave Lucas, let's say, the free pass and I decided to defend and back the guys up. And I think it was the right decision."

Auer did not agree with Glock's suggestion that he was gifted the victory, saying he strategically sat behind his BMW stablemate until the final lap to ensure he had the tyre advantage to seal the move.

The pair had already traded places once before in the race, with Glock repassing Auer to take the lead.

"No, it would be wrong [to suggest that]," Auer said. "Of course I fought for the win, proper hard because I still overtook Timo once, he overtook me back.

"Then I decided 'you know what, this is not good for us'.

"I drive behind Timo, I try still somehow to keep my tyres alive and if something happened in the end, which worked out.

"But at one stage I said, 'If we overtake each other every lap, it's not good'. So I saved everything I had in terms of the [overtaking] systems we have for the last lap. And it worked out for me."