Lucas Auer delivered BMW's first victory of the 2020 DTM season in a thrilling finish at the Lausitzring after overtaking Timo Glock on the final lap of the race.

The second race of the Lausitzring weekend had appeared to be an all-Audi affair, with polesitter Robin Frijns leading early on from race one winner Rene Rast and Nico Muller.

Rast made a DRS-assisted move on Frijns on lap 4 to take the lead, only for Frijns to reinstate the status quo shortly afterwards by repeating the move into Turn 1.

Meanwhile, a number of drivers led by Jamie Green - who had been running fourth behind the leading trio - completed their mandatory pitstops in the first 11 laps, and started recording lap times that were almost two seconds quicker than the leaders.

However, Frijns, Rast and Muller preferred not to react to the possibility of being undercut, waiting until the mid-point of the race to dive into the pits.

Rast was the first to pit on lap 17, with Muller and Frijns following the reigning champion a lap and two laps later respectively.

Rast took advantage of his earlier pitstop to gain track position over Muller and Frijns, but the trio were left firmly in the midfield, behind the six drivers who had stopped in the first 11 laps.

The trio should have found it easy to clear the traffic ahead given their tyre advantage, but none could pass Audi stablemate Green, who briefly led after the pitstops but dropped to third behind BMW duo Glock and Auer. 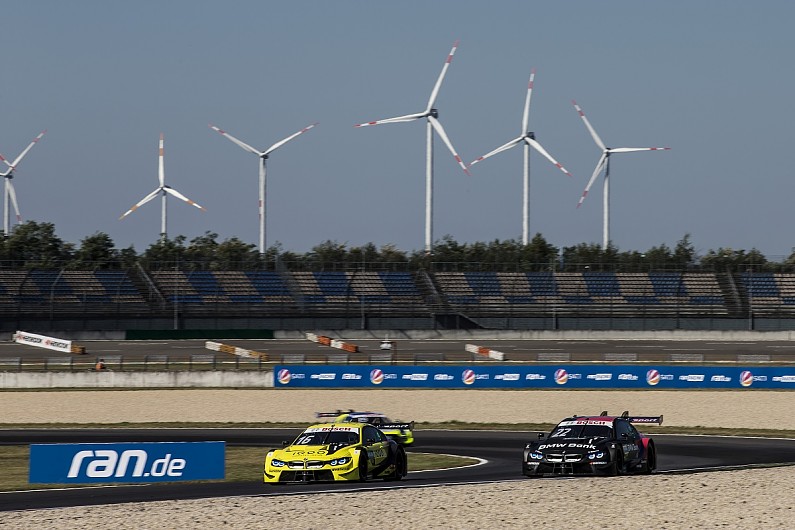 Glock and Auer both pitted on lap 10 and overtook Green on lap 24, before indulging in a battle of their own.

The two BMW drivers traded the lead twice before Glock asserted his position over Auer, seemingly on his way to a first DTM win since 2018.

However, Auer pounced on the final lap to outbrake the ex-Formula1 driver into Turn 1 at the start of the final lap - and made the move stick to clinch his fifth victory in the category and his first with BMW.

After losing out to Auer, Glock came under pressure from Green for second, but the Team Rosberg driver had to turn his attention to Frijns, who had managed to clear both Muller and Green with the advantage of fresher tyres.

Frijns got a better exit out of the final corner and managed to just pip Green by just 0.2s to claim the final spot on the podium.

Behind, Muller and Rast crossed the line virtually side by side in a repeat of last weekend's second race at the sprint layout, but it was Muller who emerged on top by a tiny margin of 0.009s.

Jonathan Aberdein finished seventh ahead of Audi's Loic Duval and BMW stablemate Marco Wittmann, who slipped down the order in the second half of the race, having run inside the top five before the first pitstops.

Sheldon van der Linde completed a stunning recovery drive after stalling on the grid, claiming the final championship point in 10th - albeit five seconds behind the leading train of cars.

ART BMW's Robert Kubica qualified a season-best 11th and ran inside the points early on, but finished the race in last place.