Audi star Rene Rast held off a charging Nico Muller on the final lap to win the second DTM race at the Lausitzring by a tiny margin of 0.089s.

Rast made a brilliant launch from third on the grid to challenge polesitter Robin Frijns into Turn 1, but ran off track and settled behind his Audi stablemate in second, as Muller dropped to fourth from the front row.

However, reigning champion Rast didn't wait long before making another move, diving down the inside of Frijns at the same corner two laps later to take the lead.

The two Audi drivers battled for position for one last time after the pitstops, after Frijns successfully managed to undercut Rast to move himself back into the lead.

Frijns initially appeared to have done enough after building a 2.5s gap up front, only for Rast to rapidly close in on him and snatch the top spot on lap 25.

Muller, meanwhile, took an inspired decision to wait until lap 20 to make his mandatory pitstop, which initially dropped him to sixth but would later propel him into contention.

Once his tyres were up to temperature, Muller started clearing cars in rapid succession - passing Wittmann on lap 34 to move into a podium position.

Two laps later he dispatched a struggling Frijns for second and then started chasing Rast, the 33-year-old sitting comfortably out front with an advantage of 3s.

Muller brought the deficit down to under 1s on the penultimate lap but failed to sufficiently close in enough to make a move into Turn 1, the de facto overtaking point at the Lausitzring. 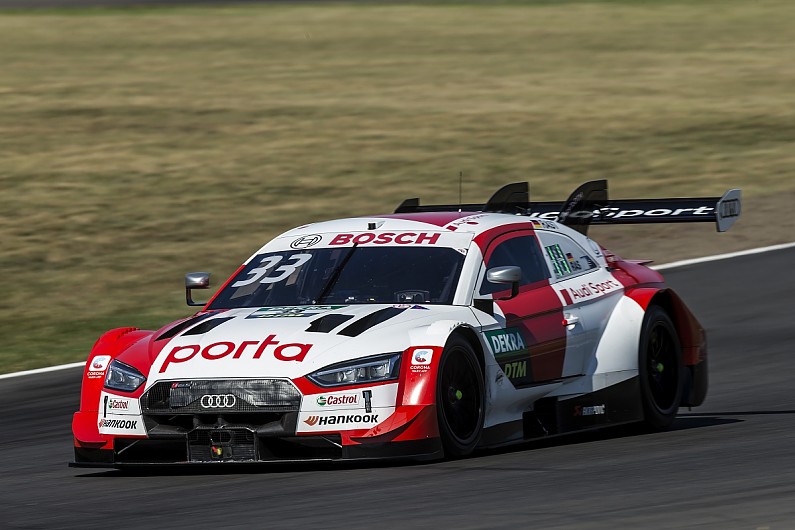 He also appeared too far behind Rast on the final corner, but a great exit allowed Muller to run virtually side-by-side onto the finish line, falling short of victory by less than 0.1s.

The result marked Rast's first win of the year after he was stripped of his first-place finish at Spa due to a push-to-pass infringement.

Wittmann passed Frijns later on in the race to finish third and ensure a second podium for BMW in as many races after a disappointing season opener in Belgium.

Audi's Mike Rockenfeller was the last driver to pit on lap 21, with the strategic decision allowing him to climb up to fifth, ahead of the BMW pair of Timo Glock and Philipp Eng.

Loic Duval had a difficult race to finish lowest among the factory Audi crew in eighth, while BMW's Jonathan Aberdein and WRT Audi's Ferdinand Habsburg completed the top 10 - the latter dropping down the order after qualifying a strong fourth in his customer RS5.

Jamie Green was the only driver to retire from the race, the DTM veteran's Audi stopping on lap 37 with mechanical troubles.

Robert Kubica bagged another 13th place finish in the ART-run BMW, ahead of the factory M4s of Lucas Auer and Sheldon van der Linde.