Cassidy, who had earlier sealed pole position and described it as a response to a difficult Hockenheim DTM weekend last month, dominated the majority of the race and held a lead of over five seconds.

That lead was then erased when Dakai Sasaki stopped his Impul Nissan on the start/finish line inside the final 10 minutes, prompting a three-minute dash to the flag following a safety car.

But Cassidy held on to take victory by less than half a second ahead of Koudai Tsukakoshi in the Keihin Honda NSX and 2018 Super GT champion Naoki Yamamoto.

The top three largely locked down their positions following the early phases of the race, with Yamamoto repassing the Nissan GT-R of Ronnie Quintarelli after the four-time Super GT champion jumped him into the first corner at the start.

Quintarelli had started third but soon fell away after Tsukakoshi also got by the Nissan driver.

The Nissan driver was then embroiled in a thrilling race-long battle between multiple drivers fighting for the fringes of the top 10.

Current Super GT champion Kenta Yamashita was one of those involved, though he moved clear after an impressive opening lap lifted him from 11th to eighth, and later charging to fourth.

Sho Tsuboi only just held onto fifth at the finish ahead of the leading DTM runner of Benoit Treluyer as the pair battled across the final lap alongside the Lexus of Yuhi Sekiguchi. 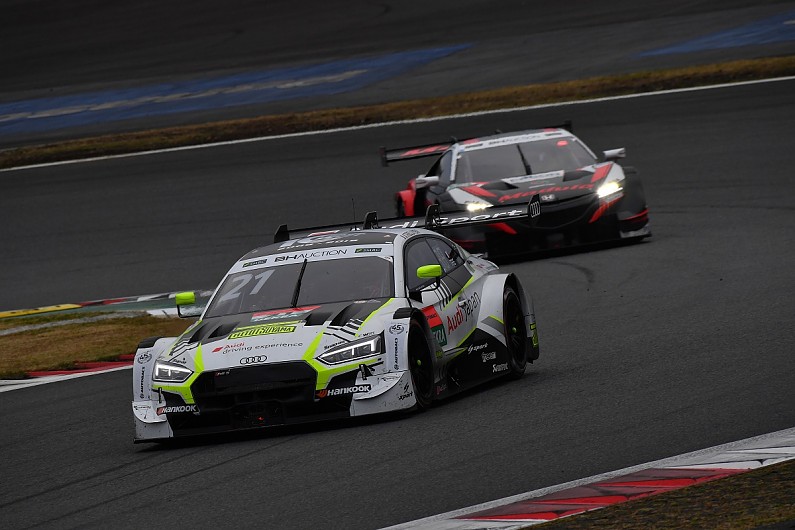 While the DTM cars were noticeably slower through the fast sections in the drier conditions, Treluyer stopped later than anyone else in the field and used his fresh Hankook rubber to take sixth after restarting outside the top 10.

But Rast would end up ninth behind Sekiguchi, with the top 10 rounded out by the Mugen Honda of Hideki Mutoh.

Mike Rockenfeller had looked to be the DTM driver to beat as he ran fourth early on, but he progressively slipped down the field, and was also tipped into a spin by Treluyer.

Marco Wittmann was a disappointing lapped 14th after his RBM team opted to start him on wet tyres as the circuit dried ahead of the race, with Audi making a late, and ultimaely correct, decision to go to slicks.

Audi's Loic Duval failed to take up his front-row starting position after he crashed on his installation lap at Dunlop corner.

Duval lost control while warming up his tyres, skating into the outside barrier and picking up front-left suspension and bodywork damage.

Fellow DTM runner Alex Zanardi only just made the start after BMW was forced to fix an issue pre-race. He later retired with an engine problem.