Audi talisman Rene Rast benefited from an inspired two-stop strategy to take victory from near the back of the grid in the second race of the DTM opener at Hockenheim.

Team Rosberg made the call after what had ostensibly appeared to be a disastrous seventh lap for Audi, when Mike Rockenfeller slowed with technical problems and Loic Duval ploughed into the gravel trap at Sachskurve.

As it transpired, the race's complexion completely changed at this point, with Rast called in for a fresh set of tyres under the safety car that was scrambled so that Duval's Audi could be rescued.

Rast, who had made progress from 16th to 12th in the early going, resumed at the back of the field along with the R-Motorsport Aston Martin of Paul di Resta, who had got into the pits in the wake of the Duval incident but before the safety car was called.

Mandatory pitstops cannot be made in the DTM under the safety car, so while di Resta would be able to continue to the end of the 37-lap race, Rast would have to stop again.

In the meantime, Rast used his fresh rubber to burn through the pack. He was second within four laps of the restart, then on the following tour he rounded the BMW of poleman Philipp Eng at the Spitzkehre hairpin to move into the lead.

Audi appeared to have better long-run pace, and before the stops Eng dropped behind the RS5 of Robin Frijns, and was in the clutches of another Audi - that of Nico Muller - by the time they pitted together. 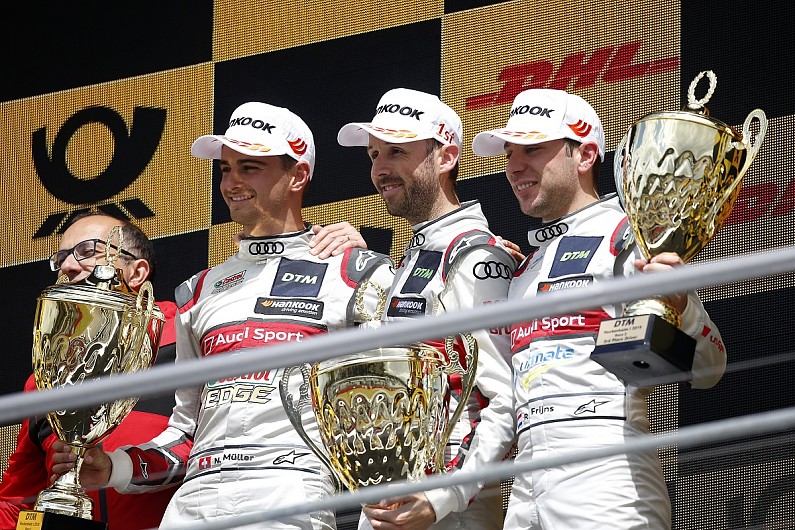 Rast left it three laps longer to take his second - and only mandatory - stop, while Frijns went one lap further still after an impressive stint on a single set of Hankooks.

On the first lap after his stop, Rast was 15.9s adrift of di Resta, who moved into the lead when Frijns went into the pits.

But the 2017 champion was making up 3s per lap on the Aston Martin, and di Resta finally gave up the task and elected instead to make a second stop.

That left Rast out front, 4.2s in front of Muller and on fresher tyres, and it was an untroubled run to the flag thereafter, with Rast winning by 12s.

After his late stop, Frijns stormed back up the field. He passed Eng for third with four laps remaining, and finished right on the bootlid of Muller to complete an Audi 1-2-3 and take his second podium of the weekend.

Both Glock and BMW team-mate Marco Wittmann ran in the top four in the early going, but were victims of the restart after the safety car. Glock was forced wide at Spitzkehre in the jostling, while Wittmann lost time in contact with Muller, and was then hit into a spin by Pietro Fittipaldi, for which the DTM debutant earned a drive-through penalty.

Each made relatively early stops, with Wittmann taking eighth on his ageing tyres.