With Peterhansel expected to be given back time for stopping to assist the biker after the incident, he could yet be given stage victory instead and potentially overtake Loeb for the rally lead.

The Chilecito-San Juan stage featured a 279-mile timed section, split by a 56-mile neutralised zone, and became the longest of the rally following the cancellation of Wednesday's Super Belen test.

Loeb started the day around two minutes up on Peterhansel, but lost most of that advantage at the first waypoint, only for Peterhansel to collide with KTM rider Simon Marcic shortly thereafter.

Marcic is believed to have fractured his leg in the incident, and Peterhansel stopped for around 10 minutes to help out the Slovenian rider before medical crews arrived.

But despite the time loss, the Frenchman was not far off Loeb on the timing screens during the first part of the stage, as Loeb dropped behind the third Peugeot of Cyril Despres.

After the neutralised zone, Loeb picked up the pace and overhauled Despres, finishing 2m33s ahead.

Peterhansel was almost seven minutes adrift in third, with the time he spent stopped for Marcic yet to be awarded back. 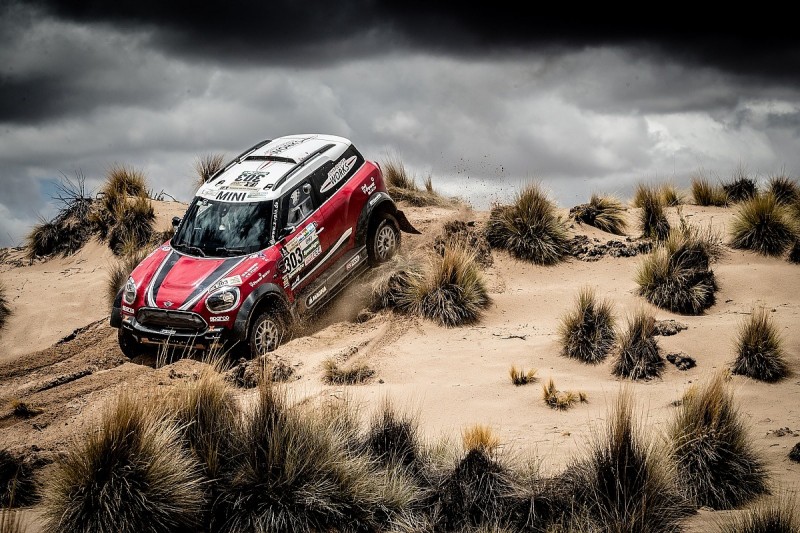 It was a largely miserable day for Peugeot's nearest remaining rivals, as Toyota's Nani Roma lost ground and X-raid Mini's Mikko Hirvonen had a collision with a truck.

Roma, who entered the day 24 minutes behind Loeb, gradually gave up half an hour throughout the day, dropping well adrift of the Peugeot 1-2-3.

The Toyota driver is currently safe in fourth, 55 minutes down on Loeb, as Hirvonen endured a nightmare stage.

The Finn had to stop for repairs after damaging the radiator of his Mini in a collision with a truck class competitor, and is set to lose over three hours.

Peterhansel given Dakar Rally lead back after collision with biker