Carlos Sainz has taken the lead of the 2018 Dakar Rally from Peugeot team-mate Stephane Peterhansel, becoming the first driver to claim back-to-back stage wins in the event's car category

Sainz recorded his first stage win of this year's Dakar in the Arequipa - La Paz test on Thursday, and picked up where he left off after a rest day in the Bolivian capital.

Opening the road on the 260-mile timed special, he arrived at the finish after four hours and 49 minutes, clinching a stage win that was made easier by dramas for team-mate Peterhansel.

The Frenchman, who had led the way by 27 minutes in the general classification before Saturday's stage, was almost three minutes up on Sainz after the first three waypoints before he hit a rock while trying to pass a competitor from the bike category.

Fellow Peugeot driver Cyril Despres assisted with repairs and the car eventually resumed the run, but only after it had lost more than an hour and a half.

Peterhansel finally completed the stage an hour and 48 minutes off Sainz's pace and slotted into third in the overall classification, between the Toyotas of Nasser Al-Attiyah and Giniel de Villiers. 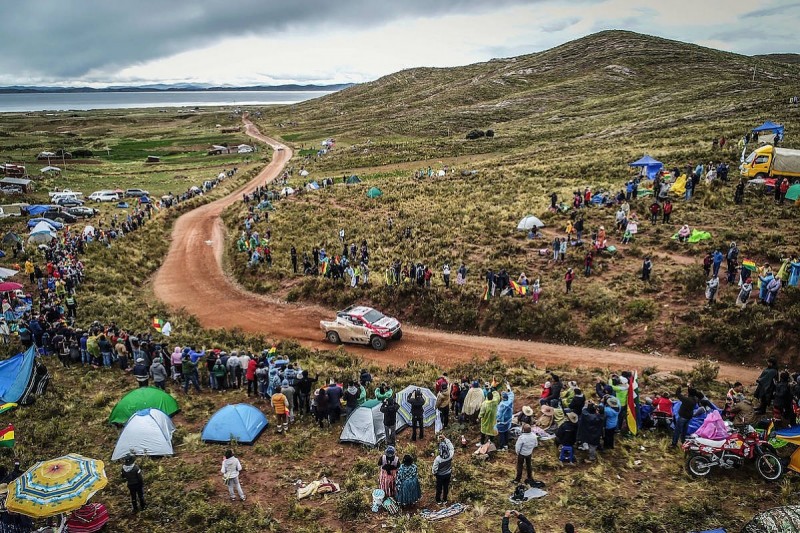 De Villiers (above) was runner-up on the stage, while Al-Attiyah was a close third.

With third Toyota driver Bernhard ten Brinke, who headed both de Villiers and Al-Attiyah overall before the start of the day, losing over half an hour, Al-Attiyah is now Toyota's highest-placed driver, more than an hour behind new leader Sainz.

"It's been a very hard rally, today's stage has also been tough, with a very complicated off-track section," Sainz said. "It's a matter of survival.

"There is still a lot of [the rally] left. For us now it is important to go day by day without problems.

"But there is so much that we have already seen, and there can be new surprises any day."

Sunday's itinerary will feature a 310-mile timed special en route to Uyuni, surpassing Saturday's run as the longest test of the 2018 event so far.

It will also mark the conclusion of the 'marathon stage', which deprived competitors of any technical assistance from their respective teams in the Uyuni bivouac.

Peterhansel was 'probably too fast' in crash that cost Dakar lead