Stephane Peterhansel has responded to the comments made by Nasser Al-Attiyah and believes the Toyota driver lost the 2021 Dakar Rally because he was too egoistic to win the Prologue.

X-raid Mini driver Peterhansel clinched a record-extending 14th Dakar title on Friday, beating Al-Attiyah by just under 15 minutes in what was effectively a two-horse race between the duo for victory.

It marked the fifth win for a buggy in Dakar in six years, with Al-Attiyah's 2019 triumph in a four-wheel drive Toyota Hilux in Peru the only exception.

The Qatari driver has been particularly vocal about the apparent advantage enjoyed by X-raid's John Works Cooper Buggy in recent years, and told Autosport earlier this week that he feels the rules are "too much in favour of the buggies" compared to 4x4 vehicles.

However, Peterhansel was unimpressed by Al-Attiyah's remarks, saying he lost the race as early as the 11km Prologue on 2 January.

The Toyota driver took a convincing victory in the 11km Prologue but that meant he had to open the road in Stage 1, giving an advantage to his rivals who started lower down the road.

Al-Attiyah lost 12 minutes as a result and was never able to fully recover from that setback, with navigational troubles and three punctures in Stage 9 effectively sealing the deal in Peterhansel's favour.

Asked to respond to Al-Attiyah's comments, Peterhansel said: "I don't want to comment on that, because they've been complaining for years.

"Us, when we don't win, we don't cry. It's just an ego thing. If he had a slightly different ego, he might have won the Dakar.

"His ego pushed him to the point where he wanted to win the Prologue, and I think that's when he lost the race."

Peterhansel won only one stage compared to five for Al-Attiyah but was by far the more consistent of the two, never losing more than five minutes to his main rivals on any given day.

The French driver has now won Dakar eight times in the cars category to add to his seven triumphs on motorcycles, the first of which was secured exactly 30 years ago with Yamaha.

Asked to reflect on his success, Peterhansel said: "It's always so much pressure, and that's what I always say every race is still very complicated to win.

"But in spite of all that, error is human, you can make mistakes quickly. So winning a 14th time was important, because it allowed me to be thirty years old between this victory and the first one in 1991.

"And I also think I'm the only one to have won on all three continents. Having lived through Africa, South America and now Saudi Arabia... we are still privileged.

"I think it's not just the experience, because when you see Edouard Boulanger, he has very little experience as a co-driver.

"It's the clear-sightedness, the analysis of the roadbook on the navigation side. And for my part, I tried not to get carried away when I felt I was a little slower." 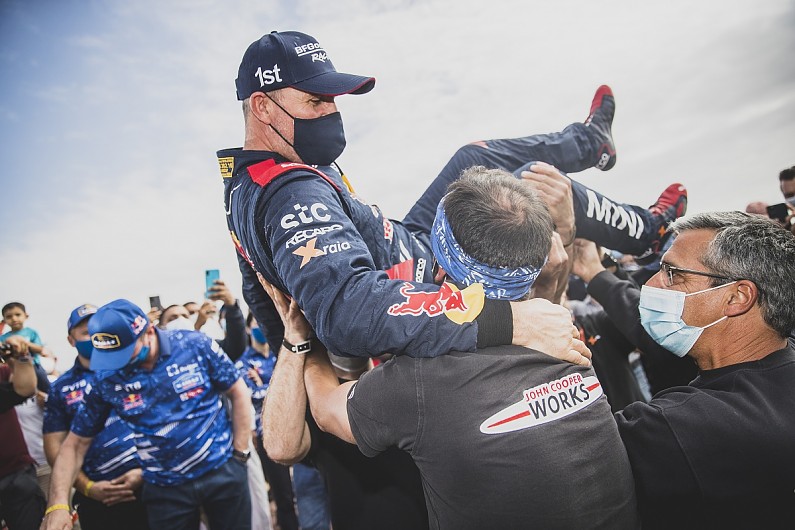