Loeb, contesting the rally in a PH Sport-run 2017-spec Peugeot 3008 DKR, gradually pulled clear over the 213 timed miles on the run between Pisco and San Juan de Marcona - only to nearly lose the stage win in the final stretch.

He ended up a mere eight seconds quicker than X-raid Mini driver Nani Roma, but held on to ensure that he has now recorded stage wins in all four Dakars he's contested.

Toyota driver Bernhard ten Brinke had emerged as Loeb's closest rival in the latter half of the lengthy timed run, but ultimately slipped behind Roma to finish a minute adrift in third. 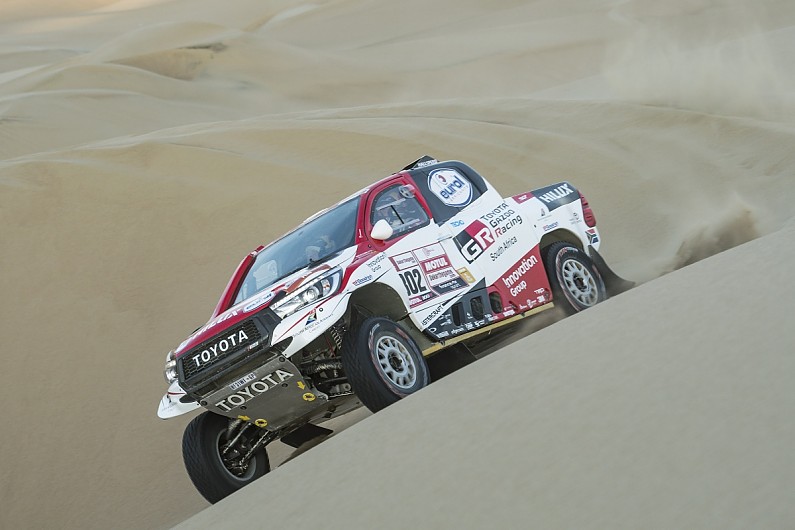 De Villiers now sits 28s clear of ten Brinke in a Toyota one-two overall. Roma and fellow Mini 4x4 contender Yazeed Al-Rajhi - fifth on the stage - are also within a minute of the outright leader, while Loeb trails de Villiers by 1m56s in fifth place.

Al-Attiyah, who opened the road having topping the first stage, had a tough time on Tuesday and dropped to eighth in the overall rankings.

Carlos Sainz Sr remains the highest-placed of the X-raid Mini buggies despite two punctures and a failure of the onboard tyre inflation/deflation controls. The Spaniard will head into the third stage sixth overall, he and Al-Attiyah split by Loeb's PH Sport team-mate Harry Hunt.

Peterhansel showed strong pace but was left to rue losing over a quarter of an hour to a stoppage around one-third of the way through the stage.

One of X-raid Mini's five 4x4 rally car entries will go no further than stage two, as five-time Dakar stage winner Orlando Terranova crashed out 111 miles into the stage.

The Argentinian, suffering from pain in his lower back following the incident, has been taken to a hospital in Ica by helicopter.