An electrical problem on his Honda Civic left the polesitter as a sitting duck over the closing stages.

The AmD Tuning driver had powered into an immediate lead early on. He was controlling the pace and keeping a 0.5 seconds gap to the pack behind when his machine started to fail.

He was forced to cede the lead to Andrew Jordan's victorious WSR BMW 330i M Sport, but Tordoff managed to hang on to track position to record a second place finish - his best result of the season to date.

He had to fend off a last-corner attack from Dan Cammish's factory Honda Civic Type R to seal the result.

"From quite early on in the race, I had a battery warning light come on," explained Tordoff.

"I turned off the headlights just to be on the safe side, and I switched off the in-car cooling fan too.

"I thought that had worked because the warning light went away, but it had been a concern." 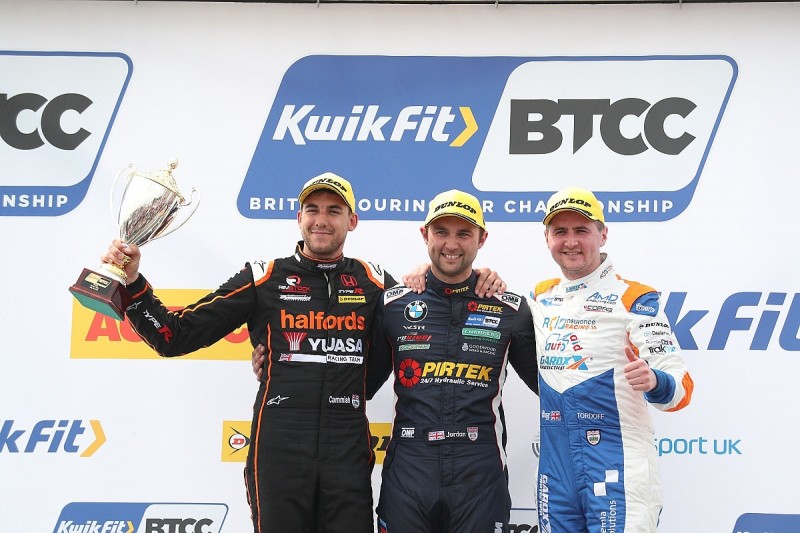 The concerns returned on lap 13 of 16, when the warning light switched on again and it led to more severe consequences.

"When it came on for the second time, it started affecting the power steering intermittently," explained Tordoff.

"I was trying to hang on, but that caught me out big time going through Church on lap 13 and I had a big moment.

"I managed to keep the car on the circuit, which was lucky, but that was enough for me to lose the lead.

"It is hugely frustrating, because without that, that was my race. I was comfortably in charge."

Tordoff will line up alongside Jordan on the front row for the second BTCC race of the Thruxton weekend later this afternoon.