The superior set-up of the Toyota Corolla in low-grip conditions allowed Ingram to climb three places and win by an eventual 4.3-second margin over polesitter Plato.

Speedworks driver Ingram lined up only fourth on the grid, but his strong getaway propelled him into third at Tom Oliphant's expense into Copse.

Two-time champion Plato, making his first start from pole since Knockhill in 2017, led by more than 1s at the end of the opening lap.

But a robust move through Brooklands on Neal promoted Ingram to second, and despite running on the less favoured medium-compound prime tyre, he posted the fastest lap of the early part of the race.

He closed to within 0.2s of Plato and then used a tighter route through Luffield and a stronger exit to hold the inside line.

Despite door-banging with Plato, Ingram consolidated first into Copse and then was never headed on his run to the flag. 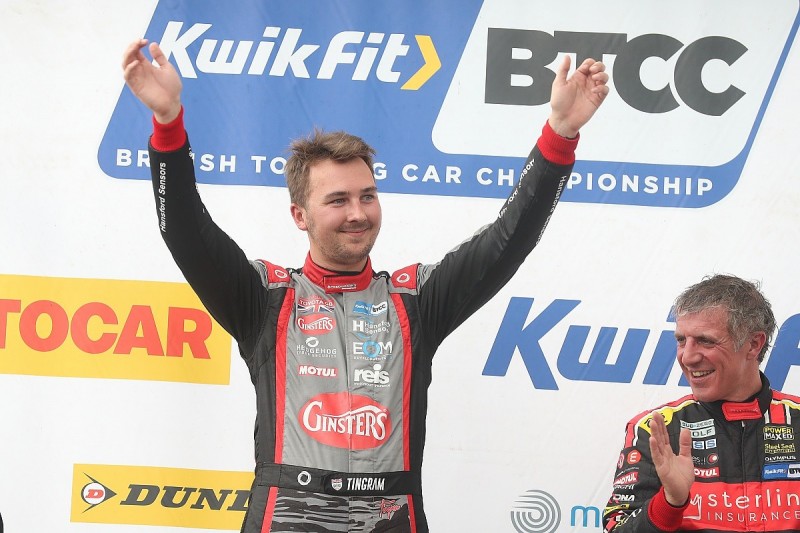 Points' leader Turkington had lined up sixth on the grid, some eight places higher than closest title rival and WSR team-mate Andrew Jordan.

But by lap sixth, Turkington had dropped to 11th before a climbing Jordan took track position.

As Turkington fell further back into the pack, he was caught in Rob Collard and Adam Morgan's battle, spinning on the run to the line.

He dropped as far as 25th, but did profit from late spinners to climb back into the points-paying positions with 14th.

Jordan meanwhile finished eighth on the road after a robust move on Chilton and a puncture for Ash Sutton.

But Jordan was then dealt a 6.6s penalty for the contact with the Motorbase Ford Focus RS, dropping him to 10th and back behind Chilton.

He now sits just six points shy of Turkington, with Cammish only five in arrears.

Cammish had lined up seventh but, like stablemate Neal, the Team Dynamics cars struggled in the damp and so Cammish fell to 11th.

With Neal's fall down the order, Smiley rounded out the podium ahead of team-mate Cook and the BMW 330i M Sport of Oliphant.

Neal was an eventual sixth ahead of Mike Bushell and Jordan, with Morgan and Chilton closing the top 10.