Toyota’s Rory Butcher recovered from initially losing the lead to win the first British Touring Car Championship race of the day at Silverstone.

Butcher’s pole position slot had been coated in oil and then water after a spillage in the preceding race, and he lost the advantage at the getaway to fellow front-row starter Tom Ingram.

But Butcher’s Speedworks Motorsport-run Corolla soon homed in on the bootlid of Ingram’s Excelr8 Motorsport Hyundai i30 N, and he dived into the lead at the Brooklands left-hander on the third lap.

With Butcher carrying just 9kg of success ballast, and Ingram on 39kg, the Scot began to pull away. By the seventh lap of 22 he had extended the gap to over one second, by lap 10 it was 2s, and it went as far as 3.821s with three laps remaining before he crossed the line 3.262s to the good.

“It’s just reward for the team’s hard work,” said Butcher. “They’ve given me such a fantastic car for the past few rounds, and it’s been a real pleasure to drive every single lap this weekend.

“I think I adjusted my start in anticipation of some wheelspin [on the dropped fluid], but overcooked it and ended up bogging down, but it was nice to make my way back into the lead.

“Tom’s a savvy driver, and his job today is to score points – I’m on a different mission, to make amends for what’s happened this season.”

Ingram, for his part, was convinced Butcher’s move came under yellow flags, which had flown for a first-lap tangle at Luffield that eliminated Gordon Shedden and the sister Toyota of Sam Smelt, but Butcher claimed to have checked twice to make sure.

Throughout the race Ingram resisted pressure from Dan Lloyd , who had a fantastic first lap to rise from fifth on the grid to third in his Power Maxed Racing Vauxhall Astra.

But no obvious gap appeared for Lloyd who was equally concerned with fending off the Laser Tools Racing Infiniti Q50 of Aiden Moffat, who had another good run with 27kg on board.

The places didn’t change, with Ingram heading Lloyd and Moffat across the line in close formation.
There was another three-way battle for fifth. Josh Cook in his BTC Racing Honda Civic Type R (on 48kg of ballast) had to defend from Colin Turkington’s West Surrey Racing-run BMW 330i M Sport (57kg) and championship leader Ash Sutton’s LTR Infiniti (75kg). 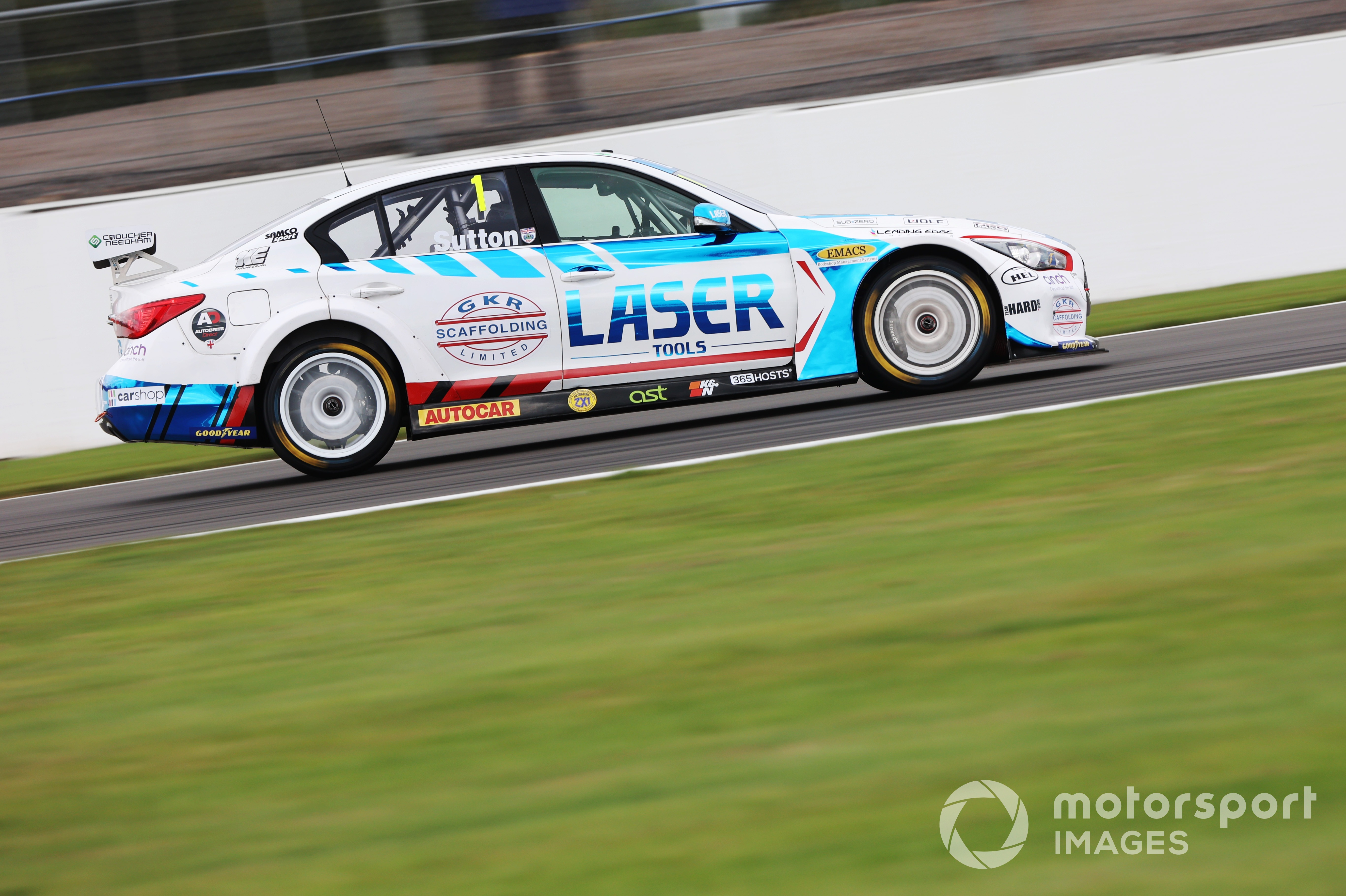 Sutton had lost a place from eighth on the grid on lap one, but made his way past Stephen Jelley’s WSR BMW at Becketts on lap four, then ran wide into Luffield on lap eight to mount a lovely cutback move on Dan Rowbottom’s Team Dynamics Honda, which he completed at Copse Corner.

Sutton set fastest lap and homed in on Cook and Turkington in front, but there was no way past.

While Rowbottom finished eighth, Jelley had to keep a wary eye on Jason Plato’s PMR Vauxhall, which completed the top 10, and the third WSR BMW of Tom Oliphant.

Title contender Jake Hill had a nightmare race with 66kg of ballast on his Motorbase-run MB Motorsport Ford Focus.

From 22nd on the grid, he got into the lower reaches of the top 20 before losing out in a muscular battle with Jack Butel and then having a half-spin at Copse with three laps to go that cost him two places, putting him back to 21st at the finish.

The Cosworth hybrid-equipped, Speedworks-run Toyota of Andrew Jordan started as intended from the pitlane, and showed much better pace than in qualifying to set the third fastest lap.