The Eurotech Honda driver made a storming start to surge from row two of the grid to lead by driving around the outside of Jason Plato's polesitting MG6 at the Deene Hairpin.

Jordan immediately began to pull away as Plato fought to fend off Gordon Shedden's Dynamics Honda around the first lap, while two separate incidents at Gracelands took out five cars in the midfield and meant the safety car was deployed for five laps while marshals cleared the wreckage.

Jordan aced the restart and rebuilt his lead as Plato defended again from Shedden while erstwhile points leader Matt Neal spun his Honda at Brook chicane just before the restart and tumbled from fifth to the back end of the order.

Reigning champion Shedden finally broke through Plato's defences exiting the Brook chicane on lap eight to take second, but he would not hold on.

Mat Jackson had already charged his Motorbase Focus up from 12th on the grid to sixth on the opening lap and was quickly past Plato too after the restart.

He grabbed second from Shedden when the Honda ran wide at Deene with five laps left and set off after Jordan, but he could not bridge the gap despite being quicker in the closing stages.

Rob Austin recovered from a poor opening lap to complete the podium. He fell from third on the grid to ninth on the first lap, but his Audi got stronger as the race wore on and he charged back through the order, outdragging Shedden's Honda out of the final corner to nick third spot on the line. 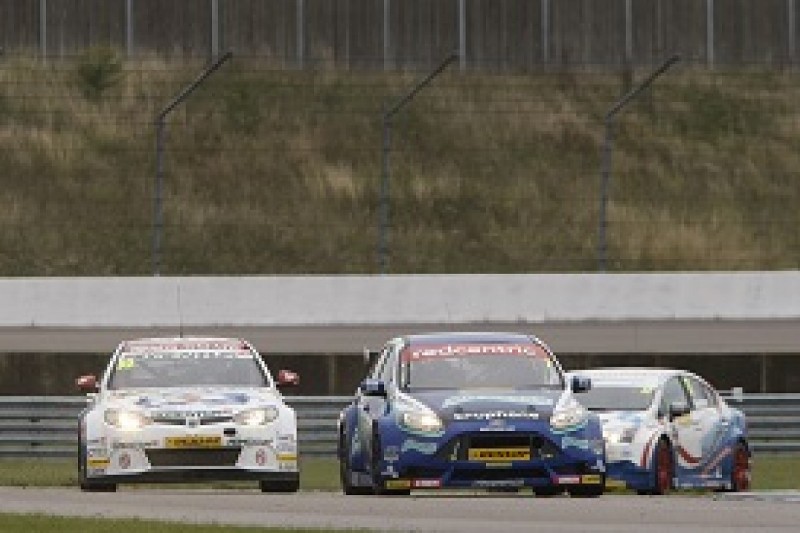 Plato's unwieldy MG held on to fifth, ahead of the WSR BMWs of Colin Turkington and Rob Collard, while the Speedworks Toyota of Dave Newsham just held off Jack Goff's Team HARD Vauxhall Insignia to finish eighth, with Frank Wrathall (Dynojet Toyota) and Nick Foster (WSR BMW) in tow.

Jack Sears Trophy leader Lea Wood's gamble on a green flag lap pitstop for slick tyres on his Vauxhall Vectra paid off. He overhauled the wet-shod Ford Focus of David Nye for S2000 class honours on the last lap.