Dan Rowbottom scored his first British Touring Car Championship victory in a dramatic Oulton Park opener that was interrupted by a red flag for a heavy crash.

After the mid-race stoppage, Rowbottom lined up alongside the sister Team Dynamics Honda Civic Type R of early leader Gordon Shedden on the front row, and got the jump on the three-time champion to lead the six-lap sprint to the flag.

The race was halted after a seventh-lap pile-up, precipitated when Jason Plato attempted to prise 13th place away from Tom Oliphant at Lodge Corner.

What tiny gap there was soon closed, and the Power Maxed Racing Vauxhall Astra of Plato hit the rear end of Oliphant’s West Surrey Racing-run BMW 330i M Sport and spun it around.

Oliphant spun backwards across the track into the path of Chris Smiley’s Excelr8 Motorsport Hyundai i30 N, who hit the rear end of the BMW heavily.

Rick Parfitt Jr came around the corner and locked up his Excelr8 Hyundai in a desperate attempt to avoid the stricken Oliphant, only to plough helplessly into the BMW’s driver-side door.

Oliphant emerged unhurt, and the WSR crew is working flat-out to repair the car for race two. Key to Rowbottom’s victory, which came with 27kg of success weight against the unballasted Honda of Shedden, was his two superb starts.

In the first, he went from fourth to second to sit behind Shedden, and was pursuing the Scot throughout the opening seven laps. 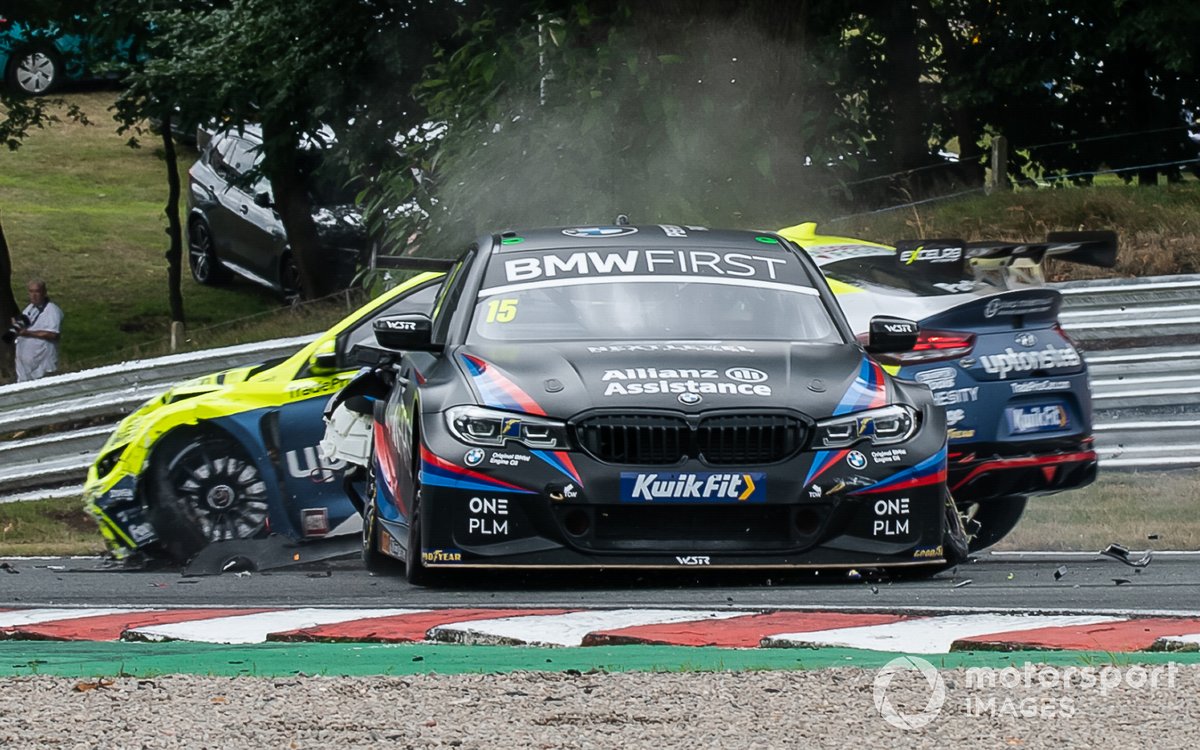 By the time of the red flag, Shedden was 1.3 seconds to the good and the race appeared to be in his pocket but Rowbottom was dynamite again off the restart – “My start felt OK,” said Shedden – enabling him to get in front.

Shedden crawled all over Rowbottom throughout the short sprint to the chequered flag, but was unable to force an opening.

“'Flash’ is a bit of a hunter, isn’t he?” said Rowbottom. “It’s not a nice car to have in your mirror, but I knew with two laps to go it was my race to lose.

“To get a second stab at the start was what we needed, because I couldn’t hang with him round the back in the first part.”

While the Dynamics Hondas used the soft option tyre, third-placed Adam Morgan kept his powder dry on the mediums on his way to third place in his Ciceley Motorsport BMW.

From sixth on the grid, he had an excellent first lap, shaking off the challenge of Rory Butcher’s Speedworks Motorsport-run Toyota Corolla and was third at the red flag before he shadowed the Hondas throughout the restart to complete the podium.

Butcher, who apart from Morgan was the only top-nine qualifier to use the medium tyre, finished fourth after fending off the WSR BMW of Stephen Jelley and Laser Tools Racing Infiniti Q50 of Aiden Moffat.

Butcher gained a reprieve at the red flag, as he had just been passed for fourth by polesitter Senna Proctor’s BTC Racing Honda, but gained the position back on countback. 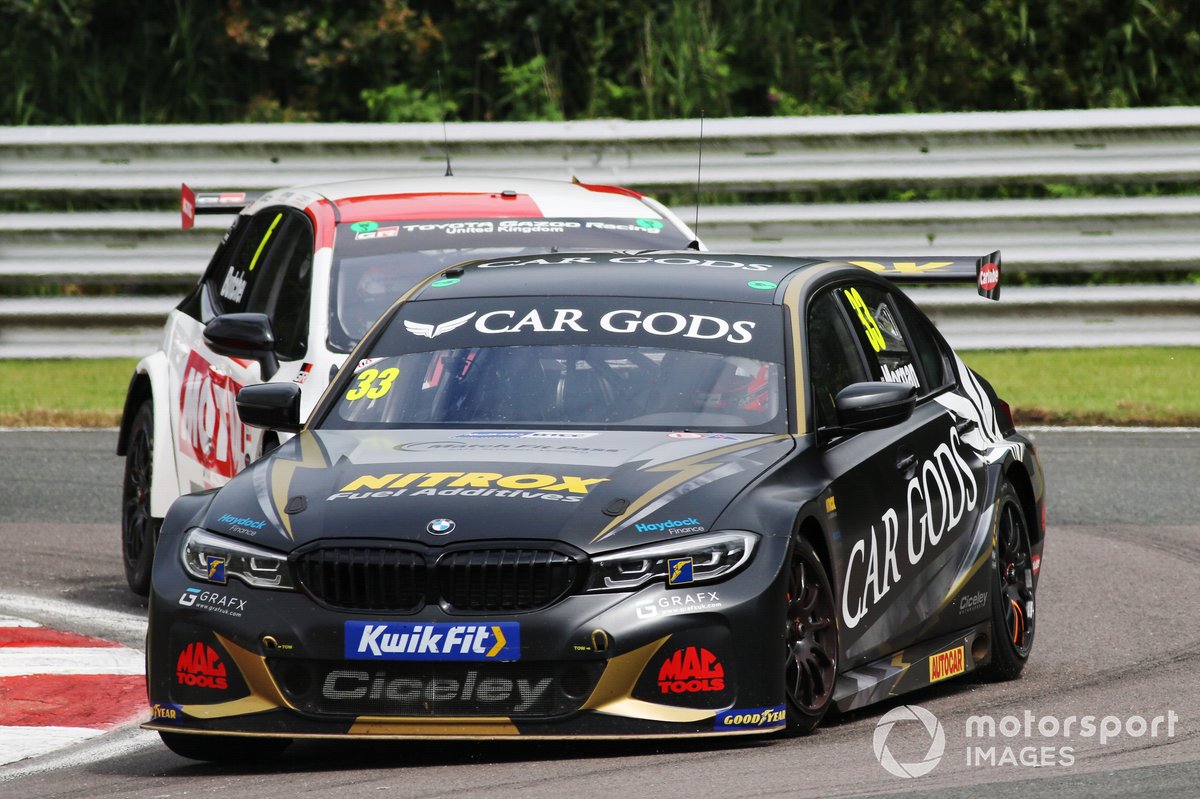 Proctor made a poor start at the initial getaway, and also lost a hatful of places on the first lap of the restart.
Plato finished seventh ahead of the Motorbase-run MB Motorsport Ford Focus of Jake Hill, who was carrying 39kg of ballast, and Proctor, with Jack Goff completing the top 10 in his Team Hard Cupra Leon.

It was a disastrous race for the top four in the championship. From the back of the grid, Tom Ingram had hauled his Excelr8 Hyundai into 14th on the grid for the restart, but lost out in the short sprint and finished 19th.

Ingram’s title hopes had taken a massive boost on the opening lap when a clash between Moffat and Colin Turkington put the four-time champion’s WSR BMW into a spin at Cascades, while Moffat’s LTR Infiniti team-mate, championship leader Ash Sutton, went off in avoidance.

Sutton took the restart last, following a trip to the pits to remove grass from the radiator, but charged through to finish 14th, with Turkington 18th.

Josh Cook, third in the standings in his BTC Honda, was hit with a 5s penalty for an out-of-position initial start, but claimed a point for 15th at the restart.