Toyota ace Rory Butcher was totally dominant in free practice for the British Touring Car Championship round at Silverstone.

Butcher, whose weekend last time out at Croft fell apart with engine failure in qualifying, finished up comfortably atop the times in the lead Speedworks Motorsport-run Corolla.

The Scot, who is running just 9kg of success ballast, left it until the dying moments of the misty opening session to demote the Excelr8 Motorsport Hyundai i30 N of Chris Smiley from the top of the times by 0.010 seconds.

But in the brighter and quicker second period, Butcher set no fewer than seven laps quicker than the best anyone else could manage, and finished up a gargantuan 0.270s clear of Tom Oliphant’s West Surrey Racing-run BMW 330i M Sport.

To put this in perspective, the following 11 cars were covered by the margin Butcher had in hand over Oliphant.

“The car’s mega,” Butcher told Autosport. “It’s just one of those things where we seem to have it in the window more often than not.

“After shakedown [on Friday], I said to my engineer, ‘We’re fast, we’re fast.’

“It’s just giving me what I want – I know exactly what I want it to do, and the car’s allowing me to do it.”

The ever-spectacular and ballast-free Smiley ended up in the midfield in the second session, but his morning time was enough to keep him second fastest overall.

Oliphant, who is also running no ballast, ended up third overall across the two sessions with his time from the lunchtime period, set on a 14-lap ‘race’ run, while a last-gasp improvement from Senna Proctor put his BTC Racing Honda Civic Type R – on 21kg success weight – third in session and fourth overall. 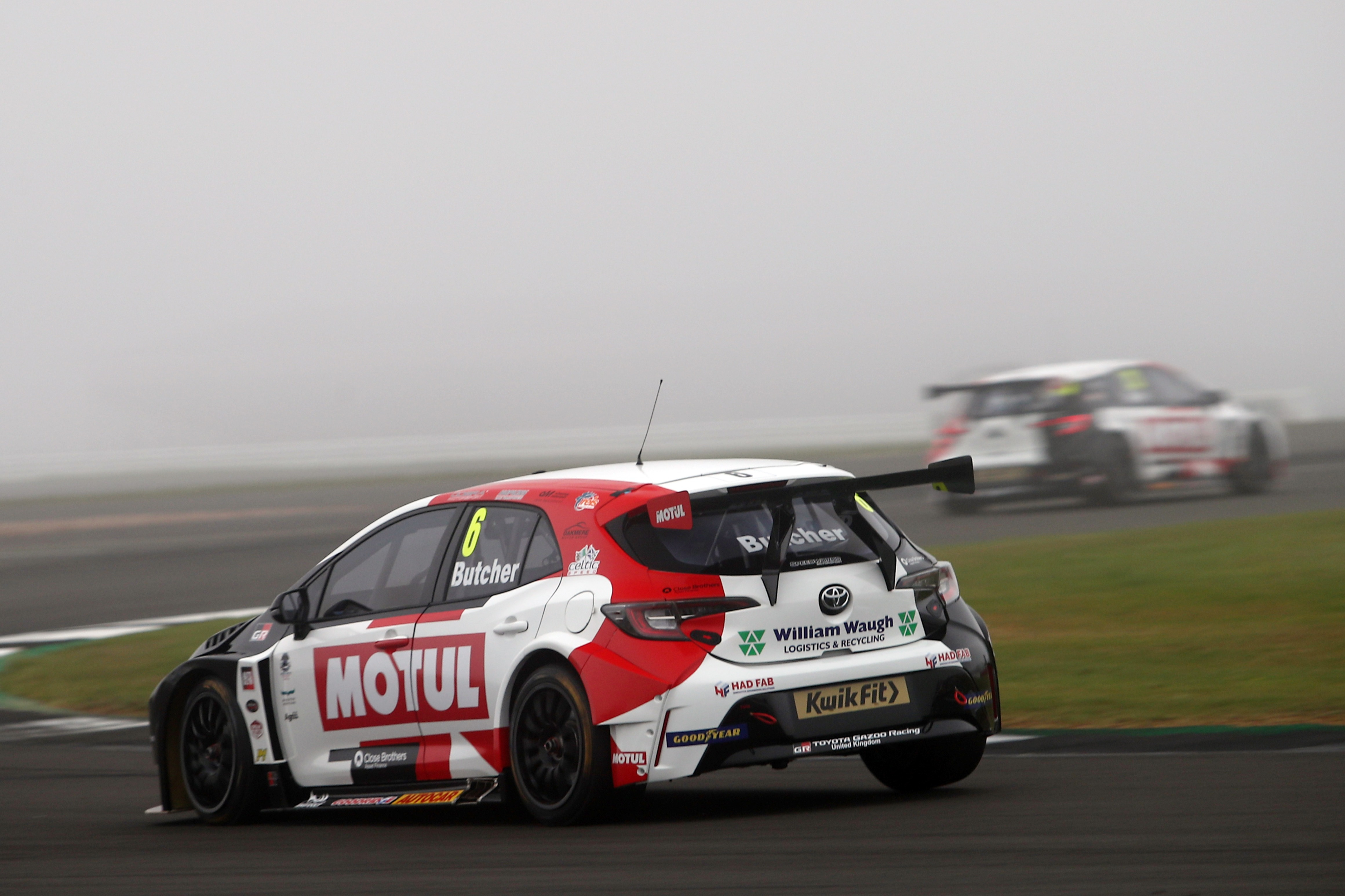 Riding high from his Croft success, Aiden Moffat proved he could pedal his Laser Tools Racing Infiniti Q50 with ballast (27kg worth) as he took third in the first session with a time set on a 16-lap run, but he dropped into the midfield later on, his earlier effort placing him fifth overall.

That put him one spot in front of team-mate Ash Sutton, who as championship leader is carrying the full 75kg of success weight. Sutton was fourth in both sessions, sixth overall, with his best time set on a 13-lap run.

Next up were the Power Maxed Racing Vauxhall Astra of Dan Lloyd and the second Excelr8 Hyundai of Tom Ingram, who is on 39kg of ballast.

Of the other title contenders, Josh Cook was sixth in the morning in his BTC Honda (on 48kg ballast) but 18th later on, while Colin Turkington rose out of the doldrums to place 12th in the lunchtime period in his WSR BMW (57kg ballast).

Current championship runner-up Jake Hill set the slowest time overall across the two sessions in his Motorbase-run MB Motorsport Ford Focus, on 66kg success weight, but did not run new tyres at any time.

A water-pump problem in the first session was rectified before Jordan went 22nd quickest, and he was 25th later on.