Reigning British Touring Car champion and 2021 series leader Ash Sutton led the way in free practice for the third round on the Brands Hatch Indy Circuit.

Sutton, who is carrying the maximum success ballast of 75kg into the weekend on his Laser Tools Racing Infiniti Q50, popped in a lap on a new-tyre run that was 0.236 seconds clear of his previous best to vault to the top of the times.

The Infiniti finished the lunchtime session, in which all the serious runners improved on their earlier best, 0.046s ahead of the Team Dynamics Honda Civic Type R of surprise package Dan Rowbottom.

“It does seem very promising,” said Sutton, “but there’s an element where we don’t know who else has done new tyres.”

Sutton added that, with the ballast he’s running, a realistic target is to qualify in the top 10.

“If I can get in the top five I’ll be well over the moon,” he said. 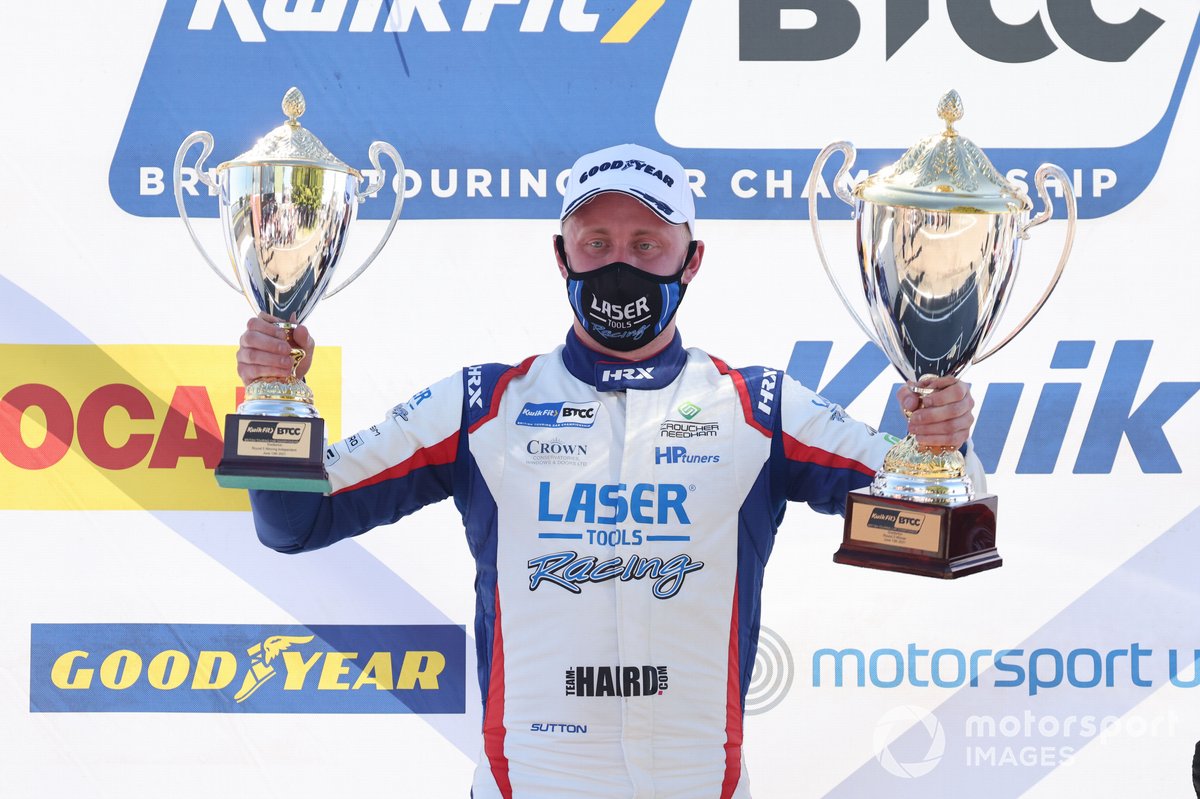 “We’ve got to be realistic with the ballast we’re carrying. Mine was a good lap, but I think people will up their game in qualifying.”

While Sutton had a brief off at Graham Hill Bend, which meant the LTR crew had to remove grass from the radiator, Rowbottom was supremely spectacular as he builds confidence during his second BTCC season at the wheel of his unballasted Honda.

Rowbottom’s theoretical best based on sector times would have put him quickest, but the lap he did was still good enough to edge out the sister Dynamics Honda of Gordon Shedden, who is carrying 9kg of ballast following his disappointments over the opening two rounds.

Shedden also topped the opening, slower, session with a lap just before the chequered flag that edged out the West Surrey Racing-run BMW 330i M Sport of Tom Oliphant.

Tom Ingram is lugging around 66kg of ballast on the Excelr8 Motorsport Hyundai i30 N, but was in the picture in both sessions, and ended up fourth quickest in each after some typically committed driving.

Senna Proctor, on his second outing with the BTC Racing Honda team, was fifth fastest, while Adam Morgan eclipsed the trio of WSR BMWs in ending practice sixth best in his Ciceley Motorsport 330i.

Oliphant was seventh in the quicker session, just ahead of the Power Maxed Racing Vauxhall Astra of Jason Plato.

Stephen Jelley took his WSR BMW to ninth fastest, with the BTC Honda of Josh Cook, on 48kg of ballast, rounding out the top 10.

Notable names further down include four-time BTCC champion Colin Turkington, who was 14th in his WSR BMW (on 57kg ballast) and had a quick off at Surtees.

Hill’s team-mate Ollie Jackson was part of the reason for the only red flag of the 80 minutes of free practice thanks to an off into the gravel at Paddock Hill Bend five minutes into the second period, but he later rejoined the session.