Colin Turkington extended his British Touring Car Championship points lead with victory in race two at Snetterton, which makes 2019 the most successful season for his WSR team

The defending champion started fourth on the grid but was the highest-placed runner equipped with the fastest soft-compound tyre.

The BMW 330i M Sport driver came through a five-way melee for the race lead, at the expense of polesitter Tom Ingram, to win over Dan Cammish by 4.386 seconds.

In turn, he scored WSR's 10th win of the season to surpass 2014 as its best ever year in the BTCC, and with team-mate Andrew Jordan's third place it means WSR also scored its 200th BTCC podium with BMW.

Ingram held position at the start, but a slow getaway for second-starting Cammish allowed a flying Turkington to settle into second place on the inside at Riches.

Jordan too took advantage of the rear-wheel-drive car's superior launch and the soft tyres to move into fourth, with the leading pack edging away from Ollie Jackson's Motorbase Ford Focus RS.

On the medium tyres - 0.5s per lap slower than the BMW's rubber - Cammish allowed Jordan through at Wilson, and from there the 2013 champion closed the one-second lead that Ingram and Turkington had pulled up front. 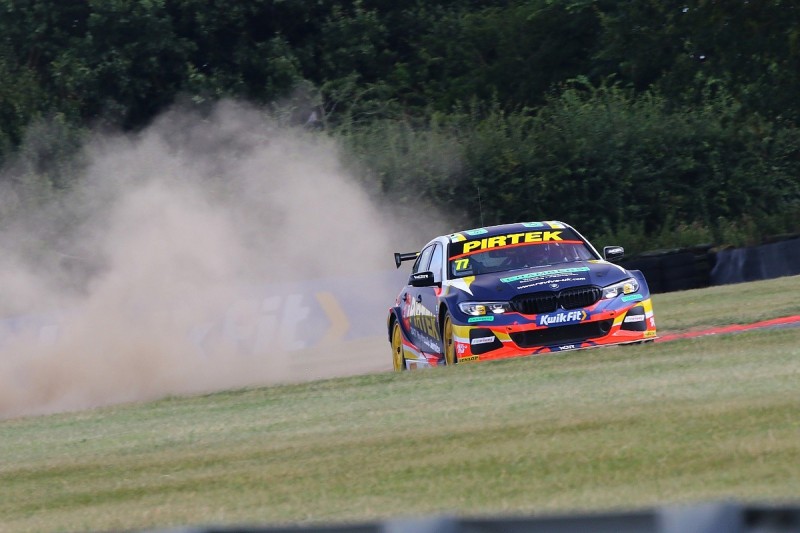 The clear air for Jordan meant he could set the fastest lap of the race, and this prompted Turkington to make his move for the lead.

With a strong tow down the main straight, Turkington nudged Ingram into the Wilson hairpin.

As Jordan tried to fire his car around the outside, Ingram moved over to cover that attack and in the process left the door open for Turkington, who claimed the lead.

Jordan had to take to the grass as Ingram went wide, which promoted Cammish back up into second and subsequent throttle sensor damage to Ingram's race one-winning Toyota Corolla dropped him down to an eventual 23rd.

Jackson held on to fourth to score his best result of the year, with Sam Tordoff and Jason Plato completing the top six.

Ashley Sutton recovered from 12th on the grid up to finish seventh ahead of Chris Smiley - who was then drawn on pole for the partially reversed race three grid.

Matt Simpson and Jake Hill closed out the top 10 ahead of third BMW driver Tom Oliphant and Rory Butcher.