Knockhill has recently been resurfaced which has resulted in a number of kerbs being lowered compared to the Tarmac.

Jordan had missed the opening 10 minutes of the first 40-minute session as the power steering rack on his BMW was not working correctly.

When he joined the action, he clocked the third best time before improving in the later 40-minute period.

The 2013 champion said: "We are in the ballpark straight away, which is pleasing. We are great in sectors two and three, so we will look to improve the car in sector one for qualifying without taking anything away from our overall performance. We have a few things to try."

Team Dynamics Honda Civic racer Dan Cammish was rapid too in the second session in his ballast-free car, leaping up to second place in the dying moments after a red flag to retrieve the stranded Civic of Matt Simpson (Simpson Racing).

Reigning champion Ash Sutton placed his Subaru third overall in a time set during the opening session - which he topped.

He said tweaks made to his Team BMR Subaru had not worked in session two, and he could only manage 13th spot.

"We have gone backwards in terms of speed - I think we went in the wrong direction, so now we will have to pull it back," he said. 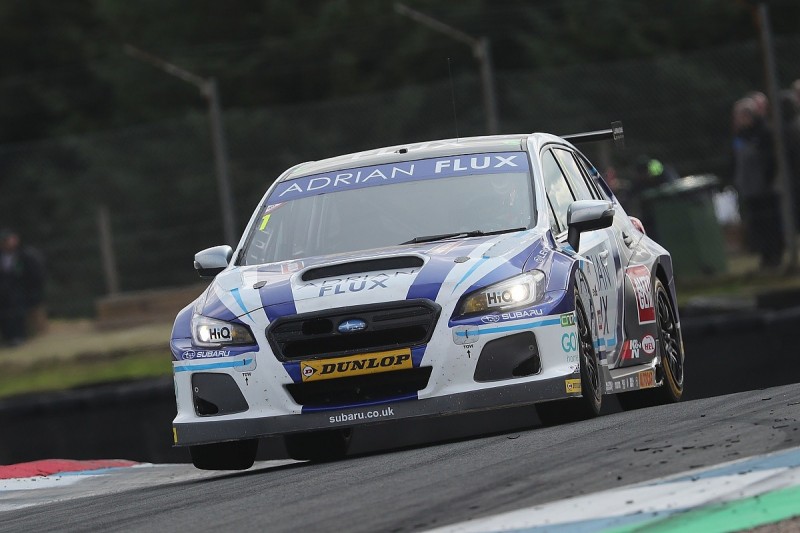 "We know the car set-up was good in session one, so we know where to go back to. I think the resurfacing of the track, plus the extra 30kg of ballast that the rear-wheel-drive cars have to carry this year, have made this a tough place for us. The smoother Tarmac suits them.

"I am happy with the time from FP1 given the weight I am carrying. People keep having to remind me I have 57kg on board, so it is not all bad."

Jack Goff relied on his free practice one time to be fourth fastest overall in his Eurotech Racing Honda Civic Type R, ahead of Ciceley Motorsport Mercedes-Benz A-Class of Adam Morgan.

A winner last time out at Rockingham, Morgan said he was pleased with the immediate speed. "I think we will have a good shot at qualifying," he explained.

"The car has been great out of the box and we will just tickle it from this point - it is a question of just keeping it there.

"It will be tough in qualifying with the traffic and also, where they have topped up the gravel traps to go with the new Tarmac, the circuit is getting very dirty later on in the sessions. Getting a clear - and clean track - is going to be vital."

Championship leader Colin Turkington, carrying 75kg of success ballast on his WSR BMW 125i M Sport, was 12th in the second session. His main rival, Tom Ingram in the Speedworks Toyota Avensis with 66kg, set a best of 51.667s lap.

That put him 16th in session two, although he had placed 10th in session one. "The car feels great," he said.

"It is just lovely, really really nice to drive and I am not sure there is a lot else we can do to it - apart from maybe find a faster driver! We will tweak it slightly into qualifying trim, but we are in a good place: we just need a clean lap."