Hill used the traction advantage of his rear-wheel-drive West Surrey Racing BMW 330e M Sport to retain the lead at the start from pole position, but crucially Sutton did not concede any positions to the phalanx of BMWs behind in his front-driven Motorbase Performance Ford Focus.

Sutton was absolutely lit on the opening lap, getting sideways at the chicane in his pursuit of Hill. He attacked the BMW into the hairpin, drawing to the outside.

They both accelerated up the start-finish line side by side, before Sutton swept around the outside into Duffus Dip with a breathtaking move.

Sutton benefited from the front-wheel-drive advantage of his tyres switching on quicker than those on the BMWs, but this did not take long to be negated and Hill came back at him.

On the fifth lap, Sutton dropped his left-rear wheel in the gravel at the chicane, lost momentum, and that allowed Hill to get a run on him. Sutton covered the line into the hairpin and his braking caught out Hill, who punted him up the rear.

Two laps later Hill, his BMW’s bonnet crumpled from the contact with Sutton, breezed ahead on the start-finish straight to lead into Duffus, but left a chink of light on the inside into McIntyre, allowing the Ford back in front. 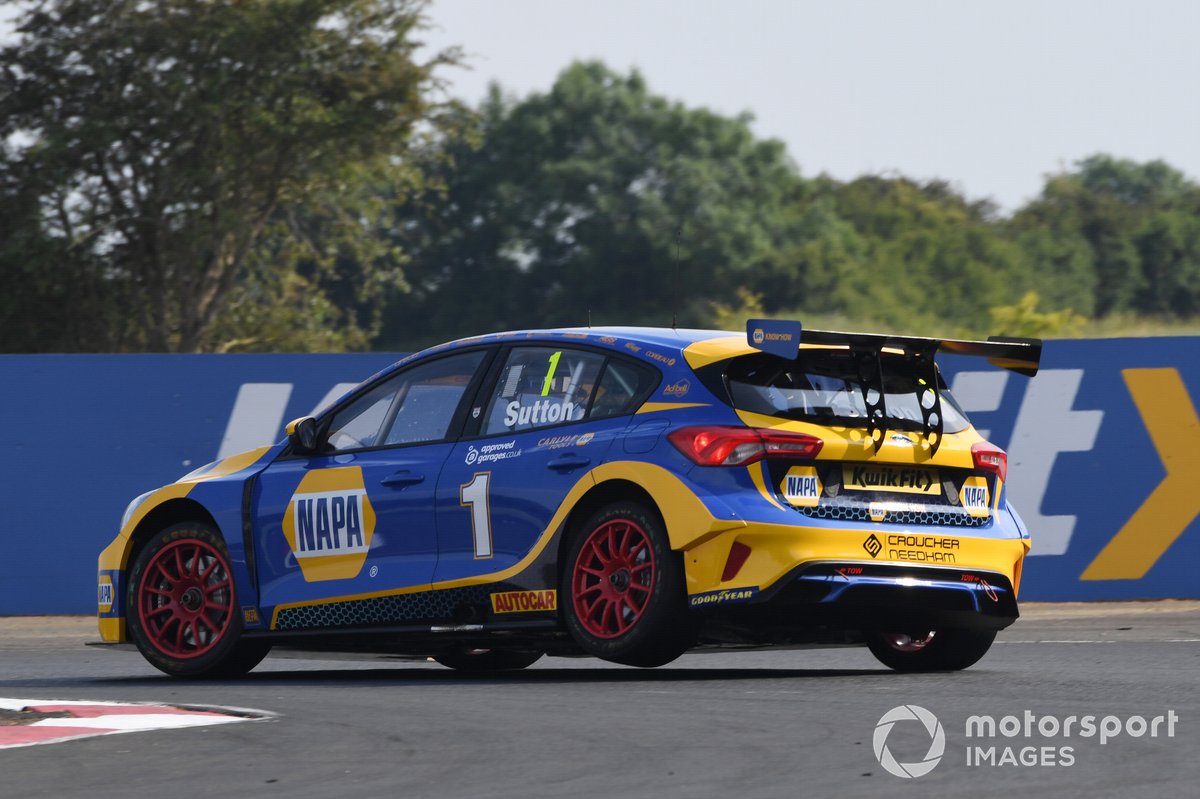 Another two laps on, Hill drew alongside as they passed the pits and was once again on the inside for Duffus, this time defending his line at McIntyre.

Over the remaining 15 laps, Sutton had to turn his attentions to fending off the second WSR BMW of Colin Turkington, who had thought better of trying a risky move on Hill earlier in the race.

As had Hill, Turkington gave Sutton a shove up the rear at the hairpin – although in his case lighter and less bonnet-damaging – and swarmed all over the reigning champion for most of the rest of the race, but Sutton held firm.

Up front, Hill was 3.640 seconds clear as he took the chequered flag.

“It was a pretty frantic start to that race,” he said. “We always struggle over the first couple of laps with the front tyres.

“I stayed with Ash for a couple of laps and then the car came alive – it was on fire.

“I didn’t mean to hit him at the hairpin, but he braked so early. But I managed to get the move done a couple of laps later and drove off to take the win.”

Stephen Jelley played his part in a fantastic race for the WSR squad to complete a 1-3-4, although he had the Ciceley Motorsport BMW of George Gamble pressuring him throughout.

Shadowing them was championship leader Tom Ingram’s Excelr8 Motorsport Hyundai i30 N, which passed Rory Butcher on the fourth lap but could not depose the BMWs.

Butcher, at the wheel of his Speedworks Motorsport Toyota Corolla, lost seventh place on the final lap to the Team Dynamics Honda Civic Type R of his brother-in-law Gordon Shedden, and Dan Cammish in the second Motorbase Ford was right in Butcher’s wheeltracks at the finish, with the other Toyota of Ricky Collard right behind him.

Former series leader Josh Cook got his BTC Racing Honda up to 10th place, on Shedden’s tail, early doors, but a moment dropped him to 14th, and he ultimately lost that position in an entertaining all-ginger battle with Adam Morgan.

Morgan had qualified his Ciceley BMW fourth, but stopped on his lap to the grid and was towed back to the pits – he was forced to start from the back of the field.