The WSR BMW 125i M Sport driver made a great getaway from second on the grid to beat Ash Sutton, who had taken victory in the day's opener, to the first corner.

Subaru Levorg GT driver Sutton came back at Turkington coming around the next turn, Hawthorn, but as the pair tried to go side-by-side through the chicane, Sutton skipped through the run-off area and sealed the position.

Sutton kept the pressure on Turkington throughout, but the 75kg of success ballast on his car meant he dropped back in the latter stages and came under attack from the second BMW of Rob Collard.

But when Collard slipped and ran wide at the Jim Clark Esses with two laps to go, the top three positions were settled.

Turkington, who was carrying 66kg of success ballast after finishing second in race one, said: "Wins are never easy to come by in this championship and I had to work hard for that one.

"[But] the race was won at the start really.

"I could see Collard coming up behind Ash and I hoped he had the pace to trouble him.

"It was only in the latter part of the race I was able to get away."

Sutton was mystified by a loss of pace over the latter part of the race, particularly during the last two laps where he dropped well back. 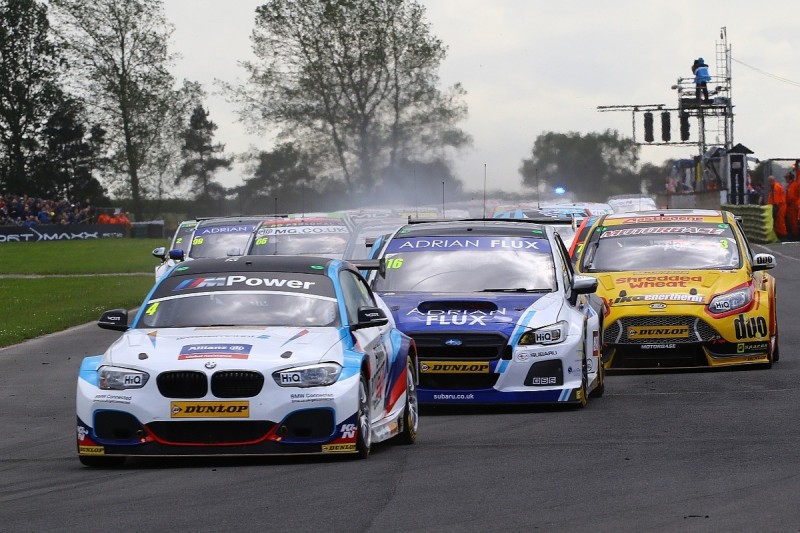 "It was like someone had flicked a switch in my car at the end of the race," he said.

"We need to look at the set up. But I still can't understand how I went into the chicane ahead and then came out of it behind Colin [after he'd gone up the escape road]."

Turkington's victory was the 50th by the WSR team when running BMW cars.

Behind the top three, Gordon Shedden had a lonely run to fourth from fifth on the grid, fitted with the less favourable harder tyres and 48kg of success ballast.

But it was enough for him to retain his championship lead.

Andrew Jordan and Jason Plato fought a mighty duel over fifth place, with Jordan just able to maintain the advantage to the flag.

Mat Jackson, who was also on the harder tyres, slipped from third on the grid to finish in seventh place while carrying 57kg of ballast.

He headed the battling Toyotas and Audis of Rob Austin and Ollie Jackson, while Martin Depper rounded out the top 10.

Matt Neal started from the back in race two in his Team Dynamics Honda Civic Type R after contact and a puncture ruled him out of the opener.

Despite a collision with a tyre stack midway through race home, he came home to finish in 18th spot.

Ollie Jackson has been drawn on pole position for the final race of the weekend.