Goff took his Eurotech Honda from pole position to an immediate advantage, but Turkington's WSR pressed him all the way.

Despite getting alongside on a couple of occasions, the Northern Irishman was unable to usurp the leader who crossed the line 0.5 seconds ahead.

Goff said, "what a great way to start the season - it was almost perfect, although I did make one small mistake that almost gave Colin a chance to jump me. I was at maximum concentration all the way through that. We couldn't really have asked for any more, and it has been a reward for all the hard work everyone has put in."

Turkington said he tried to grab the chance when Goff ran slightly wide coming off Clearways at half distance, but had to back out of it.

"He was wide, and I tried the inside but it was so slippery there that I just couldn't get the power down.

Towards the end, when the rain stopped, Jack's car was better than mine and he was just able to edge away. I will take second place though, I am happy with that."

Behind them, Andrew Jordan took third place in his WSR BMW 125i M Sport after an early battle with newcomer Dan Cammish in the Team Dynamics Honda Civic Type R.

Cammish held on for 10 laps until Jordan reasserted himself going into Paddock Hill Bend. Cammish dropped down the order as the handling of his Civic deteriorated. 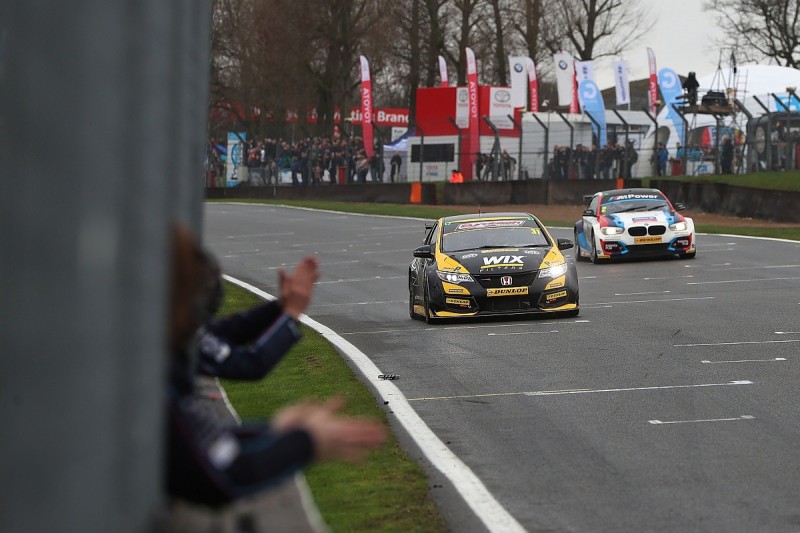 That allowed Tom Ingram into fourth place in the Speedworks Toyota Avensis when he jumped his rival at Paddock Hill Bend on lap 15.

Ash Sutton's drive from 18th on the grid to seventh place in the Team BMR Subaru Levorg was a highlight.

The 2017 champion overhauled Cammish on the final lap to seal the position. Cammish narrowly held off Chris Smiley (BTC Norlin Honda) to the line.

However, Smiley was penalised for 'gaining an unfair advantage' in a clash with James Cole, dropping Smiley to 10th behind Cole's Motorbase Ford.

Front row starter Sam Tordoff was ruled out after a lap-one collision. The Motorbase Focus racer was slow on the opening lap and a concertina effect into Clearways meant he was in contact with Matt Simpson's Honda.