Toyota star Tom Ingram completed a last-to-victory recovery across the British Touring Car Championship round at Croft by winning the reversed-grid finale.

Ingram, who was excluded from qualifying after provisionally taking pole position in his Speedworks Motorsport-run Corolla, soaked up massive pressure from Dan Cammish over the last couple of laps to take the chequered flag by 0.278 seconds.

It was another dramatic race as far as the title race is concerned, with four-time champion Colin Turkington once again hitting trouble on the opening lap.

And, just like the previous round at Silverstone, the final race of the day at Croft also featured a horrific accident, with Bobby Thompson barrel-rolling his Trade Price Cars Audi S3 but walking away from the wreckage.

Ingram started third on the grid, but dispatched Cammish into the first corner, and then pulled off a superb outside pass on polesitter Tom Chilton in the BTC Racing Honda Civic Type R to take the lead at the Jim Clark Esses.

By the end of the second lap, Ingram had pulled out a huge 2.694s margin on Chilton, but then the safety car was called.

Thompson had just lost eighth spot to Senna Proctor, and was running side by side with the Hyundai on the run to the Jim Clark Esses when he ran out of road and went onto the grass.

The Audi slid sideways and then, once it dug in, it flipped end over end before coming to a rest.

Ingram aced the restart and was 0.924s to the good as the cars crossed the line, and Cammish spent five laps swarming all over Chilton before finally squeezing past for second with a late dive into Tower. 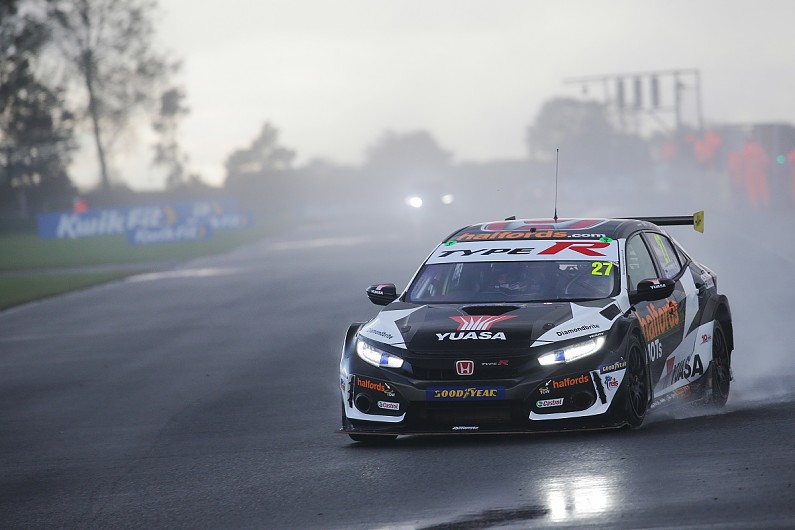 Six laps remained, and Ingram was 1.671s to the good, but was suffering from a severe vibration at the right front.

That enabled the Team Dynamics-run Honda of Cammish to close in, but Ingram held firm to take victory.

Behind third-placed Chilton, Matt Neal completed a good day in the other Dynamics Honda to claim fourth.

But Neal only just held on from a charging Ash Sutton, who produced one of his traditional fighting drives to haul the Laser Tools Racing Infiniti Q50 up from 20th on the grid.

Sutton came up against a stout defence from the West Surrey Racing-run BMW 330i M Sport of Tom Oliphant, before finally making it past for fifth into the chicane on the penultimate lap.

He just ran out of time to catch Neal, drawing alongside at the flag, but continues to lead the championship.

Cook, the winner of the first two races at Croft, suffered a suspected broken roll bar, and couldn't challenge at the front.

Proctor finished ninth, with the other Laser Tools Infiniti of Aiden Moffat completing the top 10.

There was disaster again for Turkington following his second-race exit.

The Northern Irishman broke a left-front toelink in a clash with Ollie Jackson on the opening lap and, after pitting for repairs, he rejoined four laps down and claimed the point for fastest lap.

It means that Turkington has now slipped to third in the points, 12 behind Sutton and five adrift of Cammish, with Ingram in turn 17 points behind.